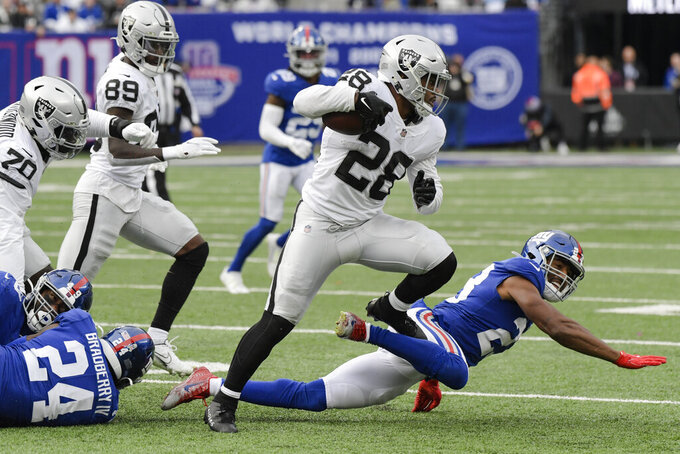 HENDERSON, Nev. (AP) — Interim Raiders coach Rich Bisaccia has said it will take production from all three phases for Las Vegas to be competitive.

To compete in the AFC West, the Raiders must have both sides of the offense clicking — a diverse passing game, and power rushing game.

The passing game is doing its part, currently ranking fourth in the NFL with 2,441 yards. The rushing game is an entirely different story.

Ranked 28th with 715 yards, the Raiders struggled on the ground over their first six games, topping 86 yards just one time, a 140-yard effort in a 31-28 overtime win against Miami in Week 3. Overall during that span, they averaged 79.8 yards per game and 3.3 yards per attempt.

But if the last two weeks are an indication of improvement, the Raiders should be optimistic heading into a huge division showdown against the Kansas City Chiefs on Sunday night.

The Raiders rushed for 119 yards in a 33-22 win over Philadelphia on Oct. 24 and for 117 yards in a 23-16 loss at the New York Giants last Sunday. The Raiders' 5.9 yards per attempt against New York were a season-high in a game during which Las Vegas ran the ball just 20 times, second-fewest this year.

Leading rusher Josh Jacobs rushed for a season-high 76 yards on 13 carries (5.85 yards per attempt) in New York, while Kenyan Drake turned in 100 yards of offense, 30 of them on the ground.

“I think we’ve done some things, and they’ve done some things as a group, to improve,” Raiders offensive coordinator Greg Olson said. “I wouldn’t say we simplified it, but we’re kind of trying to find an identity. I think we are closer to finding that identity as an offense in terms of (the) run game. Happy with the improvement but there is still a long way to go, and we got a lot of football left.”

It’s helped, Olson said, that an offensive line that was struggling with continuity earlier in the season has improved tremendously under veteran O-line coach Tom Cable.

“They were a young group of guys; I know offensive line it’s about chemistry, getting a feel for everybody,” defensive lineman Quinton Jefferson said. “Those dudes work their tails off every single day. I tell them every day that I got much respect.”

The Chiefs have allowed the fifth-most rushing yards this season (1,096) while the 4.7 yards per attempt they’re yielding is the fourth-highest in the NFL.

Overall, the Chiefs rank dead last in allowing 6.3 yards per play and have allowed 2,337 yards passing, sixth-most in the NFL.

With a balanced attack, the Raiders have a good chance to bounce back in what is an important division showdown against the two-time AFC champs.

“The division game is always something we talk about, the best chance to get in the playoffs is win your division,” Bisaccia said. “We’ll be back playing at home and it’s the Kansas City Chiefs. The historic rivalry, we’re all very aware of that. But it’s a game for us that we’re coming off a game where we lost so we’re excited about the opportunity to play football again.”

NOTES: The Raiders will commemorate Charles Woodson’s induction into the Pro Football Hall of Fame with a ceremony before Sunday night’s game at Allegiant Stadium. Woodson will be joined by other Raiders Hall of Famers for the tribute. ... Bisaccia said LB Nick Kwiatkoski (ankle) and S Tyree Gillespie (hamstring) are out for Sunday. CB Keisean Nixon (ankle) and Amik Robertson (hip) are listed as doubtful.