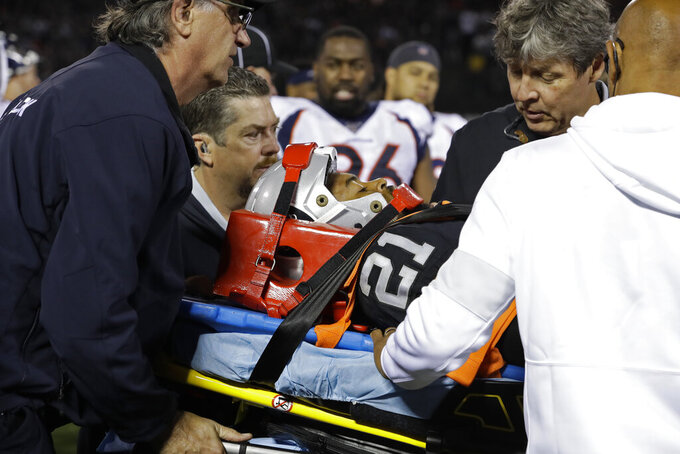 ALAMEDA, Calif. (AP) — Oakland Raiders rookie safety Johnathan Abram will be placed on injured reserve after suffering a season-ending injury to his shoulder in the season opener.

Abram was injured in the first half Monday night against the Denver Broncos. He finished the game but will need to undergo surgery Thursday.

"It's a big loss. No question it's a big loss," coach Jon Gruden said Wednesday. "We'll hope to get John back. We'll keep him around here, let him learn the defense and we'll consider this a redshirt year for him. But he made some big plays to help us win a game and he's a big part of our future."

The Raiders were counting on Abram to be a key part of a revamped defense after drafting him 27th overall in April with the pick acquired from Dallas in last year's Amari Cooper trade.

Abram brought high energy and physical play that had been lacking at times in the past for Oakland. His aggressiveness was apparent in the opener when he had five tackles and the pass breakup that led to his injury.

"It's a big loss, man," defensive end Josh Mauro said. "Just his energy. He caught on to the defense really quickly. He was definitely years above his age on the mental side of things in the game. It hurts. I just wish him a speedy recovery. He's a great teammate, a great person, I love having him on our team. I love playing on the same side of the ball as him and I just hope he recovers as fast as he can."

With Abram out, the Raiders will likely give more time to Curtis Riley alongside the other starting safety, Karl Joseph. Lamarcus Joyner also has experience at safety but has been playing almost exclusively as a slot cornerback and Oakland also has Erik Harris, who started four games last year, and Dallin Leavitt.

Abram sent out a message Wednesday on Twitter, saying "it's all about perseverance."

The Raiders did get some positive injury news in the secondary with cornerback Gareon Conley returning to practice two days after being taken off the field on a stretcher with a neck injury.

Conley got hurt when he was accidentally kicked on the top of the helmet by Abram while the two were tackling Royce Freeman in the third quarter. Conley reached for his head in pain immediately after his neck was compressed. He stayed on the turf for several minutes while players kneeled in concern nearby. Conley was strapped to a stretcher and taken to a hospital as a precaution.

He said Tuesday that he was feeling fine and was able to do almost everything during practice in preparation for Sunday's home game against Kansas City.

Rookie Trayvon Mullen struggled in Conley's place and the Raiders will likely need their starting cornerback healthy against Patrick Mahomes and one of the NFL's most dangerous passing offenses.