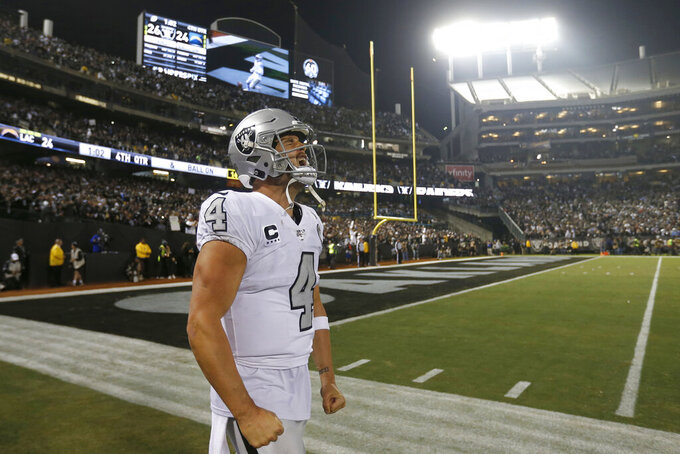 Carr began his rookie season as starting quarterback for the Oakland Raiders with 10 consecutive defeats before finally breaking through with a win.

"You feel like everything is against you because for the fans, sometimes for older players, they don't see any light at the end of the tunnel," he said. "They just see what's in front of them at the moment and it's hard man. It's tough and one thing I'll say though is, if you can grind through those moments, work really hard, stick to your process, when the good moments come around it makes you thankful for those other moments."

Carr bounced back from the rough debut campaign to win 12 games and lead the Raiders to the playoffs in 2016. Two more down seasons followed, but Carr has Oakland (5-4) back in contention again this year heading into Sunday's home game against Cincinnati (0-9).

After two straight wins to open a homestand, Carr wants to make sure his team doesn't let up in the third game and squander a chance.

"I don't care about records, man," he said. "I prepare every game as if this is the game and so there is no, 'They haven't won a game.' I don't care how many games they have or haven't won, they got Pro Bowlers all over their football team and they are going to bring it, that's for sure."

The Bengals are trying to avoid falling to 0-10 for the second time after also doing it in 1993. First-year coach Zac Taylor believes things will get better soon even if it doesn't seem that way right now.

"There'll be a time — I can't wait to look back on it — and say, 'Remember when all that stuff happened?'" Taylor said. "We'll get there. This is one of the things we have to go through right now, unfortunately. We're going to fight through it, and there are going to be some positive things as this season comes to an end."

Rookie Ryan Finley made his debut and had two huge turnovers against the Ravens. His sideline pass was picked off and returned 89 yards for a touchdown, and he had a fumble also returned for a score. Finley finished 16 of 30 for 167 yards with a touchdown, one interception and a passer rating of 66.9. The Bengals expect him to be better now that he's experienced a game.

"He's getting used to playing NFL-caliber football and not preseason football, real starting football against a good defense," offensive coordinator Brian Callahan said. "And so, his timing was a little bit off. I think you'll see a pretty dramatic leap for him in game two, understanding what it's like to play at that speed."

The Raiders must replace a safety again after Karl Joseph went down with a season-ending foot injury last week while making the game-sealing interception against the Chargers. Oakland already lost rookie Johnathan Abram to a season-ending shoulder injury in the opener and now may need to turn to Curtis Riley, who got benched earlier this year, special teams player Dallin Leavitt and newly acquired D.J. Swearinger, who was cut earlier this year by Arizona.

"These last weeks have been great for me," Swearinger said. "I needed this time off, to get myself together. I couldn't be more ready for this opportunity to get here and work hard."

The Bengals began looking to next year when they benched Andy Dalton and went with Finley at quarterback. They started overhauling the defense this week by waiving linebacker Preston Brown, who had lost his starting job. The linebackers have been the biggest sore spot in the league's lowest-ranked defense.

The Raiders’ much-maligned pass rush delivered in a big way last week with five sacks in a win over the Chargers. No. 4 overall draft pick Clelin Ferrell had by far his best game as a pro with 2½ sacks after recording none since the season opener. Fellow rookie Maxx Crosby provided consistent pressure and a half-sack of his own and Benson Mayowa had 1½ sacks, giving him a career-high seven this season.

Taylor signed with Oakland coach Jon Gruden's Tampa Bay team as an undrafted quarterback out of Nebraska in 2007. He was waived before the start of training camp, a move that surprised him then but makes sense now. Taylor was familiar with Tampa Bay's system because his college coach, Bill Callahan, was a close friend of Gruden's.

"I think they probably just brought me in because I could call the plays in the rookie minicamp," Taylor said. "In hindsight, those are the things you start to figure out as you start coaching. That made a little bit of sense. They could evaluate the other players while I got out there and called the plays correctly. It's all good."

This story has been corrected to show the Bengals are looking to avoid a second 0-10 start, not third.