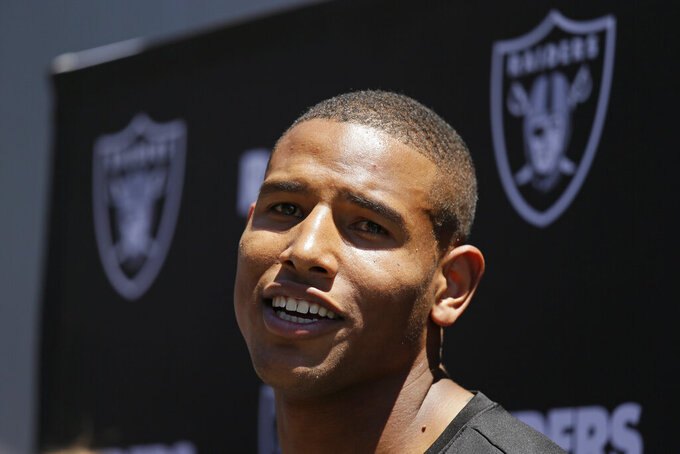 Now the leading candidate to replace Jared Cook as Oakland's top tight end, Waller credits those early setbacks with getting him back on track.

"At the time it seemed like a whole lot but I've been able to learn that the most uncomfortable work is the one that pays off and makes things much more enjoyable," Waller said Tuesday at the start of the Raiders' three-day mandatory minicamp. "It's been a whole lot of hard work, a whole lot of just making sure that I'm consistent."

Waller missed all of 2017 after being suspended by the NFL for one year following a second violation of the league's substance-abuse policy. That came on the heels of a four-game suspension in 2016 when Waller acknowledged using marijuana.

Waller returned to the NFL in 2018 but didn't play until the Raiders claimed him off the Ravens' practice squad. He played in four games late in the season and caught six passes for 75 yards.

Though a small sample size, it was enough to convince Oakland to keep Waller around. When Pro Bowl tight end Jared Cook signed with New Orleans as a free agent, Raiders coach Jon Gruden quickly dubbed Waller a leading candidate to replace Cook.

"Since he's been here he's been one of our most impressive players," Gruden said. "He played a key role last year when he got here. He's got some big shoes to fill. I know he respects that. He's versatile, he's smart, he's fast. He wants to do good."

A sixth-round pick of Baltimore in 2015, Waller was drafted as a wide receiver before converting to tight end in 2016. That was right at the start of his off-field troubles which Waller acknowledged carried over to what he did on the field. He caught 12 passes in 18 games with the Ravens.

It's an issue the 26-year-old Waller said he no longer has to worry about.

"That gives me a place to feel good about myself and respect myself when I look in the mirror," Waller said. "Before, I couldn't really do that and those kind of things translate to the field where it's like you're kind of hesitant out there, you're not too sure of yourself. But now I wake up and I'm doing what I'm supposed to be doing in my life and representing my family in a positive way. That goes a long way into me taking on a heavier load and having the confidence in myself to carry it out.

"I just tried to prepare myself to come back and contribute again. I didn't really look as far as how big my role would be but that if my work was there and I was staying clean and being consistent in what I was doing that my role would increase at some point."

Cook's departure as a free agent was a big hit to the Raiders offense. In two seasons with Oakland, Cook caught 122 passes for 1,584 yards and eight touchdowns, often serving as a safety net for quarterback Derek Carr.

Gruden and general manager Mike Mayock overhauled the team's receiving corps in the offseason, highlighted by the acquisition of Antonio Brown. That could mean fewer opportunities for the tight ends, although Waller's maturation should keep him in the mix.

At the very least, it's given Waller another shot in the NFL, something he has reminded himself of this offseason.

"Staying clean, number one of course, just doing something every day involving football," Waller said when asked about his daily routine. "Making sure that I know that all I have is today. I don't really have any days that are promised and I can't live my life that way."

Notes: Cornerback Gareon Conley worked out on his own in a nearby weight room. . Gruden said Mayock and representatives for Rodney Hudson have been in talks regarding a possible contract extension for the two-time Pro Bowl center. . The Raiders are discussing holding joint practices with the Los Angeles Rams prior to their Aug. 10 preseason game. . Oakland signed WR Montay Crockett and CB Isaiah Langley. DB Makinton Dorleant and S Montrel Meander were waived.