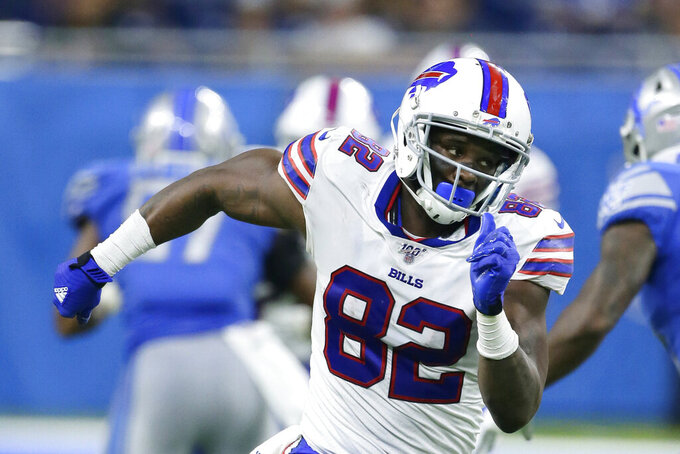 FILE - In this Aug. 23, 2019, file photo, Buffalo Bills wide receiver Duke Williams (82) breaks down the field against the Detroit Lions during the second half of an NFL preseason football game in Detroit. Having already quit football once, receiver Duke Williams wasn't going to give up on his second chance once he failed to make the Buffalo Bills final cuts before the start of the season. Five weeks later, the 26-year-old rookie scored the go-ahead touchdown in his NFL debut a day after being promoted off the Bills practice squad. (AP Photo/Duane Burleson, File)

ORCHARD PARK, N.Y. (AP) — Duke Williams stopped dreaming of scoring his first NFL touchdown some three years ago, when the receiver essentially walked away from football.

Williams had no desire to continue playing after going undrafted in 2016 and then being cut by the Los Angeles Rams before the start of the season.

And it sure looked as if the NFL had no interest in a once-promising player with a checkered past after Williams was kicked out of Auburn five games into his senior season following a bar fight in which he broke a teammate's jaw.

"I wasn't thinking about football no more," Williams said Monday, when he rejoined the Buffalo Bills (4-1) for practice following the team's bye week. "I didn't know what I was going to do."

Williams has made the most of second chances during a career arc that has impressed and surprised many, including him.

He spent two years in Edmonton, Alberta, where he led the Canadian Football League with 1,579 yards receiving last season. He signed with Buffalo in January but was among the team's final cuts in August.

Williams then went from spending the first four weeks on Buffalo's practice squad to scoring the decisive touchdown in a 14-7 win at Tennessee in his NFL debut as a 26-year-old rookie on Oct. 8.

With Buffalo facing third-and-3 from Tennessee's 7, Williams burst inside and had a step on a defender to make a two-handed grab of Josh Allen's pass with 9:46 remaining.

"I had my days and my doubts, like, 'Man, this is not going to work out,'" he added. "But at the end of the day, I overcame adversity and it made me the man who I am today. I don't regret nothing."

He finished catching all four passes thrown in his direction for 29 yards, and was second among Bills receivers in playing 50 snaps as he took over the slot receiver's role previously held by Zay Jones.

Williams' performance was so encouraging, the Bills traded Jones — a former second-round pick — to Oakland the following day for a 2021 fifth-round draft pick.

"I think it was timing more than anything, but it helps to know the guy you brought up came in and it wasn't too big for him, but I never thought it would be for Duke," Beane said.

Williams will be expected to do more of the same on Sunday when Buffalo hosts Miami (0-5).

At 6-foot-3 and 225 pounds, Williams is Buffalo's tallest receiver, and has also shown an ability to use his big body as a blocker and outmuscle defenders.

Williams first caught the Bills' attention in the preseason when he had eight catches for 71 yards and two touchdowns, mostly against second- and third-string defenses.

Failing to make Buffalo's season-opening roster didn't bother Williams, who instead took it as one more challenge to overcome.

"I wasn't mad. I was happy I still had a job," Williams said. "It was a blessing. I still attacked the day and attacked practice as if I was playing that Sunday. I never took a day off."

Coordinator Brian Daboll said Williams is the type of player he roots for because of his work ethic and perseverance.

"He has had a lot of obstacles in his life that he's had to overcome which have made him into the guy he is," he added. "He came to work every day when he was on the practice squad, got better, knew the game plan. And those are the guys you bring up in-house that you'd like to give an opportunity to when they earn it. And he's certainly earned it."

Williams knows better than to take his debut lightly. He initially balked at an interview request because his first priority was heading to the weight room for a post-practice workout.

"You can never take anything for granted because as soon as you do, that's how fast it can be taken away," Williams said. "It was all fun and games last week, but it's a business now, you know."

NOTES: Backup RB Devin Singletary, who has missed three games with a left hamstring injury, and TE Tyler Kroft, who has yet to play this season with right foot and left ankle injuries, both took part in a brief non-contact practice. ... LB Matt Milano (hamstring) worked out individually. ... The Bills signed WR Jordan Veasy to their practice squad.