Redemption in hearts of Jets' improved defense vs. Bills 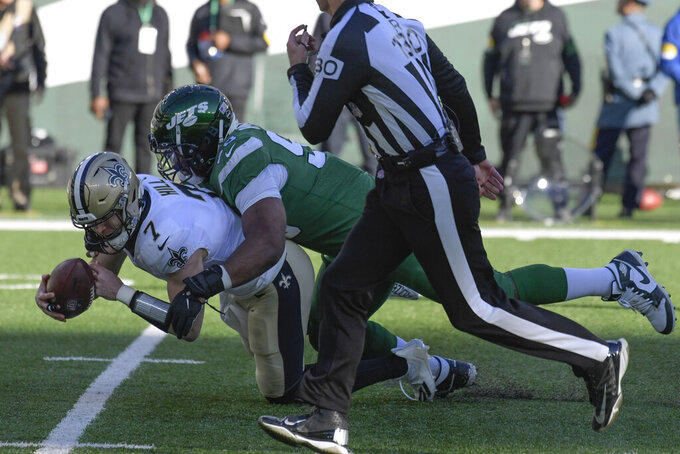 The sting from that game in November remains as the teams prepare to square off Sunday at Buffalo.

“Redemption is definitely in our hearts," Rankins said.

And the goal isn't necessarily to ruin the Bills' chances of winning the AFC East.

For the Jets (4-12), it's about using the game as a building block heading into next season.

“Just understanding that when you play this game, the tape is your resume,” Rankins said. “We’re not trying to stand on the fact that they put all those points up on us last time. We’re trying to right the ship with this one and come out with a better effort and hold that offense to as minimal points and minimal yards as possible.”

The defense, which New York hoped would be a strength this season, has struggled mightily because of injuries, inexperience and lack of execution. The Jets rank last in the NFL in overall defense and scoring, and 29th in both passing and rushing defense.

Those numbers won't change much with one game left, but the unit has played better the past few weeks.

“When you’re raising a young defense like we are right now, we’re getting these scars, these battle wounds,” defensive coordinator Jeff Ulbrich said. “I’d like to think that as much as that hurt, that failure will lead to the defense we’re trying to create here, a championship-level defense.”

In the seven games since the debacle at Buffalo, the Jets have allowed more than 400 yards only twice — against Philadelphia in a 33-18 loss in Week 13 and against Tom Brady and Tampa Bay in a 28-24 loss last week. The Jets had the lead until the final seconds against the Buccaneers when Brady threw a perfectly placed 33-yard touchdown pass to Cyril Grayson for the win.

“I know nobody wants to hear that and I know we've got to make that play and we've got to win that game and we've got to finish it,” Ulbrich said. “But at the same time, I’m highly confident, for what this is worth, that those guys that were involved in that play, we call that again, that will never happen again.

"And when we’re playing for championships here, that’s going to be one of the reasons that we win them.”

Ulbrich said improvement and progress are the goals heading into the final game, and having a good performance against the playoff-bound Bills is “like the ultimate measuring stick of where we are, how far we’ve come.”

By facing two playoff teams in their last two games, the Jets get a look at where they hope to be someday.

“We always know to be a playoff contender in this league, you have to own your division," Ulbrich said. “And you have to create an impression and you've got to dominate your division opponents.

"So, part of it's improvement, part of it’s to let this division know it’s not the same old Jets team that they’ve been accustomed to.”

NOTES: WR/KR Braxton Berrios was placed on injured reserve after missing practice all week with a quadriceps injury. He had a breakthrough season, leading the NFL in kickoff return average and ranking second on the Jets with 46 receptions for 431 yards and two TDs. ... RB Michael Carter is out of concussion protocol and practiced Thursday and Friday. ... WR Jamison Crowder is set to return after missing two games with a calf injury. ... Robert Saleh on one of the unexpected things he has experienced during his rookie season as a head coach: “I was talking to my wife last night, I think I’ve lost about 25 pounds, so I've got to get that back.”