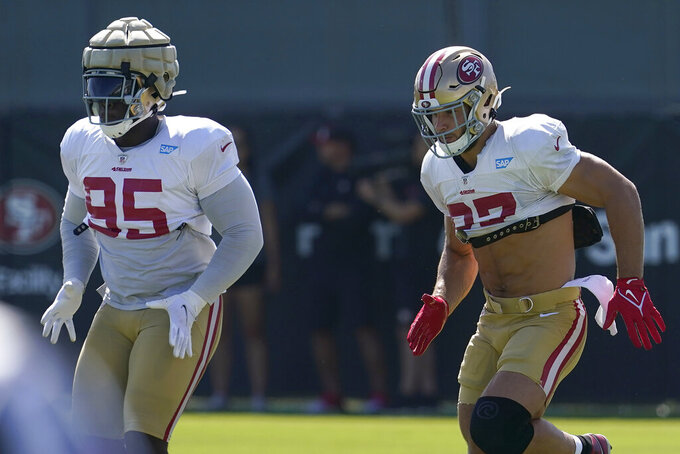 The first-year play-caller has his two most dangerous edge rushers back on the field, with Nick Bosa taking part in team drills this week for the first time this summer and Dee Ford ramping up his practice time.

Their return only adds more depth to the strength of the Niners and has Ryans scheming up all sorts of possibilities with a line that also includes Samson Ebukam and Arden Key on the edge, the versatile Arik Armstead and inside players like D.J. Jones, Javon Kinlaw and Kentavius Street.

“Having all those guys available, we can do a lot of things,” Ryans said after practice Thursday. "All those guys are very talented and you have unlimited options with what you can do with all those guys. All of them are really great talents. All of them are awesome at rushing the passer. And we just want to utilize guys to their best ability. We want to be able to utilize them, utilize their strengths, to help us win games.”

The Niners rode their defensive line to a Super Bowl appearance in the 2019 season with Bosa winning the Defensive Rookie of the Year honors, alongside big seasons from Armstead and Ford.

That was missing last season when Ford played only one game because of a back injury and Bosa went down in Week 2 with a season-ending knee injury.

But the 49ers are counting to a return to that 2019 formula to get back to the postseason this year after an injury-plagued 6-10 season in 2020.

“We’ve seen just the penetration, the get-off, the disruption up front,” All-Pro linebacker Fred Warner said. “Our defense, it all starts with them. When they’re getting off and they’re disrupting it makes it easy for guys like me, everybody in the back end to do their jobs.”

The key to the defense is Bosa, who immediately emerged as one of the league's top pass rushers as a rookie in 2019. Bosa had nine sacks and ranked in the top 10 in the league in pressures, according to Pro Football Focus.

He was dominant in the Super Bowl with 12 pressures, but the Niners ended up falling short in the fourth quarter against Patrick Mahomes and the Chiefs.

The Niners are now hoping to get Bosa back to that form as quickly as possible this season.

“The biggest thing always coming off of an injury, is just the mental hurdle of taking a hit and hitting the ground and getting up and dusting yourself off and understanding that, ‘Oh, everything is still intact. I’m still OK.' It’s back to football,” Ryans said. “I think he got a little bit of that yesterday with his first day back and again today. So, I see him just continuing to progress. But physically, I think he’s fine. It’ll just be the mental hurdle of getting over it.”

The return of Bosa and Ford to the practice field has had one negative effect on the 49ers, making it much more difficult for the offense to run its plays.

Bosa got to Jimmy Garoppolo for a sack on his first play of team drills this week, setting the defensive tone.

“It’s a very conflicting feeling because you’re excited and it’s also making your life miserable,” offensive coordinator Mike McDaniel said. “You have to keep the common goal in mind where, ‘Hey, good defense is great for us,’ but as coaches you’re trying in the practice to do well. But really when you sit back in the meeting room and you’re watching the players play, if it’s a really good player beating you, at least you feel better about that.”

NOTES: CB Jason Verrett sat out practice for a second straight day. He watched from the sideline and the team didn't disclose whether he had an injury. ... T Jaylon Moore also missed practice and LB Dre Greenlaw left early.