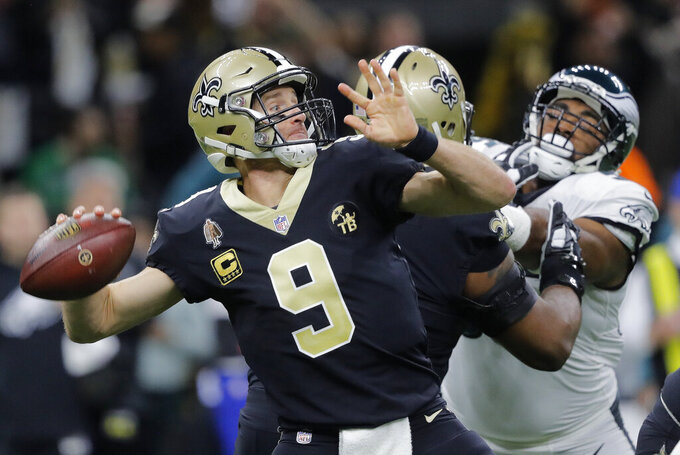 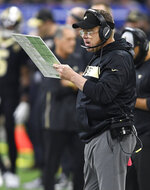 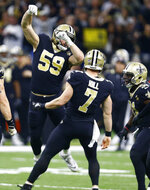 After all, Payton's Saints won a Super Bowl with the help of a surprise onside kick nine years ago, and now New Orleans is one home victory away from its first Super Bowl since then — thanks to a pair of aggressive and pivotal fourth-down play calls when the Saints were trying to come back from a two-touchdown deficit.

"We needed to shift momentum and we were able to, fortunately, and take advantage of it," said Payton, who's bound to carry that approach into the NFC title game against the Los Angeles Rams next weekend.

Facing fourth-and-short on their own 30, Payton called for a fake punt on which third-string quarterback and special teams virtuoso Taysom Hill took a direct snap as the up back.

So when the Saints faced another fourth down on the Eagles 2 later that same drive, it only seemed fitting that they dialed up a touchdown pass from Drew Brees to rookie receiver Keith Kirkwood instead of settling for a field goal.

That marked the beginning of 20 unanswered points scored by New Orleans in a 20-14 triumph in the divisional round of the NFC playoffs on Sunday.

"It's that play-to-win mentality," Brees said. "I've been with Sean long enough now to say that he's always been like that. From '06 until now, I think it's something that he knows the offense and the team feeds off of.

Payton's gambles often occur with Hill on the field, perhaps because they seem to think alike. Hill had the option to check out of the fake and let the snap sail to punter Thomas Morstead if the defensive alignment looked unfavorable. But Hill was in no mind to wait for a better opportunity. He had seemingly nowhere to go when he got the ball, and powered through anyway.

Eagles coach Doug Pederson said the Saints' risk-reward propositions had less to do with the element of surprise than simply New Orleans ability to call a good play situationally and execute.

"You kind of expect it in that situation," Pederson said. "You've just got to be prepared for that. We had our defense stay on the field. It was a great play by them."

Some other story lines surrounding the Saints' first divisional round playoff victory since their last Super Bowl title in the 2009-10 season:

LOST LEADER: The Saints stopped short of confirming that top defensive tackle Sheldon Rankins would miss the rest of the postseason with a low leg injury in the area of his Achilles, but when he punched the turf before being carted off the field, it looked serious. Afterward, Payton and players insinuated that Rankins' injury was season-ending.

"It's gut wrenching," Payton said. "He's played so well for us."

Rankins was a first-round draft choice in 2016 and his eight sacks this season ranked second on the team .

"To see him go down really hurt," fellow Saints defensive lineman Tyeler Davison said. "But I think it's going to give us some fuel as well to play for him and pull this thing out for him."

ALSHON'S ABBERATION: Normally reliable Eagles receiver Alshon Jeffery might have been the least likely candidate to have an accurate Nick Foles pass bounce off his hands and into the waiting arms of cornerback Marshon Lattimore in the final minutes, sealing the result right when Philadelphia was threatening to take a lead in the final minutes.

Jeffery dropped to the turf, face down, after the turnover, but the Eagles tried to console him. Before that fateful play, Jeffery had five catches for a team-high 63 yards.

"He's so down, but for me it's about staying positive," Pederson said. "He's made many, many big catches for us throughout the season ... I told him to keep his head up and don't let one play define him."

GROUND GAINS: The Saints outgained the Eagles 137-49 on the ground, with the elusive Alvin Kamara rushing for 71 yards, including a 12-yard, first-down run that let the Saints run out the clock. The hard-charging Mark Ingram added 53 yards. The running back tandem also combined for six catches for 44 yards.

WORN DOWN: If it wasn't tough enough for the Eagles to have three defensive starters — end Michael Bennett, tackle Fletcher Cox and cornerback Rasul Douglas — leave the game intermittently with minor injuries, Philadelphia's defense also spent far more time on the field than the Eagles would have liked. During the last three quarters, the Saints possessed the ball for more than 32 minutes and had one 92-yard drive that took 18 plays — or more than 20 plays when counting plays wiped out by penalties.

Brees pointed to that possession as "the turning point in the game."