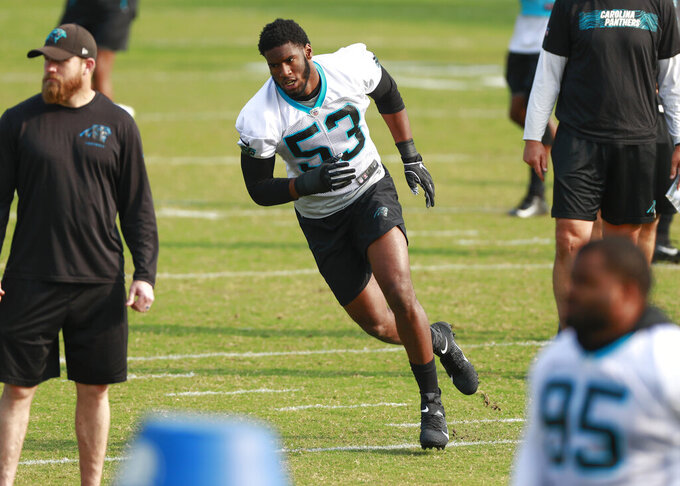 That's why Rivera is mixing in a three-man defensive front — along with a few other surprises — to go along with the base 4-3 defensive scheme the Panthers have used the last eight seasons.

"The biggest thing is that we are playing so many multiple style offenses that you just can't line up and let them attack you," said Rivera, who previously spent six seasons as a defensive coordinator with the Chicago Bears and San Diego Chargers.

That's one reason Carolina drafted Brian Burns in the first round and Christian Miller in the fourth and signed free agent Bruce Irvin, speed edge rushers who have the flexibility to drop into coverage.

The Panthers have regularly been a top 10 defense, which led to them losing defensive coordinators Sean McDermott and Steve Wilks to head coaching jobs elsewhere. Last year Carolina promoted Eric Washington as its third defensive coordinator in three seasons, but when things began to fall apart on that side of the ball Rivera stepped in to assume play-calling duties.

"In the middle of the year I started doing some different things, and I saw that every time we did some of those things positive things happened," Rivera said.

That included disguising blitzes, dropping defensive linemen into coverage and mixing up defensive fronts, among other tweaks.

The problem was the Panthers didn't have the personnel to do all of the things Rivera wanted to do, which is why general manager Marty Hurney sought out adding versatile edge rushers.

Burns, in particular, is viewed as an integral part of the team's future in this new more diverse defensive scheme.

"It makes the defense more versatile and I come from a school that did it all of the time," said Burns, who played at Florida State. "We played a 4-3, a 3-4 and a whole bunch of other packages, so I'm used to rushing the passer and dropping" into coverage.

He's also familiar with the lingo involved, which should allow him to play more freely and without overthinking things.

"Just being able to do both, no offense can really scheme me or know when I am coming at any particularly play," Burns said. "I can disguise as if I'm dropping and really come off the edge and that can free up me or other people."

When the Panthers go to a 3-4 front look for two-time Pro Bowl defensive tackle Kawann Short to slide out to defensive end.

The Panthers are hoping to land free agent defensive tackle Gerald McCoy to play inside alongside Short in their base four-man front. McCoy was cut by Tampa Bay in a salary cap move last month and is deciding between Baltimore, Cleveland and Carolina.

The Panthers visited with McCoy last week and Rivera said the meeting went very well. He thinks the Panthers have a "good chance" of signing him, but added that other teams probably feel the same way.

"He's a guy we would love to have here to be a part of what we're doing," Rivera said. "He's going through the process so we are waiting to see what the outcome is going to be."

The Panthers are still in the early stages of installing their new defensive looks, but Rivera has been pleased by the team's retention.

Now, he said, it's a matter of time to see how much of what the team is installing can be effectively used this season.

"It's neat to see the things you are capable of doing, but we won't know (how much) until we get into the preseason or regular season," Rivera said.

NOTES: Cam Newton did not throw a football during Monday's practice, which was open to the media. However, Rivera said Newton did throw some last week during closed practice sessions. Those are the QB's first throws since undergoing arthroscopic surgery in January in his right shoulder. He is expected to be ready to practice when training camp arrives.