Rodgers: If LaFleur wants me to play Thursday, I'll play 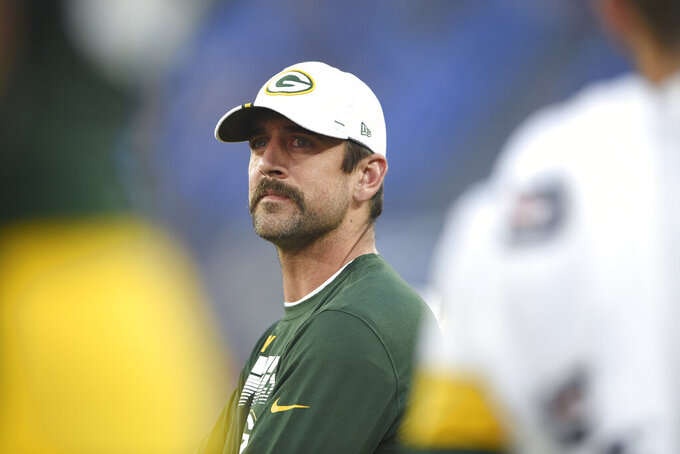 GREEN BAY, Wis. (AP) — Aaron Rodgers practiced on Monday after sitting out the Packers' second preseason game in Baltimore and being sidelined during practice Sunday with back tightness.

But the verdict is still out on whether the two-time MVP will make his preseason debut Thursday night against the Raiders in Canada.

Green Bay general manager Brian Gutekunst said the plan is for Rodgers to play. Coach Matt LaFleur said he's still undecided, and Rodgers said after practice that nothing he'll see against Oakland in Winnipeg will be better or more valuable than what he sees every day against his teammates on the defensive side.

"The practices are so much more important than the preseason," he said. "The looks that we see on a day like today are invaluable reps. It's an attacking defense, it's different fronts, it's different pressures. Oakland does some different things over the last couple preseasons that stress you at times protection-wise, so it's not as vanilla as you might see in the preseason.

"But the best reps I'm going to see all summer are in practice. If (coach) Matt (LaFleur) wants us to play, we'll play and go out and compete. If not, I feel pretty good about where we're at."

LaFleur, despite having yet to see Rodgers against live competition, said he has all the confidence in the world that the 15-year veteran will be ready when Green Bay opens the season Sept. 5 at Chicago.

"I don't think it's going to make or break us one way or the other," he said. "... I'm not overly concerned either way whether he plays or not."

Gutekunst said Monday before Rodgers took the field that he would like to see the seven-time Pro Bowler "get some of that rust off" before the Packers go into Soldier Field.

"We'd love to have him out there (on Thursday)," Gutekunst said. "But again, I think he got a lot of practice reps against Houston. I know he wasn't a fan of them, but those two days versus Houston I think were important, to get out there in that environment. So, like I said, I think the plan is to get him out there Thursday night."

LaFleur said he and his staff are still deciding how much the first team will play, but he said he has a pretty good idea of what he's going to do.

Rodgers was outspoken about his displeasure with the two joint practices with Texans before the teams faced off in their preseason opener. Rodgers, who watched the game from sideline while listening to the offensive communications on a headset, voiced similar displeasure with preseason games on Monday.

"This is not going to be a growing process from a play-caller-to-quarterback standpoint," he said. "It is what it is. The preseason, you don't carry those wins over to the regular season.

"I do find it interesting that some teams get a pass this time of year. The Rams don't play anybody and not many people talk about that fact. Now, the counter would be, 'Well, this is a new system.' I get it, but we've spent a number of practices from May and June and training camp in July and now in August running this stuff, running unscripted periods, where he has to call the play in.

Thursday will be the third time the Packers have played a preseason game outside the United States. Green Bay defeated the Bills 35-3 in Toronto on Aug. 16, 1997 and beat Kansas City 27-24 in overtime in Tokyo on Aug. 2, 1998.

Notes: LaFleur said TE Jimmy Graham will not require surgery on his injured (unspecified) finger and will be "all right." Graham, who did not practice Monday, left practice early Sunday after suffering the injury during a live team drill. Graham dealt with a broken thumb for much of the last two months of last season. ... WR Trevor Davis and QB Tim Boyle connected on a 40-yard gain against double coverage on Monday. Davis, who is also a kick return specialist, returned to practice Sunday after dealing with a neck stinger he suffered during joint practice with the Texans. "I'm just excited to get him back and to see what he can do on Thursday," LaFleur said of Davis.