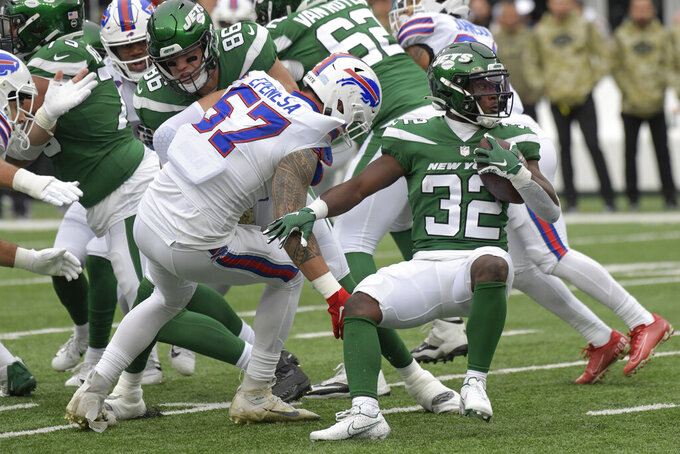 FLORHAM PARK, N.J. (AP) — Michael Carter has the swagger of a veteran. And it's not about cockiness for the New York Jets rookie running back.

It's all about supreme self-confidence.

So when Carter was asked if he still felt a bit like a rookie making his way through nine NFL games, his answer was hardly a surprise.

“I never really felt like a rookie. Ever. They drafted me to play. There's no redshirting in the NFL.”

Carter, a fourth-round pick out of North Carolina, leads the Jets with 367 yards rushing and four touchdowns. He's also difficult to tackle, rarely going down on a first hit.

“It’s not because he’s Jerome Bettis, people bouncing off,” offensive coordinator Mike LaFleur said. “He’s just a slippery dude with great contact balance and a will and a want to.”

“He’s a guy, and I’m sure as you guys have gotten to know him, he’s a dude you root for,” LaFleur said. “And it’s cool to watch the production he’s having. I think there’s a lot of good days ahead for him.”

And Carter isn't the only Jets rookie who's made an impact.

Zach Wilson remains the focus, of course, and is still considered a potential franchise quarterback. The No. 2 overall pick will miss his fourth straight game while recovering from a sprained knee ligament, but there’s optimism he could return next week.

Meanwhile, a few other rookies on offense are providing some hope for the future while the Jets have struggled to a 2-7 start.

Vera-Tucker was taken 12 spots after Wilson when general manager Joe Douglas traded up to get him. And he has settled in as arguably New York's best offensive lineman.

“When (Douglas) said he was going up to get a guard after I didn’t know Alijah that well, I was like, ‘A guard?’" LaFleur said. “And now I get exactly why he did it. Because he was spot on with it.”

That's even after the former USC star missed the entire preseason with a pectoral injury and then had an up-and-down start to the regular season.

“He's probably as solid a rookie I've ever been around on the O-line, with all the things they have to do,” offensive line coach John Benton said.

Vera-Tucker's decision-making was a bit off early on, but Benton said “he seems to have mastered that.” The young lineman has been dealing with turf toe recently and the Jets have been limited his snaps in practice, but he hasn't been hindered in games.

He has graded out well with the coaches, who keep track of missed assignments during games — and Vera-Tucker went four weeks without one after averaging three a game early.

“That kind of jump,” Benton said, “it's pretty impressive.”

Moore is also beginning to break out with 16 catches for 195 yards and three touchdowns in his last three games, establishing himself as a playmaker — whether it's Wilson, Mike White, Josh Johnson or Joe Flacco at quarterback.

"I'm getting more comfortable and more opportunities,” Moore said. “You can’t look at the game no more like I'm a rookie. You’ve got to go out there and you've got to play. ... It's time to get going.”

It took Moore a little while to do that after a quadriceps injury slowed him during what had been a spectacular training camp. A concussion in Week 4 also sidelined him. But he now ranks fourth on the team with 25 receptions.

Moore thinks he “graduated” from feeling like a rookie last month against New England, when he had one catch for 13 yards but had six passes thrown his way. He has been targeted at least six times in each of the three games since.

“The only way you get to showcase it is based off opportunity,” Moore said. “Now more opportunities have started coming, in my eyes. I guess the more that come, the more I get to show.”

He, Carter and Vera-Tucker are impressing their teammates in the process.

“Those young dudes come out here not only on game days ready, but each and every practice, they approach it like professionals,” wide receiver Corey Davis said. “It’s no coincidence these guys are out there making plays and helping us out. That’s definitely encouraging.”

NOTES: Wilson is listed as doubtful, while Vera-Tucker and DT Nathan Shepherd (knee) are questionable but expected to play Sunday against Miami. ... WR Denzel Mims remains in the COVID-19 protocol. He has tested negative once for the coronavirus, but coach Robert Saleh said it's doubtful he'll be activated in time to play. ... Saleh said OL Cameron Clark, who suffered a spinal cord injury in training camp, “has a little road to travel, but he’s coming along.” Saleh declined to discuss Clark’s football future, saying he didn’t want to speak for the player.