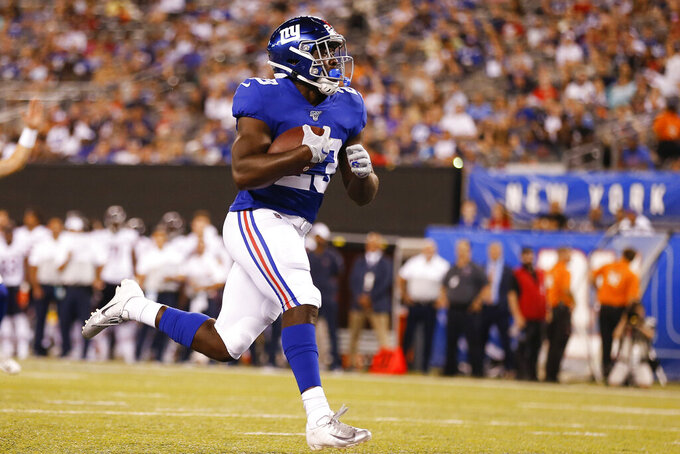 FILE - In this Aug. 16, 2019, file photo, New York Giants running back Jon Hilliman (23) scores a touchdown against the Chicago Bears during the fourth quarter of a preseason NFL football game, in East Rutherford, N.J. When Hilliman was growing up in New Jersey, he always dreamed of becoming a running back for the New York Giants. The former Boston College and Rutgers product out of St. Peter’s Prep in Jersey City signed a free agent contract with the Giants last May and has a shot at fulfilling his dream this season. (AP Photo/Adam Hunger, File)

EAST RUTHERFORD, N.J. (AP) — When Jon Hilliman was growing up in New Jersey, he dreamed of becoming a running back for the New York Giants.

Hilliman even cut a day of high school to attend the Giants' parade and festivities after they defeated the New England Patriots in the Super Bowl in February 2012.

The 23-year-old rookie has a shot at fulfilling his dream this season.

The former Boston College and Rutgers product out of St. Peter's Prep in Jersey City signed a free agent contract with the Giants last May and has been competing with Wayne Gallman, Rod Smith, Paul Perkins and Eli Penny for a spot on the 53-man roster.

While Hilliman's chances of making the roster are slim, he's been pushing for a spot, with the final cutdown at the end of the month.

"It's been a learning experience for me," said Hilliman, who will get another chance to show his talents when the Giants face the Bengals in Cincinnati on Thursday night. "I know that there's still work to be done. I'm going to go hard. I can only control what I can control and how hard I play."

In the Giants' 32-13 victory over Chicago Friday night, Hilliman was the team's leading rusher, gaining 56 yards on 16 carries. He scored a touchdown on a 10-yard run up the middle.

In his excitement, Hilliman somehow tossed the football aside. Luckily, the Giants' All-Pro running back Saquon Barkley retrieved the ball for him.

On the first day of practice after the game, Barkley walked by Hilliman and exclaimed, "This is the man right here."

"Any time you have a superstar with you, it gives added attention to the running back room," Hilliman said. "Saquon's out there and he helps to show everyone how talented we are as a group. I'm excited to compete with him and the others. It can only help me to get better."

Hilliman, who grew up in Plainfield, has no expectations about making the team. He just wants to keep working hard.

There has been adversity, too. In the preseason opener against the Jets, Hilliman caught two passes for 16 yards. On the second one, he suffered a concussion.

"I really didn't get down on myself," Hilliman said of the injury. "I knew it was sort of a test for me, like a curveball."

Hilliman spent three days on the sidelines in the concussion protocol.

"I didn't rush it," Hilliman said. "I did what the doctors said. I felt fine. I didn't have any symptoms in the light."

When he was cleared to play against the Bears, he made the most of it.

"It was kind of surreal, getting a chance to play in front of my friends and family," Hilliman said. "I was wearing the colors of the team I grew up loving. I always had such respect for this organization. That hit me as I was running out of the tunnel. I knew that this is where I wanted to be. I just wanted to put my best foot forward."

If the Giants release Hilliman, he's prepared to move on.

"I will just go about my business," he said. "I want everyone to have a job, but I know that's not realistic. My main focus is to make this club and I'm going to do my best to make that happen."