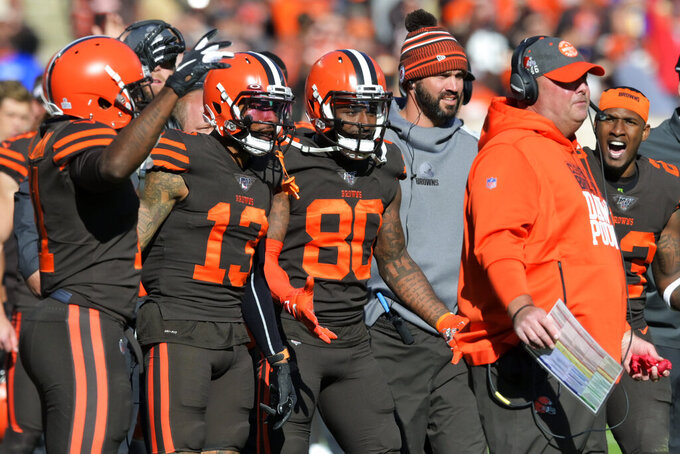 FILE - In this Sunday, Oct. 13, 2019, file photo, Cleveland Browns players encourage head coach Freddie Kitchens to throw a challenge flag during an NFL football game against the Seattle Seahawks, in Cleveland. Being a rookie head coach in the NFL is challenging enough, and also calling plays for the offense only increases the difficulty. Kitchens is finding himself criticized and second-guessed for trying to do too much halfway through his first season. (AP Photo/David Richard, File)

Randall's return is significant because the struggling Browns (2-6) are thin at the position after releasing Jermaine Whitehead. The team cut Whitehead on Monday after he posted profane, threatening messages on Twitter following Cleveland's loss in Denver on Sunday.

Randall got hurt in the Browns' loss to Seattle on Oct. 13.

Starting defensive end Olivier Vernon (knee) and tight ends Pharaoh Brown (concussion) and Ricky Seals-Jones (knee) were missing from Wednesday's practice. Coach Freddie Kitchens was vague on their status other than saying they were considered day to day as the Browns prepare to host the Buffalo Bills (6-2) this week.

Left tackle Greg Robinson practiced after suffering an ankle injury against the Broncos. He got hurt, returned to the game and left again.