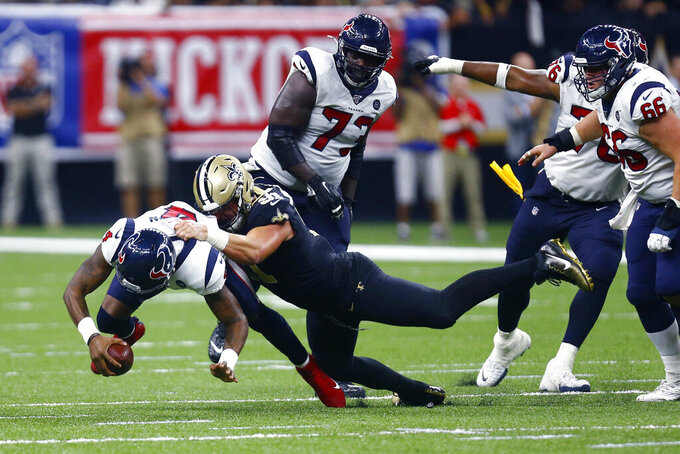 NEW ORLEANS (AP) — Saints coach Sean Payton offered a compliment — albeit a backhanded one — to his club's defense for its effort to protect a six-point lead in the final 50 seconds of a thrilling season opener against Houston.

"The only upside is we let them score quick enough to where we had time to come back and kick a field goal," Payton said. "That's trying to look at the bright side of things, I guess, but that has to change."

While the Saints have the look of a contender for a third straight year, their two-minute defense has been a source of discontent in New Orleans for more than a season. It was exposed in each of their past two playoff losses and nearly cost them again on Monday night.

Down 27-21 on their 25-yard line with 50 seconds remaining, the Texans drove 75 yards in just 13 seconds on two Deshaun Watson passes — a 38-yarder to DeAndre Hopkins and a 37-yard scoring strike to Kenny Stills. Suddenly, New Orleans trailed 28-27.

"That wasn't really good football, you know, to give up a big play against a guy (Hopkins) that we should have safety help, over-the-top coverage on, and then the very next play to give up a touchdown pass," Payton said.

Fortunately for New Orleans, the 37 seconds still remaining after Houston had surged in front was just enough time for Drew Brees to complete three passes for 35 yards to set up Wil Lutz' game-winning field goal from 58 yards as time expired.

It hasn't always ended well when the Saints have lost late leads. They lost a divisional-round playoff game to end their 2017 season when they gave up a 61-yard touchdown , known as the "Minneapolis Miracle", as time expired.

In last season's NFC title game, the Saints led 23-20 with 1:41 left in regulation, but could not keep the Rams out of tying field-goal range. Los Angeles won in overtime.

During the 2018 regular season, New Orleans won twice despite defensive collapses in the final minutes.

Against Cleveland , the Saints were beaten over the top on a 46-yard scoring strike to Antonio Callaway with 1:16 left in regulation. But the Browns missed the go-ahead extra point and Brees drove New Orleans into range for a game-winning kick by Lutz.

At Baltimore, the Saints allowed the Ravens to drive 81 yards in six plays and score what looked like a game-tying TD on a 14-yard pass from Joe Flacco to John Brown with 24 seconds left in regulation. But an extremely rare missed extra point by Baltimore kicker Justin Tucker allowed New Orleans to escape with a 24-23 win .

The Saints have a little more margin for error, for now. They're already alone in first place in the NFC South because Atlanta, Carolina and Tampa Bay all lost last weekend.

The offensive line, now centered by second-round draft choice Erik McCoy after the retirement of Pro Bowler Max Unger, allowed only one sack of Brees, and that was on a linebacker blitz. Right tackle Ryan Ramczyk neutralized J.J. Watt, the 2018 AFC sack leader, who did not have a tackle or any other meaningful defensive statistic. Brees' comfort with his pass blocking helped him complete 32 of 43 passes for 370 yards.

The Saints' defensive backfield too often lost track of receivers, particularly on Houston's final drive, but also on two earlier touchdown drives. At one point, Houston had a string of six straight third-down conversions.

Last season, the Saints gave up 268.9 yards passing per game, which ranked 29th in the NFL. Top cornerback Marshon Lattimore spent much of Monday night's game covering Hopkins, who caught eight passes for 111 yards and two TDs, not to mention a 38-yarder down the left sideline on Houston's last drive.

"He made too many plays ... for one of our goals was to be to eliminate him or do not let him beat you," Payton said. "That kind of thing, we need to clean up as players and as coaches."

Reserve defensive end Trey Hendrickson, who had eight tackles and no sacks last season, sacked Watson twice. His second sack, in which he beat left tackle Laremy Tunsil around the outside, stalled a fourth-quarter Houston drive near midfield.

Defensive end Marcus Davenport is under increasing pressure to produce in his second season after the Saints traded up to take him in the first round in 2018. Davenport was credited with two tackles against Houston, but was not in on any of the Saints' six sacks and did not have any tackles for loss.

The Saints did not announce any injuries, but safety Marcus Williams, who intercepted Watson in the third quarter, stayed down on one knee after a play in the fourth quarter. He came to the sideline after speaking with a trainer.

The early schedule remains difficult, starting Sunday against the Rams in Los Angeles. The Saints plan to remain on the West Coast throughout the following week before playing at Seattle, then return home to meet Dallas.