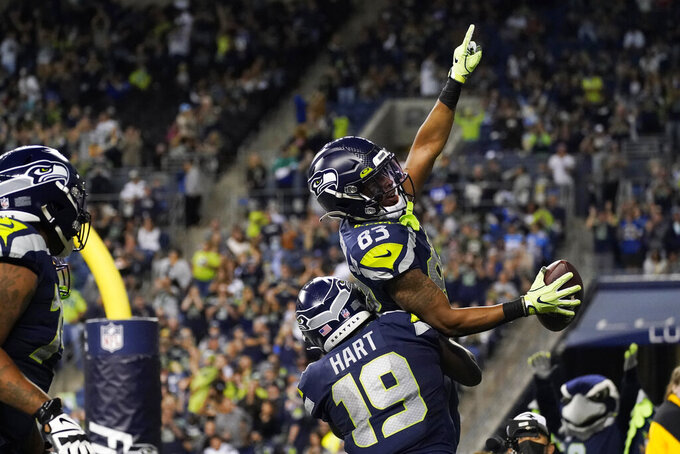 Seattle Seahawks wide receiver Darece Roberson Jr (83) celebrates with wide receiver Penny Hart (19) after Roberson caught a pass for a touchdown against the Los Angeles Chargers during the second half of an NFL football preseason game Saturday, Aug. 28, 2021, in Seattle. (AP Photo/Elaine Thompson)

SEATTLE (AP) — With most of Seattle's stars serving as spectators for the preseason, Pete Carroll finally saw the Seahawks' depth perform in dominating fashion.

On the other side, the Los Angeles Chargers didn't get the final look new coach Brandon Staley was hoping before making decisions on their roster questions.

Marquise Blair returned a fumble 17 yards for a touchdown, Alex Collins made a strong bid to be included in Seattle’s running back rotation, and the Seahawks closed out the preseason Saturday night with a 27-0 win over the Chargers.

Both teams played primarily their backups, but it was Seattle’s groups of reserves that made the stronger statement after getting blown out in its first two preseason games.

“After the first couple games, kind of forgot about how we can play around here. And the guys really did a nice job tonight,” Carroll said. “We didn’t change the approach and who played and all that, with a few exceptions. It was just a really nice effort.”

Blair snatched the fumble out of midair after Cody Barton sacked Chargers quarterback Chase Daniel and walked into the end zone on the opening possession for Seattle’s first touchdown of the preseason.

Collins added a 5-yard touchdown run later in the first quarter. Collins finished with 37 yards on 10 carries and had seven receptions for 52 yards. While Seattle seems set with Chris Carson and Rashaad Penny as its primary running backs, depth has been a concern in recent seasons due to injuries for the pair and keeping Collins around seems wise.

“It’s definitely a good feeling just going out there and making plays like that and getting everybody fired up on the sideline,” Collins said.

Sean Mannion added a 2-yard touchdown pass to Darece Roberson Jr. in the fourth quarter for Seattle. Mannion went 13 of 15 passing and seems a likely practice squad addition for Seattle.

While most of the Chargers positions are set, both Daniel and Easton Stick were making their final cases to be the backup quarterback behind Justin Herbert. Daniel played just the first half, going 9 of 12 for 70 yards and was sacked twice.

Stick played sparingly in the first half but took all the snaps in the second half. He was 10 of 17 for 76 yards and was sacked three times. Both Daniel and Stick said they are prepared for however the Chargers choose to approach the role going into the season.

“We all three get along really well. They got some tough decisions to make and the next couple days and we’re ready for anything,” Daniel said. “Three. Two. Whatever it is we both put our best foot forward and whatever comes of it comes of it.”

But it was a largely uninspired effort from the Chargers on the offensive side. Los Angeles crossed midfield just two times and backup kicker Tristan Vizcaino missed a 47-yard field goal attempt the only time the Chargers moved inside the Seattle 30.

“I was concerned tonight about how we played. I thought we lost physically upfront and I didn’t feel like we gave ourselves a good enough chance for our skill players and our quarterbacks to operate,” Chargers coach Brandon Staley said. “That’s why I was proud of our quarterbacks. I felt like they did a really good job all night giving us a chance to operate. But we got to show more toughness, more resilience, more physicality upfront.”

Both teams sat the vast majority of their starters choosing not to risk injury two weeks before the start of the regular season. None of the Chargers projected starters saw the field with Herbert, Keenan Allen, Mike Williams, Derwin James and plenty more key pieces spectating.

A handful of Seattle starters did get a little playing time. Expected starting center Kyle Fuller, left guard Damien Lewis, tight end Gerald Everett and No. 3 wide receiver Dee Eskridge saw some action in the first quarter for Seattle’s offense. Eskridge had one rush for nine yards and a 19-yard reception in the first preseason action for the rookie. The Seahawks defense had a few more possible starters and contributors playing, especially in the secondary, where the starting cornerback spots still appear unsettled. Cornerback D.J. Reed did not play, but Tre Flowers, Damarious Randall and Ahkello Witherspoon all saw time.

Second-year linebacker Darrell Taylor also got extended snaps for Seattle and showed the burst the Seahawks hope he can provide off the edge as a pass rusher with 1½ sacks in the first half.

“It felt really good. I can't wait until it's the real thing,” Taylor said.

The Chargers were without special teams coordinator Derius Swinton II, who remained in California pending the birth of his child. Assistant special team coach Mayur Chaudhari served in Swinton’s absence.

Seahawks: Seattle opens the regular season at Indianapolis on Sept. 12.