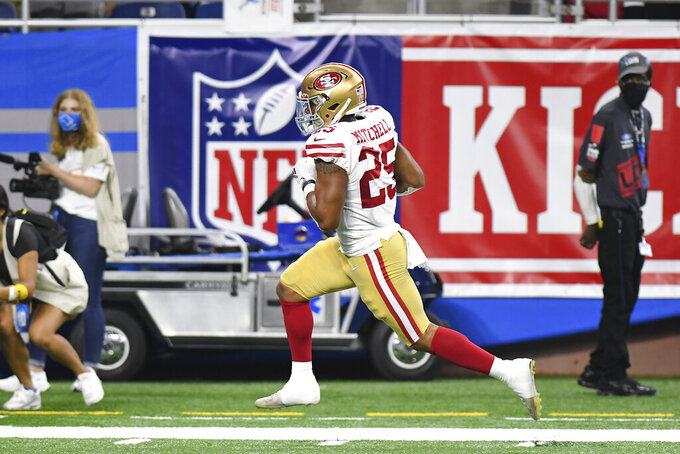 SANTA CLARA, Calif. (AP) — The injuries at running back for the San Francisco 49ers keep piling up so much that coach Kyle Shanahan said the team could consider bringing back Frank Gore for another stint.

After losing starter Raheem Mostert to a season-ending knee injury in the season opener, San Francisco lost Jamycal Hasty to an ankle injury in Week 2 and Shanahan is uncertain whether rookies Trey Sermon and Elijah Mitchell will be healthy enough to play this week.

That led to questions about whether the 38-year-old Gore could be an option. Gore is the franchise’s career leading rusher with 11,073 yards in 10 seasons in San Francisco. He left the Niners after the 2014 season and is currently not with a team but ranks third all time with 16,000 yards rushing.

“We’ve never fully ruled that out,” Shanahan said. “I don’t know exactly where he is right now, but I’ve got a number of people in here who have a relationship with him. If that time ever comes that we need to do that and he wants to do it then I would never rule it out.”

Mitchell sat out practice Wednesday with a shoulder injury, but still has a chance to play this week. Sermon is working his way back from a concussion and took part in individual drills, but hasn't yet been cleared to play.

That makes game-planning for Sunday's matchup against Green Bay difficult not knowing who will be available.

“It alters a lot because you have to make sure you give different options in every situation," Shanahan said. "Especially when there’s a lot of unknown. There’s a chance we might be only be down one compared to last week. There’s a chance there might be a whole new group, which would be down to our sixth on the year. So, you have to plan for everything and that’s what you do.”

Patrick is a bigger back at 234 pounds, but has never appeared in an NFL game. Thompson played for Shanahan in 2013 in Washington and has 1,214 yards rushing and 1,918 yards receiving in eight seasons.