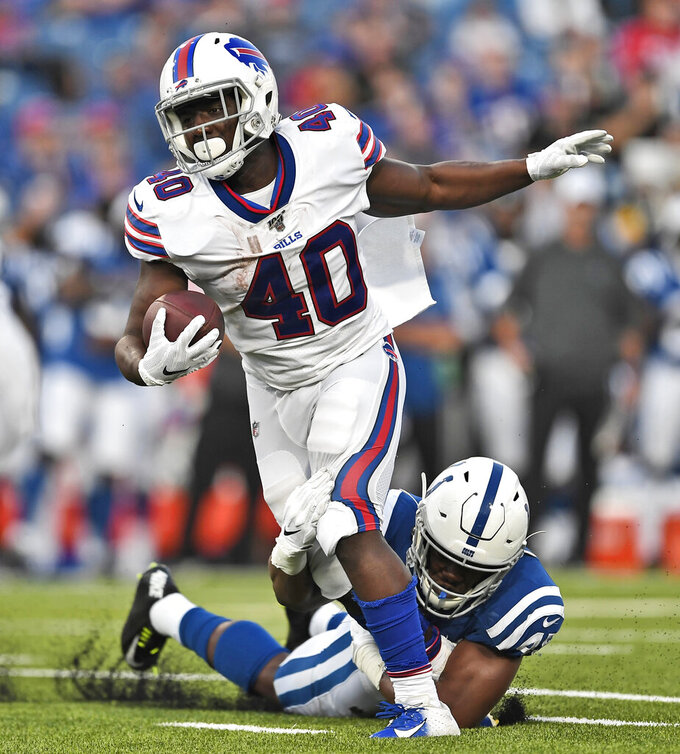 ORCHARD PARK, N.Y. (AP) — Running back LeSean McCoy might still be, as he puts it, "The Guy" in a Buffalo Bills backfield that also features the NFL's active leading rusher, Frank Gore.

With McCoy resting and Gore limited to playing two series, Singletary got the Bills off to a running start in their preseason-opening 24-16 win over the Indianapolis Colts.

Being fed the ball seven times on Buffalo's fourth drive, the 5-foot-7 Singletary displayed the elusive qualities that led to the Bills drafting him in the third round. He accounted for 16 yards rushing and 21 receiving as part of a 46-yard drive that ended with Matt Barkley hitting Cam Phillips for an 8-yard touchdown pass to open the scoring 5½ minutes into the second quarter.

Singletary was taken aback when informed of Gore's comments.

Singletary scored 66 touchdowns during his three years at Florida Atlantic, which led to Bills general manager Brandon Beane referring to him as "the funnest guy I've watched all year."

Singletary was fearless in running up the middle, at one point having defensive end Kemoko Turay whiff as he sped past him. And he displayed patience in following his blocks, as happened on a 10-yarder to convert a third-and-10 two plays before Phillips scored.

"He's been doing it all camp. So just to see it translate into the game situation is a good thing," Nsekhe said.

The Colts struggled on offense while sitting out numerous starters, including quarterback Andrew Luck, who is nursing a strained left calf.

Backup Jacoby Brissett finished 2 of 5 for 21 yards over three series, with both completions to offseason free-agent addition Devin Funchess.

Indianapolis combined for two first downs and 44 yards over its first seven series. Backup Phillip Walker then ended the half by putting together a five-play 41-yard drive, capped by Cole Hedlund hitting a 42-yard field goal to cut Buffalo's lead to 14-3.

Coach Frank Reich placed the blame for the Colts' sputtering offense on an inability to run the ball. Indianapolis finished with 16 yards rushing in the first half, though it was missing starter Marlon Mack, who had the day off.

"Yeah, we're vanilla, but it shouldn't matter in the run game," Reich said. "We were expecting to be able to run the ball."

With his Pro Football Hall of Fame uncle Jim Kelly in the stands, Colts quarterback Chad Kelly provided the only offensive highlights upon taking over midway through the third quarter.

Kelly scored on a 33-yard scamper and also led the Colts on two drives ending with field goals.

"It was awesome to finally come home and get back on the field, like a kid in a candy shop, having fun and doing it with the guys," Kelly said.

He grew up in Buffalo, but has had a checkered college and pro career, and is seeking a second chance after signing with the Colts in May.

Running back Christian Wade, giving football a shot after growing up in England playing rugby, scored on a 65-yard run on Buffalo's first play from scrimmage after Kelly scored. It also happened to be the first time Wade took the field.

The only difficulty he had was figuring out how to celebrate.

"I had it all planned out. I was like, when I get to the end zone, I'm going to put the ball down, like in rugby, and I might even dive like in rugby," Wade said. "But I thought I might hurt myself in all these pads."

Colts backup offensive lineman Ian Silberman was released from a Buffalo-area hospital and cleared to travel home with the team after complaining of an abdominal medical issue. Silberman was transported to the hospital for precautionary reasons before the game.

Among the Indianapolis notables who did not play were TEs Eric Ebron and Jack Doyle, DE Jabaal Sheard (knee), PK Adam Vinatieri, and rookies LB Ben Banogu and WR Parris Campbell due to hamstring injuries.

Bills: hold joint practices with Panthers in South Carolina before playing at Carolina on Aug. 16.