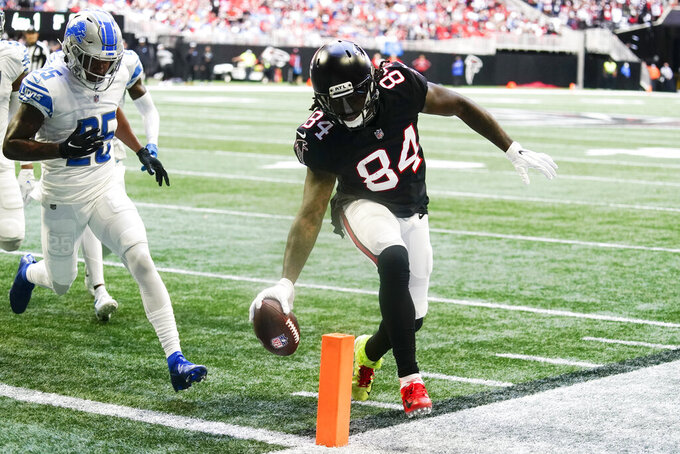 Atlanta Falcons running back Cordarrelle Patterson (84) runs into the end zone for a touchdown against the Detroit Lions during the first half of an NFL football game, Sunday, Dec. 26, 2021, in Atlanta. (AP Photo/John Bazemore)

ATLANTA (AP) — The Atlanta Falcons have made dramatic progress in close games.

The next challenge is to create more tight finishes. And wins.

The Falcons (7-10) capped their fourth consecutive losing season with Sunday's 30-20 loss to the New Orleans Saints. First-year coach Arthur Smith didn't realize his goal of taking Atlanta to its first playoff berth since 2017, but he said the Falcons' future is promising.

“We scrapped. We clawed,” Smith said. “We feel like we have a good foundation and better days are ahead.”

It seems likely the immediate future includes quarterback Matt Ryan, who will be 37 next season. Ryan said Sunday he wants to return, and his potential $48.7 million cap hit in 2022 makes it extremely difficult for the team to seriously consider any options.

Even if the Falcons draft a quarterback this year, Ryan looks like next season's starter.

Ryan's production dipped this season. Despite the added 17th game to the schedule, his streak of 10 4,000-yard seasons ended.

Ryan passed for 3,968 yards with 20 touchdowns and 12 interceptions despite throwing to a patchwork corps of wide receivers. Following the offseason trade of Julio Jones to Tennessee, Calvin Ridley left the team to address mental health issues.

“We tried to do everything we could to win football games and we did it without a lot of first-rounders out there,” Smith said. “I think that says a lot about the quarterback.”

Smith said he didn't want to “ever back ourselves into a corner” by committing to Ryan or any player for 2022. “Matt knows how we feel about him," Smith said. "... Everything is evaluated every year, and that’s the way it goes in the NFL.”

Ryan's record of durability remains impressive. After making each of 17 starts this season, he has missed only three games in 14 seasons.

The Falcons ranked last in the league with 17 sacks. It's a shockingly dismal total, even for a franchise which has had persistent problems pressuring quarterbacks.

Atlanta also ranked last with 83 quarterback hits allowed. It’s easy to blame the offensive line, but that stat also reflects the inability of wide receivers to create separation, and Ryan at times holding the ball too long.

Ryan was sacked 40 times. It is the fourth consecutive season he has been sacked 40 or more times, making his record of durability even more impressive.

One sign of progress was Atlanta's 7-2 record in one-possession games.

“Our team doesn’t quit, but we came up short,” Smith said.

It was improvement from the 4-12 finish in 2020, when the team's repeated late-game breakdowns led to the firings of coach Dan Quinn and general manager Thomas Dimitroff.

“I think Arthur talked a lot about wanting to create a culture,” Ryan said. “I think he’s done a very good job of that, creating a tough, physical football team. We’re making strides toward that."

Patterson, a four-time All-Pro selection as a return specialist, enjoyed a breakout in his first season listed as a running back. Formerly a wide receiver on offense since entering the NFL in 2013, Patterson compiled 1,600 all-purpose yards: 618 rushing, 548 receiving and 434 on kickoff returns.

He said Monday his first season as a running back did not take a physical toll, but his carries declined in the final month. After having six games with double-digit carries, he had fewer than 10 carries in the final three games. He matched his season low with only four for 11 yards on Sunday.

“You’ll have to talk to coach Art on that,” Patterson said. “I didn’t know I only had four carries. ... That’s kind of sick. It is what it is. I’m not complaining, man."

Patterson likely boosted his market value in free agency but lobbied to stay in Atlanta. He wrote on one of his cleats Sunday "Why not retire in Atlanta?”

Smith and GM Terry Fontenot face a crucial offseason. Obvious weaknesses include the pass rush, lack of protection for Ryan, and the need for more big-play punch at wide receiver and running back. Perhaps the greatest challenge will be for Fontenot to rank the team's greatest need.

The Falcons could select an edge rusher with the No. 8 overall selection in the April 28-30 NFL draft.

It is possible Ridley has played his last game in Atlanta, and the Falcons might consider trade, perhaps for a draft pick.