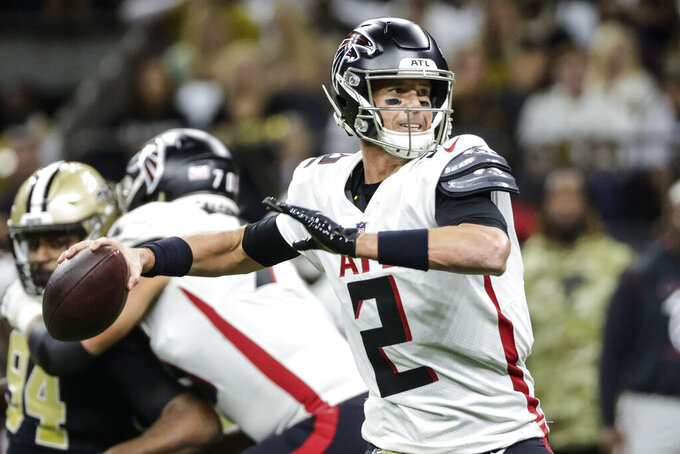 Patterson is in his first season in Atlanta, so he lacks the historical perspective to know heart-stopping wins in the first half of 2021 are the Falcons fans' preferred option to heartbreak losses of last year.

Thanks to the latest scary win, a last-second, 27-25 thriller at the New Orleans Saints on Sunday, the Falcons (4-4) already have matched their 2020 win total at the midpoint of the season. Of their four wins, three have come by no more than three points.

Smith has been successful in helping the Falcons learn how to finish games. That's a noteworthy accomplishment one year after Atlanta lost four fourth-quarter leads and made inglorious history as the NFL's first team to lose back-to-back games after holding fourth-quarter leads of at least 15 points.

There is much room for more improvement as the offense still lacks run balance and the defense needs to produce more big plays. Even so, the Falcons have won three of their last four games and have reason for hope at the season's midpoint.

“Success breeds success, and when you do it you start believing you can do it,” said quarterback Matt Ryan after Sunday's win. “I think that’s huge for a lot of our guys. We have a young football team and a lot of guys who it’s either their first or second year going through this.”

Patterson, one of the league's most surprising players, has been a revelation. The former wide receiver and four-time All-Pro return specialist has been reborn as a running back in Atlanta. He's still making a big impact catching passes, including the game-changing 64-yarder from Ryan with a minute left on Sunday.

The catch set up Younghoe Koo’s winning 29-yard field goal. Patterson's steady production as a receiver out of the backfield has helped the Falcons withstand the absence of No. 1 wide receiver Calvin Ridley, who was placed on the reserve/non-football injury list last week as he is away from the team to focus on his mental health.

Ryan, meanwhile, is playing as if determined to silence doubters who felt he was past his prime at 36. Ryan played up to his “Matty Ice” nickname after the Falcons blew a 24-6 lead against the Saints. He has completed 69.4% of his passes, matching his best accuracy since his 2016 NFL MVP season.

The Falcons rank near the bottom of the league with 80.4 yards rushing per game and 3.4 yards per carry. The team's long search for pass-rush help continues. Atlanta ranks last in the league with 11 sacks. No player has more than two. The defense has only three interceptions.

Patterson's 38 receptions and five TD catches lead the team, but rookie tight end Kyle Pitts' 546 yards receiving and 15.2 yards per catch are the best on the team. Pitts hasn't won every matchup this season, but he has been the big, athletic target the team expected to find with the No. 4 overall pick in this year's NFL draft.

Mike Davis was held to 13 yards on nine carries against New Orleans and was stopped on a fourth-down run in the second quarter. It was the latest evidence Atlanta can’t rely on its running game for a tough yard. Davis fumbled after Patterson’s big catch when Atlanta was only trying to burn the clock, but the Falcons recovered.

41 — The game-winning drive was the 41st of Ryan's career, the seventh most in NFL history. He had been tied with John Elway and Matthew Stafford at 40.

A road win over a 5-2 New Orleans team was impressive. Now the Falcons face another road test. Three of their next four games, including this week's visit to Dallas, are against teams with winning records.