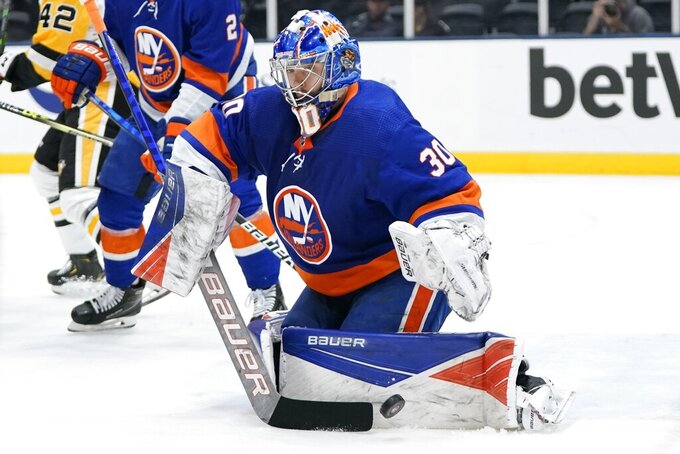 UNIONDALE, N.Y. (AP) — After two tough losses, the New York Islanders turned back to Ilya Sorokin in a game they needed to win, and the rookie goalie came through.

Sorokin stopped 29 shots, Oliver Wahlstrom and Ryan Pulock each had a goal and an assist and the Islanders beat the Pittsburgh Penguins 4-1 in Game 4 on Saturday to even the first-round series.

Sorokin, who had 39 saves in the Islanders’ 4-3 win in Game 1, was back in goal after Semyon Varlamov started Games 2 and 3 — both losses.

“Ilya’s been through a lot of stuff, everything from league championships in a very good league in the KHL,” New York coach Barry Trotz said. “He’s won it, he’s been MVP. He’s been under the spotlight a lot and been in those big moments. ... He’s not a guy that’s a pure rookie coming in the NHL or a lot of these high-pressure situations. He’s had a lot of them, just in different leagues.”

Tristan Jarry had 23 saves for Pittsburgh, and drew mocking chants of “Jar-ry! Jar-ry!” from Islanders fans.

“We just got to stay with it," Penguins coach Mike Sullivan said. "I don't think we were quite as sharp tonight. We didn't have as many looks tonight as we had in the first few games. We're going to have to work for those moving forward.”

Game 5 is Monday night in Pittsburgh, and Game 6 back at Nassau Coliseum on Wednesday.

With the teams skating 4 on 4 in the third period, Pittsburgh’s Kris Letang was whistled for interference to put the Islanders on their third power play. Just as a penalty on Scott Mayfield was expiring, Wahlstrom fired a one-timer that was stopped by Jarry, However, Pittsburgh's Teddy Blueger knocked the puck in while trying to clear the rebound, putting New York up 3-0 at 6:04.

With the Islanders still on a power play, Eberle made it 4-0 just 24 seconds later as he beat Jarry high on the glove side from the inside edge of the right circle.

“It’s a critical moment in the game,” Barzal said. “(If) they kill that off they got a lot of life. Just two huge goals to put the game away. That’s a crucial moment, big by our power play.”

Zach Aston-Reese spoiled Sorokin's shutout bid with a short-handed goal with 2:35 to go. It was his first career playoff goal.

The Islanders expect the Penguins to come out refocused back on their home ice Monday night.

“It’s a pretty veteran group over on the other side,” Barzal said. “I think whatever we did tonight, they’ve probably already forgotten about it. They’re going to be fresh for Game 5. We’ve been In a few playoff series past few years so we kind of got a feel on where our heads need to be at and where our focus is at. We’ll enjoy this one and once we leave the rink tonight it’s a tied series, three-game series.”

After a scoreless first period, the Islanders took control in the second.

Nelson's redirect in front was turned aside by Jarry 2 minutes into the second. Sorokin made a nice stop sliding to his right to deny Sidney Crosby in front 3 1/2 minutes later.

Bailey got the Islanders on the scoreboard first with his second goal of the series 8:07 into the second. Letang pushed New York's Anthony Beauvillier into Jarry, forcing the goalie back into the goal, and Bailey fired a shot past him.

Pulock made it 2-0 with 5:09 left in the middle period as he got the rebound of a shot by Wahlstrom and fired a one-timer off skate of Penguins defenseman Cody Ceci and past Jarry.

“There wasn’t much room on both sides in that first period,” Trotz said. “And in the second period I thought we started getting a little more traction. We scored the first goal which is key for us. In the last little while we haven’t led very much.”

Sorokin made a low blocker save on Kasperi Kapanen's breakaway attempt a minute into the game. Beauvillier point-blank try in front was deflected by Jarry off the pipes about 6 minutes in. Mathew Barzal fired a shot off the post from the right circle with 2 1/2 minutes left in the first period.

PLAYING WITH THE LEAD

Bailey's second-period goal gave the Islanders the lead during the game for just the third time in the series. In their Game 1 win, they led 1-0 and 3-2 but played with the lead for a combined 3:43 before the Penguins tied the score. They won in overtime on Kyle Palmieri's goal. Pittsburgh never trailed in its wins in Games 2 and 3.

Letang played his 140th career playoff game with Pittsburgh, tying Jaromir Jagr for third place on the franchise list. Crosby leads with 172, and Evgeni Malkin is second with 168.

JETS IN THE HOUSE