Spotlight on offense as defense continues to carry Patriots 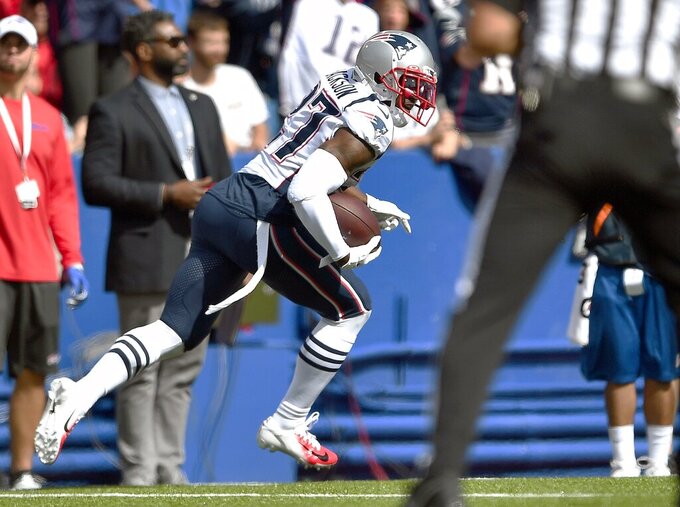 FOXBOROUGH, Mass. (AP) — Last season, offense helped the Patriots recover from a 1-2 start while their defense steadily improved throughout the year.

So far in 2019, it's been the defense that's carried New England to a 4-0 start amid injuries to the offensive line and a run game that has suffered as a result.

The Patriots scored just one offensive touchdown but got a blocked punt returned for a score by the special teams and a late interception by linebacker Jamie Collins to help secure a 16-0 win over the Bills.

Tom Brady, who finished 18 of 39 for 150 yards and had one interception, said Buffalo's defense played a factor in their problems Sunday.

"Offensively we struggled. They force a lot of teams to struggle, and if we're going to score more points, then we have to do a lot better job than we did (Sunday)," Brady said. "We didn't, so that's just the way it goes."

New England's defense gave up its first touchdown of the season but had four total interceptions and held Buffalo to 2 of 13 on third down. It also limited Bills quarterback Josh Allen — responsible to three of the INTs — to 153 yards passing before he was knocked out of the game in the fourth quarter following a helmet-to-helmet hit by Jonathan Jones.

The hit was heavily scrutinized after the game because it drew only a personal foul for unnecessary roughness and Jones wasn't also ejected from the game. NFL officiating chief Al Riveron told a pool reporter afterward the Jones wasn't ejected because the hit did not meet the league standard for disqualification.

The hit aside, cornerback Stephon Gilmore said part of the reason the defense has been so successful is because of how well the unit is preparing for its different challenges each week.

He said they were locked in on their plan to contain Allen.

"Everybody just had to do their job," Gilmore said. "We had play calls that we planned on calling and we just trusted everybody. Trusted the defensive line to get there, tried to make him make some tough throws and we were able to come out with the win."

The secondary continues to be the standout group on defense. With two interceptions by J.C. Jackson and one by Devin McCourty on Sunday, the secondary has been responsible for seven of the team's 10 picks. McCourty has four, his most since 2014.

Jackson was all over the field. He had two of the Patriots' four picks and also the blocked the punt that led to Matthew Slater returning it 11 yards for the touchdown.

Coach Bill Belichick said the special teams has been locked in throughout the season and that it all came together on that play. He said the blocked punt is a staple of their practices.

"Every week we practice it. All of the guys on the punt return team practice it because you never know which guy is going to come free," Belichick said. "You might think they're going to block it a certain way, but the guy makes a mistake. . It's something we absolutely work on every week, it was a great play by J.C., and Matt Slater was really close on another one."

"I think we're all going to look back on this game and say, 'There are some things we can improve on,'" Belichick said. "Certainly, I feel that way. We have a hard-working team. I have a lot of confidence in our team. We'll just keep working hard to do things better."

The Patriots have now won 18 straight games against a first or second-year quarterback, the longest streak in NFL history.