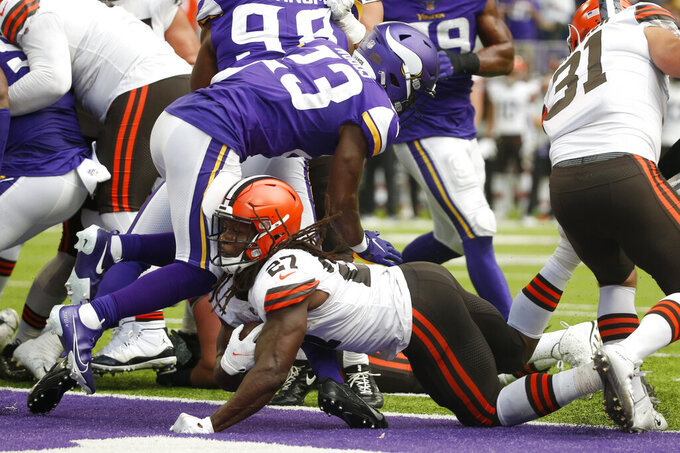 Cleveland Browns running back Kareem Hunt (27) scores on a 1-yard touchdown run ahead of Minnesota Vikings free safety Xavier Woods (23) during the first half of an NFL football game, Sunday, Oct. 3, 2021, in Minneapolis. (AP Photo/Bruce Kluckhohn)

MINNEAPOLIS (AP) — After winning the NFL's Coach of the Year award in his first season with Cleveland, Kevin Stefanski now has a victory over his old team in Minnesota to highlight the start of his second year.

The Browns are finally on the rise, behind their steady young leader on the sideline.

Myles Garrett and the defense produced another dominant performance, Nick Chubb and Kareem Hunt kept the ball moving on the ground, and the Browns beat the Vikings 14-7 on Sunday.

“That was what the game called for today. It might be completely different next week, and we have to be ready to do it to win in any which way,” said Stefanski, who spent 14 seasons as an assistant with the Vikings working his way up the staff.

Garrett was credited with one-half of Cleveland's two sacks and four hits on Kirk Cousins, Greedy Williams became the first player this season to intercept Minnesota's quarterback and the Browns (3-1) again leaned on their two-pronged rushing attack to control the ball and win an ugly game.

“It was pretty sloppy, to be honest, but we got the win and that’s all that matters,” Chubb said.

Cousins hit Justin Jefferson for a touchdown pass to cap a commanding opening drive by the Vikings (1-3), who took possession 11 more times without scoring or even trying a field goal. The furthest they came was the 26-yard line, where they had one final play to try to tie the game. Cousins threw on the run into the end zone, where the ball fell incomplete.

Chubb had 21 carries for 100 yards and Hunt ran 14 times for 69 yards and a touchdown to help offset a rather rocky game for Baker Mayfield, who was under plenty of pressure himself and went just 15 for 33 for 155 yards.

“There’s a lot of easy throws there that I missed," Mayfield said. "Situationally, you get into running the ball and I don’t have a couple throws for a while, you get out of that rhythm.”

The return of Dalvin Cook from an ankle injury didn't make a difference for the Vikings, who took it easy on their star running back and gave Alexander Mattison plenty of use. Cousins didn't connect on enough of the quick throws the Vikings designed to minimize the pressure from Garrett, Jadeveon Clowney and the rest of a fierce front the Browns have assembled. Takkarist McKinley's third-and-3 sack ended Minnesota's first drive of the second half.

“Those two No. 1 draft picks were a pain today on our guys,” Vikings coach Mike Zimmer said, alluding to Garrett and Clowney.

Just when the Vikings appeared to find their breakthrough, a 37-yard completion to Jefferson on third-and-12 from their own 27 midway through the third quarter, tight end Tyler Conklin was called for holding in a daunting one-on-one blocking matchup against Garrett.

Stefanski kept the offense on the field on fourth down twice in the first half, as has been his tendency. Mayfield was sacked by Everson Griffen for an 11-yard loss on fourth-and-4 from the 6, stopping Cleveland's first drive cold.

Mayfield's fourth-and-goal pass from the 2 with 1:26 left before halftime was off target, but linebacker Eric Kendricks was called for holding to give the Browns a fresh set of downs. Finally, on the sixth straight snap from inside the 3-yard line, Hunt charged across the goal line. That drive began at the Cleveland 36 after Zimmer went for it on fourth-and-6, and Cousins failed to connect with Adam Thielen.

Then the game changed in a most unusual way. Sheldon Richardson, the former Browns defensive tackle, called a timeout the Vikings didn't have during a disheveled moment prior to the extra point attempt. The Browns went for 2 from the 1 and took the baseball-like 8-7 lead on a pass from Mayfield to fullback Andy Janovich.

“I wish we scored more when we possessed that ball,” Stefanski said, "But to keep that offense on the sideline was a big part.”

Chase McLaughlin made two critical field goals, a 53-yarder with 6:16 to go and a 48-yarder with 2 seconds remaining in the first half. That one was made possible by a 33-yard romp on third-and-20 by Hunt that caught the Vikings off guard when they were clearly expecting a long pass.

“They called a good play,” Griffen said, “and they hit us good.”

Browns: SS Ronnie Harrison Jr. left the game in the first quarter with a concussion and did not return. ... LT Jedrick Wills Jr. aggravated his ankle injury in the third quarter and didn't return. His replacement, rookie James Hudson III, was called for a false start on fourth-and-1 at the Minnesota 42 that forced the Browns to punt instead.

Browns: Play at the Los Angeles Chargers next Sunday.