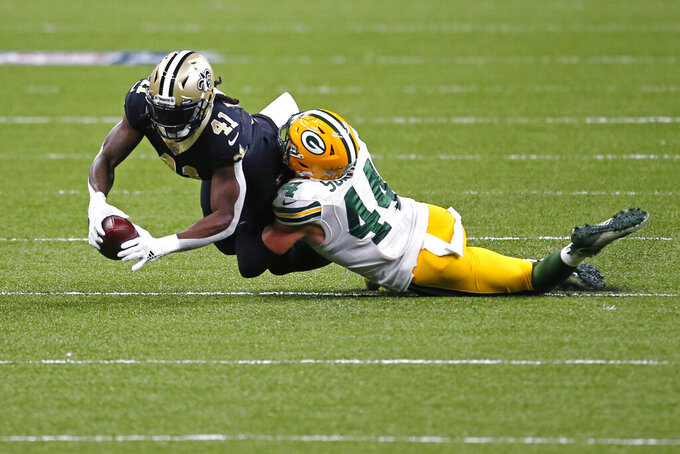 The 2019 seventh-round pick from TCU made a team-high nine tackles in a 37-30 victory at New Orleans after a shoulder injury knocked out starter Christian Kirksey. But after studying the tape, Summers gave his performance mixed reviews.

“I have high expectations for myself, so, I would say, not great,” Summers said. “Thank goodness it was enough to help get a win and so at the end of the day. That’s all that matters. But I’m just going to take things that I did right and the things that I did wrong, learn from them, try to work toward perfection for this next week.”

Summers could get plenty of chances to correct those mistakes, depending on how long it takes Kirksey to recover.

If Kirksey misses the Packers’ Monday night matchup with the Atlanta Falcons (0-3) or any other games, it could severely test their depth at inside linebacker. Kamal Martin, a rookie fifth-round pick from Minnesota who’d been having an impressive preseason, went on injured reserve three weeks ago.

Summers played 44 snaps against New Orleans, the most of any Packers inside linebacker. Before Sunday, all his regular-season action had been limited to special teams. He also wore the communication helmet on defense after Kirksey’s injury.

“I love having the responsibility of being kind of a leader out there, having to communicate calls, get people lined up,” Summers said. So I was just excited. I didn’t really feel nervous. I didn’t even really think about the fact that I was lined up against Drew Brees and guys like Alvin Kamara and all that until probably like the second or third series I was in. I was kind of like, ‘This is cool.’"

“He did a great job of relaying the calls to the other 10 guys on the field and helping guys get adjusted,” LaFleur said. “So, I thought that was really good. He made some really good plays and then, like every player, there’s always a couple plays here and there that you’ve got to get cleaned up.’’

“I had the chance to make a couple tackles that I thought were pretty good,” Summers said. “Looking at it, I was proud of myself for that. But for me, it’s always the ones that I left out there and I know, especially that long one on Kamara, that could have really helped us there. That could have saved a score, so things like that are the ones that kind of, you know, fuel me for the next week, the next opportunity to make sure I don’t do that again.”

He doesn’t have to look far to find a more generous appraisal of his performance.

Summers got married March 7, just before the start of the quarantine. While Summers wasn’t particularly happy about the way he played in New Orleans, the text messages he saw from his wife, Sidnee Jo, after the game had an entirely different perspective.

When Summers said he should have done better, his wife offered a pep talk. Summers recalled just what she told him.

“She was like, ‘Hey, stop it,’" Summers said. “She was like, ‘This is your first opportunity. You went out there. You made some great plays. Don’t focus on the bad stuff. You can’t change it now. Just go learn from it, move on, don’t do it again.’ I was like, ‘I mean, you’re right.’ No point in harping on it now.”