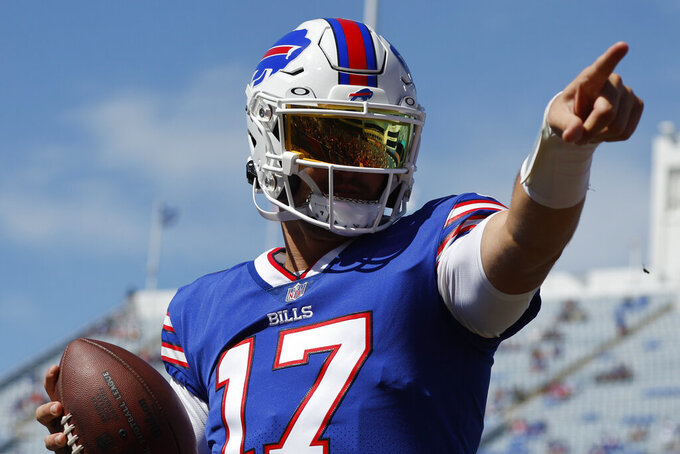 OPENING LINE: Bills by 2 1/2, according to FanDuel SportsBook.

TURNOVER DIFFERENTIAL: Bills plus-8; Rams plus-2.

BILLS PLAYER TO WATCH: QB Josh Allen. After coming up on the wrong side of an epic 42-36 overtime playoff loss to the Kansas City Chiefs despite throwing for 329 yards and four touchdowns without an interception, Allen is among the favorites to win Most Valuable Player this season. He accounted for five touchdowns in his only previous game against the Rams in 2020.

RAMS PLAYER TO WATCH: WR Cooper Kupp. Kupp won the receiving triple crown last season by catching 145 passes for 1,947 yards and 16 touchdowns, all tops in the league. He closed out one of the greatest seasons in NFL history by making eight receptions for 92 yards and two touchdowns in the Super Bowl, the second score coming with 1:25 remaining to win a championship for the Rams on their home field.

KEY MATCHUP: Bills DE Von Miller vs. Rams LT Joe Noteboom. Miller makes his Buffalo debut against his former team after closing last season with four sacks, six tackles for loss and one fumble recovery in the postseason to help Los Angeles win the Super Bowl. Buffalo signed Miller, the NFL’s active leader in sacks with 115 1/2, to upgrade what had been a middling pass rush. Noteboom, who steps into the starting lineup following the retirement of Andrew Whitworth, must keep his former teammate at bay to allow the Rams’ powerful passing game to function.

KEY INJURIES: Bills starting S Jordan Poyer is expected to play after missing the past month with a hyperextended left elbow. Backup OL Tommy Doyle (foot) and backup TE Quintin Morris (hamstring) are unlikely to play. ... Rams QB Matthew Stafford is not expected to be limited by pain in his right elbow. Stafford had an injection in his throwing arm that kept him out of spring practices, and his workload in training camp was carefully managed. ... WR Van Jefferson is out after undergoing knee surgery early in training camp. He started all 21 games for Los Angeles last season, but the Rams' offseason signing of Allen Robinson should mitigate his absence.

SERIES NOTES: The Bills have won the past two in the series and four of five going back to 2004. … Buffalo gave up 29 straight points in the second half to Los Angeles after taking a 28-3 lead in their most recent meeting, but Allen threw a touchdown pass with 15 seconds left to escape with the victory.

STATS AND STUFF: The Bills are making their first appearance in the NFL’s season-opening game. They are 3-2 to start the season under coach Sean McDermott. ... Buffalo has made three straight playoff appearances and four in five years under McDermott, who took over in 2017 when the Bills ended a 17-season playoff drought, which stood as the longest active drought in North America’s four major pro sports. ... Ken Dorsey makes his debut as an NFL offensive coordinator after being promoted from Bills quarterbacks coach to replace Brian Daboll, who took over the New York Giants. ... The Bills were 0-5 in games decided by seven or fewer points last year, and 2-6 when trailing at any point of a game. In 2020, they were 4-1 in games decided by seven or fewer points and 7-3 when trailing at any point. ... WR Stefon Diggs has combined for 230 catches for 2,760 yards and 18 touchdowns in two seasons in Buffalo since being acquired in a trade with Minnesota. ... The Bills’ 42 sacks were tied for 11th in the NFL last year, but 14 of them came in closing their season against Atlanta and the New York Jets. …Buffalo’s defense finished first in the NFL in numerous statistical categories, including fewest yards allowed, but padded its numbers by going 7-2 against quarterbacks with 16 or fewer starts. ... Los Angeles is 5-0 in season openers under coach Sean McVay, with an average margin of victory of 16.6 points. ... Rams DL Aaron Donald needs two sacks to reach 100 in his career. He would be the seventh active defender to reach the century mark. ... Los Angeles RB Darrell Henderson rushed for a career-high 114 yards on 20 carries with a touchdown at Buffalo in 2020. ... Stafford needs only 5 yards passing to top 50,000 for his career, becoming the NFL's 12th member of that club. ... Kupp was the fourth player in NFL history to lead the league in receptions, yards receiving and touchdown catches, joining Jerry Rice (1990), Sterling Sharpe (1992) and Steve Smith Sr. (2005). ... Rams DB Jalen Ramsey tied his career high with four interceptions last season. … Los Angeles ranked third in sacks (50) and fifth in tackles for loss (85).

FANTASY TIP: Even if this ends up as a repeat of the 2020 high-scoring thriller between the Bills and Rams, Buffalo WR Stefon Diggs might not be an automatic start. Although he beat Ramsey for a touchdown on one of his four receptions for 46 yards when they last faced off, Diggs will likely need to get back into the end zone to justify WR1 status.