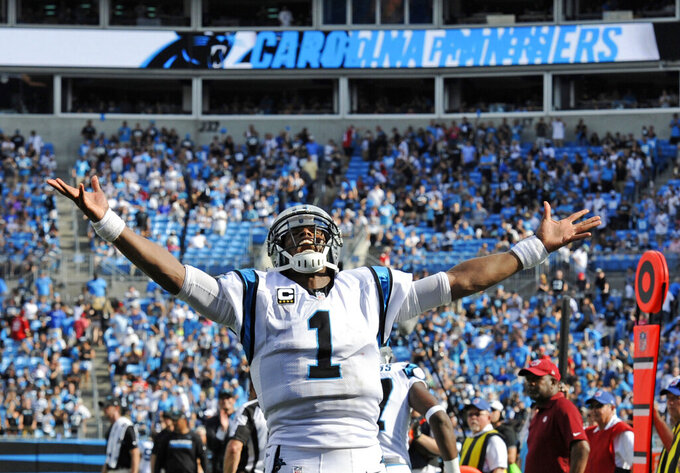 FILE - Carolina Panthers' Cam Newton (1) celebrates a touchdown against the San Francisco 49ers in the second half of an NFL football game in Charlotte, N.C., Sunday, Sept. 18, 2016. According to a person with knowledge of the situation, the Carolina Panthers have agreed to a one-year contact to bring quarterback Cam Newton back to the franchise that drafted him No. 1 overall in 2011. The person spoke to The Associated Press on condition of anonymity Thursday, Nov. 11, 2021, because the deal has not been announced by the team. (AP Photo/Mike McCarn, File)

Whether or not Cam Newton can rescue the Carolina Panthers' sinking season remains to be seen.

The Panthers (4-5) announced they've signed Newton to a one-year contract, bringing him back to the franchise that drafted him No. 1 overall in 2011 — and later cut him prior to the 2020 season after he lost eight straight games as a starter.

The deal is worth $10 million, including $4.5 million in fully guaranteed money and a $1.5 million roster bonus, according to a person familiar with the situation. The person spoke to The Associated Press on condition of anonymity because the team does not announce financial terms of players' contracts.

Carolina was in need of a quarterback after an MRI on Monday revealed starter Sam Darnold would miss at least four weeks with a incomplete fracture of his right shoulder blade. Rhule said he called Newton on Tuesday night to gauge his interest in returning to Carolina, and the quarterback was excited about the possibility.

“He loves Charlotte. He loves the Carolina Panthers. He made that very clear to me," Rhule said.

Rhule said P.J. Walker will still start Sunday against the Arizona Cardinals and Matt Barkley, signed off the Tennessee Titans practice squad earlier in the week, will serve as his primary backup. Rhule isn't sure if Newton would be active this week because he hasn't practiced yet.

Rhule wouldn't speculate on if Newton would be the starter beyond this week, but general manager Scott Fitterer said Newton “came here to play" — and the money the Panthers invested in him for the final eight games of the season is a strong indication they plan on him being more than just a backup.

Panthers cornerback Stephon Gilmore, who grew up about 30 minutes from Charlotte and played with Newton in New England, spoke to the importance of the QB's return to the Carolinas.

"There's a lot of important people in South Carolina and North Carolina, but Cam Newton is probably right up there at the top two or top one,” Gilmore said.

Outside the gates of Charlotte's Bank of America Stadium, a fan wearing Newton's No. 1 jersey stood waiting for the QB to arrive and greeted people entering the facility with a giddy smile saying “this feels like Christmas to me.”

Inside the empty bowl of the stadium the team lit up the scoreboards with the words “He's Back."

Newton met with owner David Tepper and Fitterer earlier in the day and later passed his physical. His plan was to stay late into the night to learn the team's playbook. He's expected to join his new teammates at practice on Friday.

“We had a heartfelt, sincere discussion with him and it wasn’t about anything in the past,” Fitterer said. “It was more about what are we going to do now moving forward and what is Cam’s role and how can he help us and what can we do to support him.”

Newton is expected to address the media on Friday.

Newton spent nine seasons with the Panthers, throwing for 29,041 yards with 182 touchdown passes and 111 interceptions. He also set an NFL record for most career touchdowns rushing by a quarterback during his tenure in Carolina.

He won league MVP honors in 2015 when he combined for a career-best 45 touchdowns — 35 passing and 10 rushing — and helped the Panthers go 15-1 during the regular season and reach Super Bowl 50. However, Newton struggled mightily on the game's biggest stage and the Panthers lost 24-10 loss to Von Miller, Peyton Manning and the Denver Broncos.

He's not been able to return to that MVP level since.

Shortly after Matt Rhule was hired in 2020, the Panthers cut Newton with questions surrounding the strength of his surgically repaired shoulder and a foot injury.

The move saved Carolina $19.1 million under the salary cap.

“We made a football decision at the time based on his health,” Rhule said. “Cam understands that these are football decisions and football-based evaluations that you have to make. ... He’s healthy now and you see he’s healthy. As he said to me, he’s as healthy as he possibly could be.”

Newton is 7-16 in his last 23 starts with 20 interceptions and 17 touchdown passes. He’s run for 16 touchdowns during that span. He was released on Aug. 31 after one season with the New England Patriots, with coach Bill Belichick going with rookie Mac Jones as his starting QB.

Meanwhile, the Panthers have struggled to find a replacement since Newton left.

Teddy Bridgewater went 4-11 as a starter last season before being traded to the Denver Broncos for a sixth-round draft pick. The Panthers then added Darnold earlier this offseason, but he's been a letdown with 10 interceptions in his last six games while playing in front of a stadium with plenty of empty seats.

Panthers wide receiver D.J. Moore said he's stayed in touch with Newton and even worked out with him one day in Atlanta this offseason.

Moore said Newton will bring “positive energy” to the team.