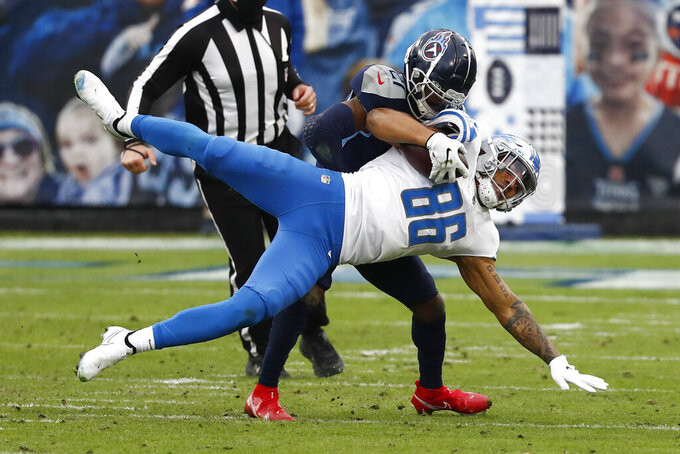 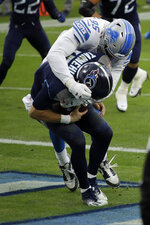 NASHVILLE, Tenn. (AP) — Tennessee is clicking on offense at a rate unseen in franchise history chasing the franchise's first AFC South title since 2008.

The Titans also think they can get better.

Ryan Tannehill accounted for a career-high five touchdowns passing and running, and Derrick Henry ran for 147 yards and a score to move the Titans closer to clinching their third playoff berth in four seasons Sunday routing the Detroit Lions 46-25.

The Titans (10-4) did their part with a second straight victory and fourth in five games to stay atop the AFC South. With Indianapolis beating Houston 27-20, the Titans hold the divisional tiebreaker over the Colts with two games remaining.

They also broke through with the first double-digit win season since 2008, ending a streak of four straight 9-7 seasons.

“Ten wins means nothing,” Tannehill said. “We have bigger goals than that we're just going to find a way to end each week 1-0. We did that. We're successful. Now we have to try to find a way to do that next week.”

The second straight loss after Darrell Bevell won his first as interim coach officially eliminated the Lions (5-9) from playoff contention. Quarterback Matthew Stafford shook off a rib injury to start, throwing for 252 yards and a TD before being pulled for Chase Daniel after Tennessee went up 39-18 with 9:00 left.

“I think it’s a valiant effort for him really to even get out there,” Bevell said. “It was amazing watching him during the week, and I just want to say that about him, just how tough and gritty he is."

Tennessee became the fifth team in NFL history with five straight games piling up at least 420 yards total offense and 30 points. The Titans scored a season-high with their fourth game of at least 42 points.

“We want to keep our foot on the gas,” Tannehill said.

Tannehill had the first five-TD game of his career. He ran for two TDs and finished with 273 yards passing and three more TDs, giving him a career-high 31 TD passes. He became the first Titans player to account for five TDs on the ground and through the air in the same game since Billy Volek did it 16 years ago against the Raiders.

Coach Mike Vrabel wasn't happy Tannehill dove for the pylon. Otherwise, the Titans scored on every drive except for when Tannehill was sacked in the end zone for a safety and when they knelt to run out the clock.

“He understands what we're trying to get done,” Vrabel said of the quarterback Tennessee signed to a four-year extension in March.

The Titans led 21-7 after a 75-yard TD pass from Tannehill to Corey Davis and a 17-yard TD run by Tannehill.

Tennessee's beleaguered defense that came into the game with the fewest sacks in the NFL and last on third down conversions forced three turnovers.

The Lions managed a 53-yard field goal by Prater in the third, tying the NFL record held by Sebastian Janikowski with his 58th career kick of 50 yards or longer.

The Titans put it away with 22 points in the fourth quarter with Tannehill's second TD run and two more TD passes.

The reigning NFL rushing leader also added to his collection of memorable stiff arms making Lions cornerback Alex Myres look like a rag doll with a mighty shove in the second quarter. Henry said he looks at how a defender is approaching him with most starting high and going low.

“I just waited and timed it and it worked,” Henry said.

The Lions quarterback didn't think he'd play earlier this week but said he decided Friday night he'd go. A makeshift line protected him, not allowing a sack only because center Joe Dahl's bad snap meant Teair Tart got a tackle for loss while taking Stafford to the ground.

“The pressure of another player’s weight on me was some of the worst stuff,” Stafford said.

The Titans' offensive streak with at least 420 yards and at least 30 points in five straight games tied the streak of the 1953 Philadelphia Eagles, the 1968 Oakland Raiders, 1999-00 St. Louis Rams and the 2020 Arizona Cardinals.

Lions: RT Halapoulivaati Vaitai, starting for Tyrell Crosby, was ruled out for the second half with a concussion. Cornerback Mike Ford also hurt a foot. Linebacker Jamie Collins Sr. was slow to get up after tackling Henry on a swing pass, and safety Tracy Walker was slow to get up a play later on the same drive in the third quarter for an already banged-up secondary.

Titans: Officials called a medical timeout with 4:22 left in the third for Titans safety Amani Hooker but he returned