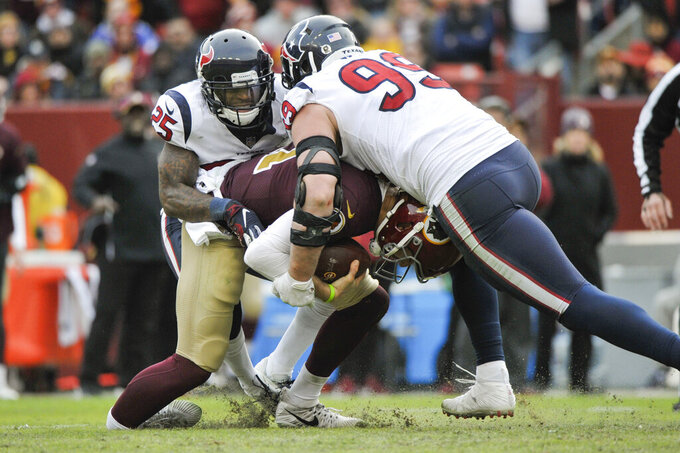 FILE - In this Nov. 18, 2018, file photo, Washington Redskins quarterback Alex Smith (11) injures his ankle as he is sacked by Houston Texans defensive end J.J. Watt (99) and Houston Texans strong safety Kareem Jackson (25) during the second half of an NFL football game, in Landover, Md. Alex Smith has finally shed the massive brace on his right leg eight months after breaking his tibia and fibula in gruesome fashion. Smith’s wife, Elizabeth, posted a photo Monday, July 15, 2019, of him holding the ring external fixator in his hand. (AP Photo/Mark Tenally, File)

Watt, a three-time Defensive Player of the Year, reportedly had knee surgery after last season. He shook off two years of injuries after he'd played just eight games total and earned All-Pro honors when he had 61 tackles, led the AFC with 16 sacks, had 25 quarterback hits, 18 tackles for losses and forced a career-high seven fumbles, which tied for the most in the NFL.

Hopkins hurt his right shoulder in the first half of Houston's loss to Indianapolis in an AFC wild-card game. He was second in the NFL with a career-high 1,572 yards receiving during the regular season

The Texans start training camp on July 25 and will open the regular season on Sept. 9 at New Orleans in the first game of a "Monday Night Football" doubleheader.