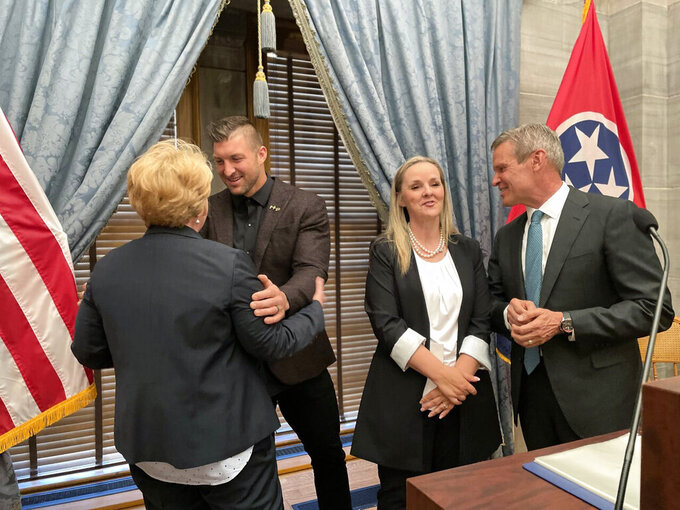 Tebow, who is considering a return to football with the Jacksonville Jaguars, is due for an infusion of $1.2 million into his foundation in the upcoming Tennessee state budget. The annual spending plan, which tops $42 billion, is sending more than $5 million combined to Tebow's organization and other groups to combat human trafficking.

The funding will help a ministry within the Tim Tebow Foundation, named Her Song, which seeks to build safe homes in the state alongside other funded organizations, Tebow said.

“We hope that this will facilitate and engage and inspire churches, nonprofits, organizations, individuals, to find out how they can be involved in rescuing women and children in Tennessee,” Lee said.

Tebow said the discussions on the issue began less than three months ago when country music star Luke Bryan and his wife Caroline introduced him to the governor's chief of staff, Blake Harris, at Bryan's restaurant.

Tebow, a former Florida star and 2007 Heisman Trophy-winning quarterback, is expected to sign a one-year contract to play for the Jacksonville Jaguars as a tight end, according to an NFL Network report Monday.

Tebow declined to discuss that Thursday when asked whether he would be signing with the team.

"Shocking that that was brought up," he said jokingly.

“I would say that today, that’s not the focus," Tebow said. "Today is about every life that’s being trafficked in the state of Tennessee, around the country and around the world.”