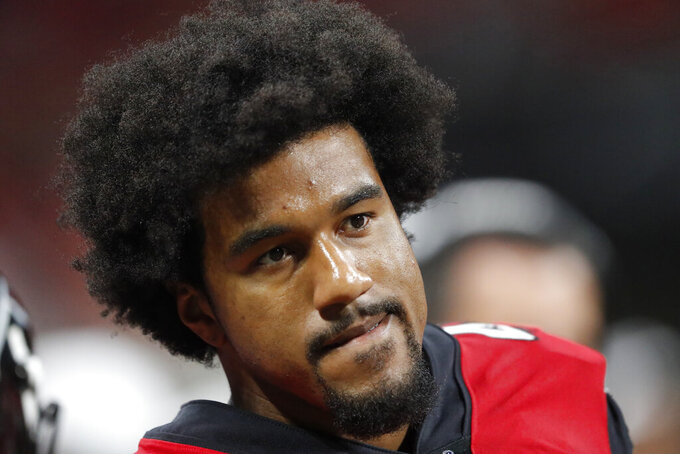 FILE - In this Aug. 15, 2019, file photo, Atlanta Falcons linebacker Vic Beasley (44) sits on the bench during the first half an NFL preseason football game against the New York Jets in Atlanta. Tennessee Titans general manager Jon Robinson says he has been in touch with Beasley and that the linebacker knows his absence from training camp is unexcused. The Titans signed him to a one-year deal for $9.5 million in March to help bulk up their pass rush. (AP Photo/John Bazemore, File)

The Titans announced Tuesday that Beasley must pass a physical before he can re-join practices. They also waived injured linebacker Reggie Gilbert.

Beasley, who signed a one-year deal for $9.5 million in March, waited 10 days before reporting for training camp. He had to pass three COVID-19 tests since reporting on Aug. 7 before taking a physical with the Titans.

“Vic's here, which I'm excited about,” coach Mike Vrabel said a couple hours before the Titans announced Beasley had been put on the non-football injury list. "He's been in the meetings, he's working through the same program, the same schedule that everybody else is.

The eighth pick overall in 2015 out of Clemson by Atlanta, Beasley led the NFL with 15 1/2 sacks in 2016 and has 37 1/2 sacks in his career. He started 15 of 16 games played last season and is expected to be a key piece of the defensive front opposite Harold Landry.

The Titans traded with Green Bay for Gilbert last August, and he started five of his 11 games with the Titans.