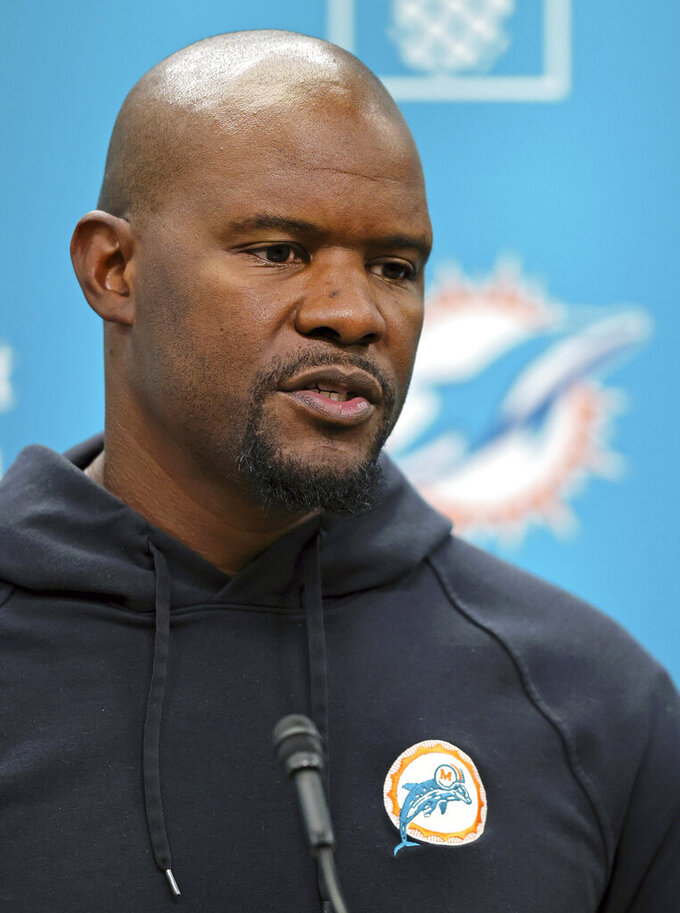 OPENING LINE: Tampa Bay by 9, according to FanDuel SportsBook.

DOLPHINS PLAYER TO WATCH: WR Jaylen Waddle. The Bucs are one of seven teams to have seen at least three different receivers have a 100-yard game against them this season. The Bucs’ success stopping the run, combined with the Dolphins’ inability to move the ball on the ground, suggest Waddle will see many opportunities this week.

BUCCANEERS PLAYER TO WATCH: CB Richard Sherman. The three-time All-Pro signed with the Bucs last week after missing most of 2020 because of injury. He practiced three days, then played all but one defensive snap against the Patriots. With three CBs out and/or on the injury list, Sherman’s experience and leadership is being counted on to help the beleaguered secondary weather the storm.

KEY INJURIES: Dolphins QB Tua Tagovailoa (fractured ribs) is out for at least one more game. WR Will Fuller (finger) has gone on injured reserve and Sunday will be the first game of at least three he will miss. CB Byron Jones (quad, Achilles tendon) is a question mark for Sunday as well. ... Bucs TE Rob Gronkowski (shoulder/hand), RB Giovani Bernard (knee), CB Jamel Dean (knee) and LB Jason Pierre-Paul sat out last week’s victory at New England, while CB Carlton Davis (quadriceps) exited in the first half and did not return. S Antoine Winfield, Jr., had an interception and forced a fumble against the Patriots before departing with a concussion that may keep him out Sunday. The status of the others likely will linger into the weekend.

SERIES NOTES: The last time Miami won at Tampa Bay, the Dolphins had Don Shula as coach, Dan Marino at quarterback and Raymond James Stadium was nearly a decade from being built. Miami won at Tampa Stadium 17-14 in 1988; the Dolphins are 0-3 at Tampa since. ... Including Sunday’s matchup, both teams will have had six different head coaches for the last six Dolphins-Bucs games. The last time a coach was in back-to-back games in this series was when Tony Dungy coached against Miami in 1997 and 2000. ... The Bucs have won five of the last six matchups. ... Winning margin has been three points or less in six of the 11 all-time meetings.

STATS AND STUFF: Brady has thrown for more touchdowns against Miami (67) than any two other quarterbacks in NFL history have combined (Drew Bledsoe had 31, Jim Kelly 29). ... Given his longevity, it’s no surprise that Brady also has more wins (23), completions (687), attempts (1,129), yards (8,185) and even times sacked (64) against the Dolphins than anyone else. He’s tied for second with 12 losses against Miami with Bledsoe; Joe Ferguson lost to the Dolphins 22 times. ... Brady has 18 double-digit win seasons in his career. The Dolphins have 23 of those in their 56-year history. ... Dolphins WR DeVante Parker is 199 receiving yards away from matching Duriel Harris (4,534) for sixth most in team history. ... Waddle has 25 catches through the first four games of his career. Only seven players have ever made more. ... Miami is 6-6 against Brady in the seasons immediately following his Super Bowl wins, going 1-1 against New England in each of the six years after his titles there. ... Bucs WR Antonio Brown, who has 899 receptions in 142 career games, needs one to pass Hall of Famer Marvin Harrison (149 games) as the fastest player to 900 catches. He’s also on the verge of joining Julio Jones, Jerry Rice, Torry Holt and Andre Johnson with 12,000 career receiving yards within the first 150 games of a career.

FANTASY TIP: The Bucs lead the NFL against the run, the Dolphins haven’t shown that they can run at all, so this is a week to expect a lot of catches for Waddle.