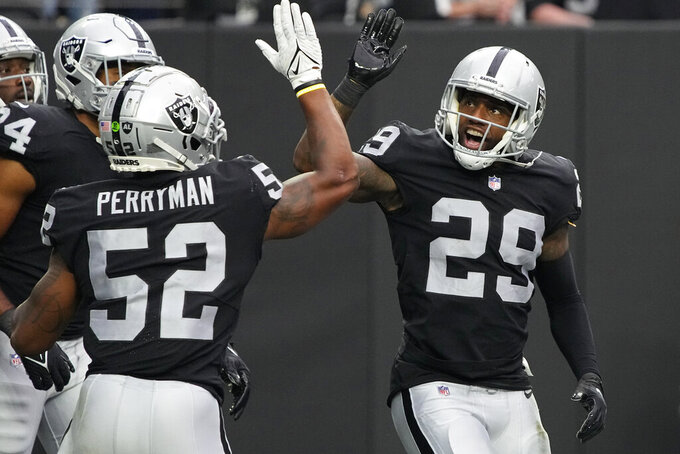 Las Vegas Raiders' Denzel Perryman, left, celebrates after cornerback Casey Hayward (29) made a safety against the Miami Dolphins during the first half of an NFL football game, Sunday, Sept. 26, 2021, in Las Vegas. (AP Photo/Rick Scuteri)

Through six games, he’s emerged as the star of a unit that desperately needed an upgrade.

“He does a good job, he’s very smart,” said Raiders defensive coordinator Gus Bradley, who served in the same capacity for the Los Angeles Chargers and coached Hayward from 2017-20. “He just has a good feel for route combinations and certain situations. Situational football. He’s been like that for the times I’ve known him. He brings that poise, too, back there as a group.”

Another former Chargers assistant who is a big fan of Hayward is Philadelphia coach Nick Sirianni, whose Eagles visit the Raiders Sunday.

Sirianni said he asked the two-time Pro Bowl cornerback plenty of questions during their time together. When Sirianni was coaching the Chargers' receivers in 2016 and 2017, his group had to deal with Hayward at every practice.

“I have so much respect for Casey,” Sirianni said Wednesday. “He’s just a student of the game, I got to pick his brain. That’s always been something I like to do, is pick the brain of DBs that I have a lot of respect for, so I always got to do that with him and find out what moves kind of worked on different guys. Casey was so smart, he’s a great guy to be around. It comes as no surprise he’s a leader in that locker room.”

Hayward has come up with timely plays in several games, including an overtime win against Miami on Sept. 26. Trailing the Dolphins 14-0, Hayward told fellow corner Trayvon Mullen someone needed to make a big play to provide a spark.

Then he backed up his words.

One play after Zay Jones raced downfield on a punt to down the ball on the 1-yard line, Hayward, who later revealed he was out of position, caught Miami receiver Jaylen Waddle on a screen pass in the end zone for a safety.

“I was just trying to do my job ... being in the right spot at the right time,” the 32-year-old Hayward said. “I’m okay with that being the first reception. Get some points on the board for us. It’s all right.”

First reception, as in, he hadn’t allowed one all season when targeted before Waddle caught the ball. Pro Football Focus grades Hayward as the top cornerback in the league in pass coverage. He also has the highest overall defensive grade among cornerbacks.

Heading into Sunday’s game against the Eagles, Hayward has the most coverage snaps (237) without allowing a TD this season, while the Raiders rank second in the NFL in yards allowed (5.5) per pass attempt.

Asked recently about those who suggested he was past his prime when he signed with the Raiders, Hayward laughed.

“I didn’t even know they said that, but for the media, I don’t care what they say,” said Hayward, who ranks fifth on the team with 15 solo tackles. “Good or bad, I just watch the film with our coaches and they’re gonna tell me if I played good or not. It don’t matter if they say I’m washed or not. My goal is just to go try and go out there and compete every week.”

“He’s super instinctive and that’s a huge deal, for people to be instinctive at their position,” Sirianni said. “He has what I like to call accelerated vision. He sees things happen before they happen based on his film study and based off of knowing his opponent. We know we have our hands full with him and we’re gonna have to give him some things he hasn’t seen before because we know what kind of player he is.”

“He’s been a veteran player, he’s been around the league, he’s much respected,” Perryman said. “He’s actually one of those guys I talk to about route concepts and trying to get better in the passing game. That’s somebody I definitely lean on, and I’m sure a lot of guys do.”