Vikings' miscues have them on outside of playoffs, again 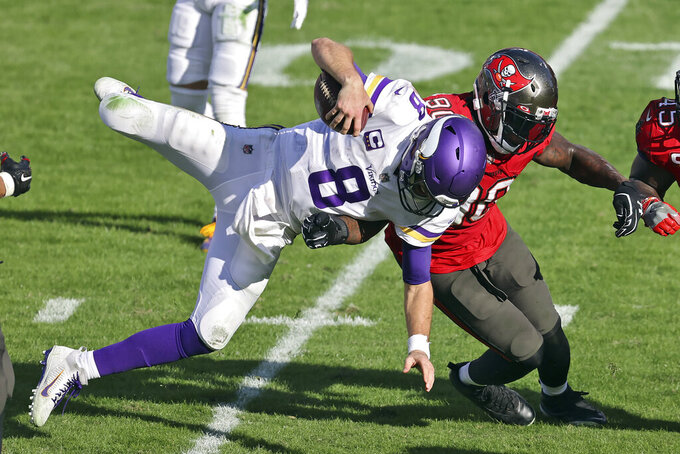 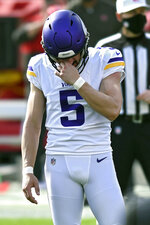 EAGAN, Minn. (AP) — Five wins in six weeks had put the Minnesota Vikings into the playoff hunt after their 1-5 start.

Yet, narrow victories against Carolina and Jacksonville the previous two weeks — and only one win coming against a team with a winning record — left some questioning whether Minnesota was worthy of a postseason spot.

The Vikings had a chance to legitimize their playoff status Sunday in Tampa. But Minnesota suffered too many breakdowns, highlighted by four missed kicks from Dan Bailey in a 26-14 loss.

Bailey missed one extra point and three field-goal attempts in the loss, accounting for 10 points Minnesota didn't get. Vikings coach Mike Zimmer said he’s weighing his options at the position, but has maintained there were other breakdowns that led to the loss.

“It’s not just Dan Bailey,” Zimmer said after the game. “We gave up a 50-yard throw because a couple guys weren’t in the right place. You can’t do that, either. If you guys want me to fire guys for making a mistake here, a mistake there, then we wouldn’t have any players. Let’s not put this all on Dan Bailey.”

On Sunday, Minnesota led 6-0 early even though Bailey had two early misses. The young defense was holding against Tom Brady and the Buccaneers until receiver Scott Miller got behind the defense for a 48-yard touchdown reception that snapped Tampa Bay out of its early funk.

“It definitely gives you hope and is something positive to look forward to, I guess,” Vikings linebacker Todd Davis said Monday of the team’s mistakes. “Because you know that if you correct those, you can really beat any team that you go up against. That’s a good team that we played on Sunday, but if we don’t have those self-inflicted wounds, we definitely win that game.”

Instead, Minnesota sits a game behind Arizona (7-6) for the final wild-card spot in the NFC. The Vikings are tied with Chicago, whom they host on Sunday, and hold the tiebreaker against both teams. There are three teams a game back at 5-8.

Whether Bailey will be a part of any potential playoff push is still to be determined. Zimmer said he hasn’t made a decision on who will be the kicker Sunday.

“Honestly, I love the kid,” Zimmer said Monday. “If we end up making a change, then it’s about just what we feel at this particular point in time. We are in the performance business and these last two weeks hasn’t been good.”

Against Tampa Bay's league-leading run defense, Minnesota had 33 rushes for 162 yards, the most allowed by the Buccaneers since Baltimore ran for 242 yards in Week 15 of the 2018 season. Dalvin Cook posted his seventh game of the season with at least 100 yards rushing, finishing with 102 yards on 22 carries, becoming the first 100-yard rusher against Tampa Bay since Seattle’s Chris Carson in Week 9 of last season.

After showing some improvement, the pass blocking from the offensive line has taken a step back the past two weeks. Kirk Cousins was sacked six times Sunday, which matched his career high. He was sacked four times the previous week against Jacksonville.

“There’s several things," Zimmer said. "We’ve got to do better there, for sure.”

With Kyle Rudolph out with a foot injury, tight ends Irv Smith Jr. and Tyler Conklin stepped forward. Smith had a career-high 63 yards and tied a career best with four catches, including a touchdown. Conklin led the team with five receptions, accounting for 40 yards.

Minnesota has been lacking a pass rush this season with two-time Pro Bowl defensive end Danielle Hunter out for the year, Everson Griffen not re-signed and Yannick Ngakoue traded after six lackluster games. Brady wasn’t sacked at all Sunday.

The Vikings needed Ifeadi Odenigbo to increase his production after being a steady role player. Odenigbo has 3½ sacks in 13 starts and has one sack over the past seven games. Ngakoue still leads the team with five sacks.

41 — That was Cousins' career-best rushing yardage on five carries Sunday. His previous high was 38 yards against Kansas City in 2017.

Minnesota can still work its way back into the playoffs depending on how Arizona finishes the season. If the Vikings want to give themselves any chance, they will likely need to beat Chicago on Sunday. Road games at New Orleans (10-3) and Detroit (5-8) finish the season.