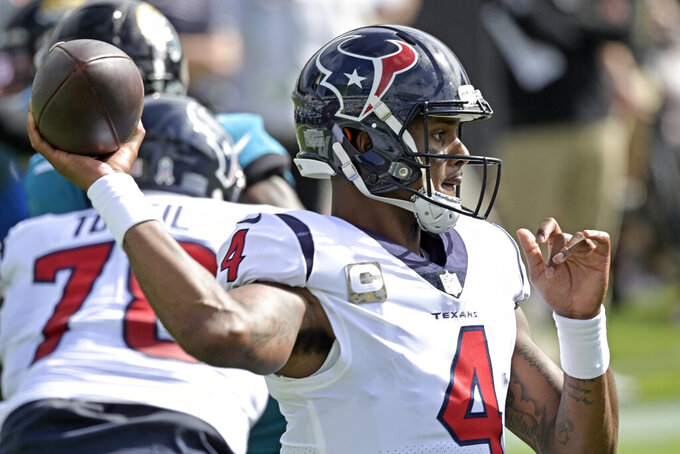 Houston Texans quarterback Deshaun Watson looks for a receiver during the first half of an NFL football game against the Jacksonville Jaguars, Sunday, Nov. 8, 2020, in Jacksonville, Fla. (AP Photo/Phelan M. Ebenhack)

Watson had touchdowns passes of 57 and 77 yards, the second one appearing to happen after the play clock expired, and the Houston Texans beat the Jaguars 27-25 on Sunday for their sixth straight win in the series.

All of them, including the team's only two wins this season, came with Watson at the helm. He has topped Jacksonville at home, on the road, in London with a swollen eye, in tight games, blowouts and even once while recovering from a broken rib and a bruised lung.

His latest victory could be pinned on two huge passing plays and several scrambles down the stretch.

“He’s a magician," Texans interim coach Romeo Crennel said. “I don’t know how he got out of some of it, some of those situations he was in. But he has a feel for finding the opening and being able to get through.”

Jacksonville (1-7) lost its seventh straight and avoided making NFL history. The Jaguars would have become the first to allow at least 30 points in seven consecutive games in a single season. Instead, they will share the record with the 1968 Denver Broncos and the 1984 Minnesota Vikings.

Jacksonville had a chance to tie it late, but rookie Jake Luton's 2-point conversion pass to DJ Chark landed at the receiver's feet in the end zone.

Luton completed 26 of 38 passes for 304 yards, including a 73-yard TD pass to Chark on the game's opening possession. He also ran for the score in his NFL debut, but threw an interception and had a fumble that a teammate recovered. With Gardner Minshew (thumb) still unable to throw, coach Doug Marrone said Luton would start next week at Green Bay.

Watson played a much cleaner game — no surprise given his success against Jacksonville.

He threw for 281 yards and two scores a month after his 301-yard, two-touchdown passing performance in Houston. He also ran for 50 yards Sunday.

“I was just making plays and the holes opened up,” he said. "So I just kind of took it and ran with it.”

He found Brandin Cooks on a crossing pattern on Houston’s first series. Cooks turned it up the sideline and outran defenders for 57 yards. Watson’s deep pass to Will Fuller was considerably tougher. Fuller stopped, cut inside CJ Henderson and then ran untouched the rest of the way to put the Texans (2-6) up 27-16 in third quarter.

Jaguars players screamed at officials as Watson snapped the ball, insisting the play clock was at zero, and Marrone was livid afterward. Replays showed it was a blown call.

“I'm not going to say anything stupid. I think you guys realize it.”

Texans star J.J. Watt notched the 100th sack of his career when he stripped Luton in the fourth quarter. Watt became the 35th player in NFL history to reach the century mark and the first to accomplish the feat for the Texans.

“I appreciate the sentiment and everything, but I probably should have done this three or four years ago," Watt said. “It's a big deal, but to me it’s past due.”

Jaguars kicker Josh Lambo tied a franchise record by making a 59-yard field goal at the end of the first half and injured his hip at the end of the game. Lambo drilled a low, line drive between the uprights and celebrated wildly with teammates at midfield.

Josh Scobee held the team record alone since 2010, when he hit a 59-yarder to beat Indianapolis in Jacksonville.

But Lambo also missed an extra point that proved costly late in the game and hurt himself attempting an onside kick, an injury Marrone said “doesn't look good.”

Crennel declined to say why he left starting cornerback Bradley Roby in Houston. The team said it was not injury- or COVID-19-related.

“Well, the Bradley Roby decision was a personal deal that we made together,” Crennel said. "And so I decided to leave him at home for this game. And that’s all I’m saying about that one.”

Texans: Already down three linebackers to start the game, Houston lost another in the first quarter when Brennan Scarlett injured an arm. He appeared to get X-rays and was later ruled out. Houston traveled without linebackers Whitney Mercilus, Jacob Martin and Dylan Cole because of COVID-19 testing and contact tracing.

Jaguars: Rookie receiver Laviska Shenault (hamstring) left in the first half and was ruled out at the break. Defensive lineman Doug Costin was evaluated for a concussion.

Texans: play at Cleveland. Houston has won five straight and seven of eight in the series.

Jaguars: play at Green Bay, which has won four of six meetings all time. Jacksonville last won in Green Bay in 2004.