Wilson's focus on being better after Jets' win a good sign 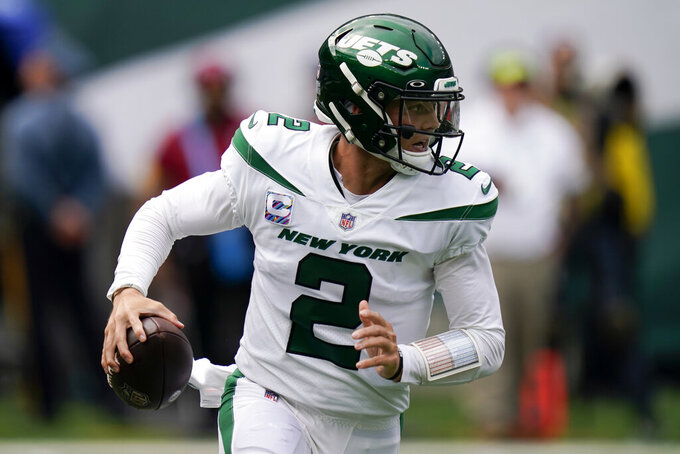 New York Jets quarterback Zach Wilson looks to pass on th run during the first half of an NFL football game against the Tennessee Titans, Sunday, Oct. 3, 2021, in East Rutherford. (AP Photo/Seth Wenig)

NEW YORK (AP) — Zach Wilson knew he could have done better. And he knows his first NFL victory should have come a lot easier.

Sure, he was happy after the New York Jets' 27-24 overtime win over the Tennessee Titans on Sunday. But the rookie quarterback spent a good chunk of the postgame celebration focused on his mistakes.

“The kid was outstanding,” coach Robert Saleh said shortly after the win. “There are still things that he knows he can clean up. He had a chance to end it in overtime, but the guy was resilient. He had resolve and he’s a playmaker.”

Wilson drove the Jets deep into Tennessee territory in overtime and had a good feeling.

“We did the hardest thing,” Wilson said. “Getting the ball down to the 1-yard line is the hardest part. We did an awesome job as an offense doing that and I told the guys in the huddle when we were on the 5-, 6-yard line: ‘A field goal is not an option here.’”

Except, it became the only option.

On first-and-goal from the 9, Wilson bounced a throw to Ryan Griffin, who probably would've had a clear path into the end zone if the ball had reached him.

“I’ve got to be able to come through, make a good throw,” Wilson said. “We called the right play, I threw a ball at (Griffin’s) feet. I’m going to learn from that. It’s awesome we came away with a win because I was beating myself up for that.”

After Tevin Coleman nearly scored taking a short toss from Wilson on second down, the quarterback rolled right and couldn't find anyone open — or space to run. Instead of throwing it away, he was pushed out of bounds for a 3-yard loss.

“I’ve got to be able to play smart situational football and give us another shot," said Wilson, who was 21 of 34 for 297 yards and two touchdowns with an interception.

Rather than go for it, Saleh opted for Matt Ammendola's 22-yard field goal. Wilson and the Jets then crossed their fingers a few minutes later as Randy Bullock missed a potential tying 49-yarder.

Wilson showed several flashes why he was the No. 2 overall draft pick in April. And the fact he instead was critical of his play rather than reveling in the celebration said a lot.

Maybe even more than the eye-popping plays on the field.

“I saw a lot of leadership, a lot of confidence,” Coleman said. “He didn't give up. He went out there and he did his thing, and he threw that ball like he can.”

Pass rush. Whoa, where'd that come from? Well, everywhere, as far as Ryan Tannehill was concerned. The Jets' seven sacks came after they had just six entering the game. Led by Quinnen Williams, who had two of the seven, New York had seven or more sacks for just the fifth time in the last 10 seasons and first since also having seven against Buffalo in 2017.

Defending screen passes. Opponents have clearly identified that's one way to move the ball on the Jets. Tennessee's two biggest-yardage plays came on screens: a 27-yarder on a short toss to Jeremy McNichols on third-and-21, and a 23-yarder to McNichols on second-and-13.

“It’s a combination of just do your job, run your tail off to the ball and the screen will take care of itself,” Saleh said. “We’ll get better at it as the year goes on, but it’s always going to be something that we get, especially with our D-line hunting the way it is.”

Quincy Williams. The older brother of defensive tackle Quinnen Williams was claimed off waivers from Jacksonville shortly before the season and the linebacker had the best game of his three-year NFL career. He had 12 overall tackles, a pass defensed, a quarterback hit and his first career sack, combining with Quinnen (who had two), to become the first brothers to each take down a quarterback as teammates in the same game.

Denzel Mims. His stock was already pretty low, but the wide receiver was active for the first time since the opener with Elijah Moore and Jeff Smith sidelined with concussions and still had no impact. The 2020 second-rounder played just 10 snaps on offense and had no targets against Tennessee.

Moore is expected to clear the NFL's concussion protocol after missing the game against Tennessee. Saleh said he's day to day, as are Smith and rookie CB Brandin Echols, who remain in the protocol.

The Jets have a chance to put together a winning streak as they head to London to take on the 1-3 Atlanta Falcons at Tottenham Hotspur Stadium next Sunday morning. It will be New York's second game played in England, and first since beating Miami 27-14 in 2015.