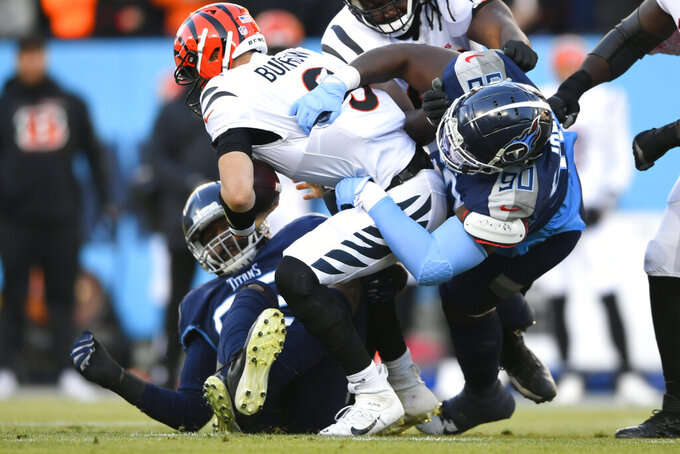 Talk about newcomers versus the tried and true.

Here come the Cincinnati Bengals, who had lost eight straight playoff games since their last victory 31 years ago. Awaiting them at loud, sometimes intimidating Arrowhead Stadium will be the Kansas City Chiefs, in their fourth consecutive AFC championship game and seeking their third trip in a row to the Super Bowl.

This is hardly the matchup most NFL observers expected. Sure, the Chiefs made sense, but the often-mocked Bengals — Bungles no more — were a surprise last to first winner of the AFC North. Now, here they are, one step from their first Super Bowl appearance since 1989.

How do they match up with the Chiefs?

WHEN THE BENGALS HAVE THE BALL:

This pass-catch combination was dynamic at LSU and has made a huge splash in the NFL. Burrow, whose rookie season in 2020 was cut short by a knee injury, made a sensational return and is as accurate as any passer in the league. He had 34 touchdown passes and 14 interceptions during the season, and thus far in the playoffs is 52 of 71 (73.2%) for 592 yards and a 101.4 QB rating. Chase has 14 catches for 225 yards (16.1 per reception) after scoring 13 times on 81 receptions in the regular season. The two hooked up 11 times for 266 yards and three TDs in a 34-31 win over the Chiefs on Jan. 2.

Kansas City knows it must slow down the elusive and supremely athletic Chase, but does it have the defensive backs to do so? It sure didn't look like it against Buffalo, when CBs Charvarius Ward (35), L'Jarius Sneed (38) and safeties Daniel Sorensen (49) and Juan Thornhill (22) struggled mightily. If star FS Tyrann Mathieu (32, concussion) can't go, not only Chase but Tee Higgins (85), Tyler Boyd (83) and emerging TE C.J. Uzomah (87) could be dangerous.

Uzomah, however, might be needed to help block after Cincinnati allowed nine sacks at Tennessee. The Chiefs, under aggressive coordinator Steve Spagnuolo, have a solid pass rush, which they'll clearly need. Bengals tackles Jonah Williams (73) and Isaiah Prince (71) must deal with Chris Jones (95) and Frank Clark (55) on the outside, while DT Jarran Reed (90) has been superb in the playoffs. And watch for Chiefs weakside LB Nick Bolton (54) to have some impact.

If the Bengals can get the running game on track with Joe Mixon (28), who ranked third with 1,205 rushing yards, they might have the balance they need.

WHEN THE CHIEFS HAVE THE BALL:

As they showed in the shootout with the Bills, the Chiefs need only, say, 13 seconds to produce in crunch time. Not only are they the most entertaining offense in the league, but with QB Patrick Mahomes (15), WR Tyreek Hill (10) and TE Travis Kelce (87), they are as creative as anyone.

Mahomes has certified himself with his arm, legs and mind as the real thing. With him, the numbers — albeit great — are almost superfluous as he finds a way on so many plays, particularly in the most dire circumstances.

One thing the Bengals defense will need is a relentless pass rush against a stout but not impenetrable line. Cincy sacks leader Trey Hendrickson (91) is the primary pass rusher, though DE Sam Hubbard (94) and DT D.J. Reader can be trouble.

It doesn't hurt that Mahomes has a sixth sense for escaping pressure, but he needs his blockers, particularly LG Joe Thuney (62) and LT Orlando Brown Jr. (57) to hold up. Rookie C Creed Humphrey (52) has been a real find.

While Mahomes has other playmakers — WRs Mecole Hardman (17) and Byron Pringle (13), RBs Jerick McKinnon (1) and Clyde Edwards-Helaire (25) — moving the ball and, especially, finding the end zone usually comes down to Kelce and Hill.

The unenviable task of dealing with them goes to nearly everyone, from LBs Logan Wilson (55) and Germaine Pratt (57) to a deep group of defensive backs: CBs Chidobe Awuzie (22), Mike Hilton (21) and inconsistent Eli Apple (20), plus backups Tre Flowers (33) and Trae Waynes (26), and safeties Vonn Bell (24) and Jessie Bates (30).

When a last-place team drafts a kicker in the fifth round, fans scratch their heads. Well, the Bengals are a division winner and one step from the Super Bowl thanks to Evan McPherson (2). The kid simply doesn't miss: His four fields goal in the wild-card round were the most for a rookie in his postseason debut, and he nailed the winner in Music City.

P Kevin Huber (10) did not have a particularly strong season, but he's a veteran accustomed to punting outdoors in the cold, which will help in KC. Coverage units were fine.

Cincy defends runbacks well, but is not much of a threat on its own returns.

Pringle is more of a threat than any of the Bengals on kick returns, while the Chiefs use a variety of dangerous players to bring back punts. Hardman and CB Mike Hughes (21) do most of the work, but the Chiefs will use Hill when they need a big play; he delivered with one on a punt return against Buffalo.

Although he missed two kicks against the Bills, Harrison Butker (7) has a huge leg and has been very reliable for the Chiefs, and he bounced back to hit the 49-yarder to force overtime last weekend. On the other side, McPherson is the real deal.

Maybe the biggest discrepancy in this game is the resume for each coach.

That's not a knock on Cincinnati's Zac Taylor, who has helped turn around a moribund franchise and has an exciting group on offense. This is a team that doesn't panic, and when could that be said about the Bengals?

Still, the master in this one is Andy Reid, who could join that limited group with three or more consecutive Super Bowl appearances: Don Shula, Marv Levy, Bill Belichick. Reid relies heavily on his assistants (Spagnuolo, OC Eric Bieniemy, special teams coordinator Dave Toub) and they all keep things fresh and innovative. Watch for something new Sunday.

What do the Bengals have to lose? They're a year early, by most estimations, in their development, and the experience can only help them in the future. So they should be able to play loose and free.

Plus, they know when they've needed big plays in the past month or so, they have made them.

For the Chiefs, it's Super Bowl or bust, as it has been since Mahomes took charge.