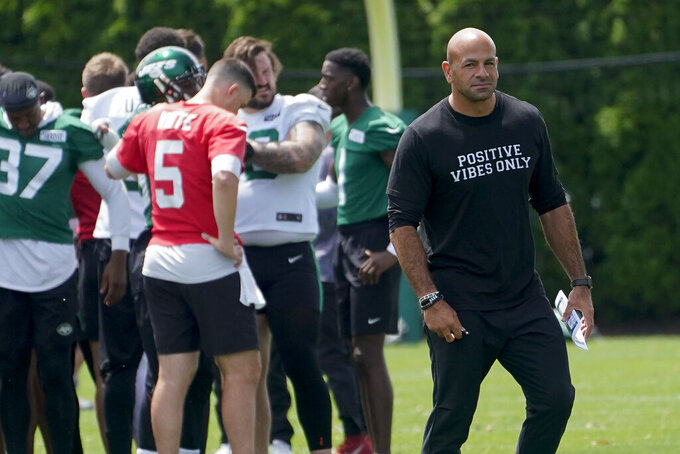 LAST YEAR: Robert Saleh's first season as coach of the Jets was a rough one, with rookie quarterback Zach Wilson struggling early and then missing four games with a knee injury. But the No. 2 overall pick bounced back late by throwing no interceptions in his last five games, giving the organization some optimism about the QB's potential for this season. Perhaps the biggest highlight came when backup QB Mike White made his first NFL start in Wilson's place and beat eventual AFC champion Cincinnati 34-31 on Halloween by going 37 of 45 for 405 yards and three TDs and catching a 2-point conversion pass. New York's defense struggled mightily throughout the season, ranking last or among the worst in several key statistical categories.

CAMP NEEDS: All eyes will be on Zach Wilson to show tangible signs of progress during the summer to give the Jets confidence he'll be more like the QB who was solid in the second half last season than the one who was treading water as a wide-eyed rookie early on. Wilson has a few more playmakers now in Uzomah, Conklin, Garrett Wilson and Hall, so that should help. The new-look secondary and restructured offensive line will need the summer to jell as units.

KEY CAMP COMPETITIONS: George Fant and Mekhi Becton will compete for the starting job at left tackle — with the loser expected to move to the right side. It was Becton's gig going into last season, but he dislocated his right kneecap and sprained his MCL in the opener and missed the rest of the year. Fant slid into Becton's spot and was solid as one of the team's few bright spots. Becton, who missed all of the voluntary offseason workouts to be with his girlfriend who had the couple's first child, is expected to be healthy to begin camp. While Reed, one of the Jets' key free agent signings, will start at one cornerback spot, Gardner and Bryce Hall, the incumbent starter, will compete for the other. Saleh said during the spring Gardner, the No. 4 overall pick, will have to take the job from Hall. Other key competitions will be at kicker (Zuerlein vs. Eddy Pineiro) and safety (Lamarcus Joyner, Ashtyn Davis and Jason Pinnock).

EXPECTATIONS: The Jets, who haven't made the playoffs in an NFL-worst 11 seasons, feel good about their chances of at least competing for the postseason this year because of the additions on offense and defense via free agency and the draft. A lot, of course, will ride on whether Wilson actually takes some major steps toward being a franchise-type quarterback. The schedule, though, is daunting: The first four games are against the AFC North, followed by a home game against AFC East rival Miami, road games at Green Bay and Denver, and divisional home games against New England and Buffalo before the bye-week break.