For Alliance exiles, NFL training camps have sure felt good 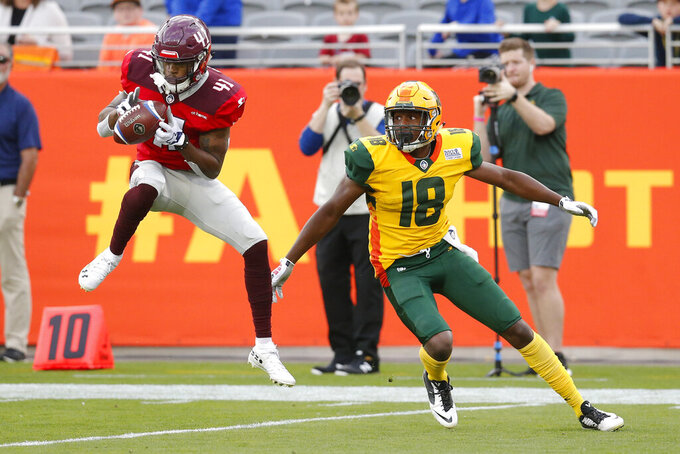 FILE - In this March 10, 2019, file photo, San Antonio Commanders defensive back De'Vante Bausby (41) intercepts the ball that was intended for Arizona Hotshots wide receiver Marquis Bundy (18) in the first half during an AAF football game at Sun Devil Stadium in Phoenix. Bausby signed with the NFL's Denver Broncos. Not all the AAF exiles were able to secure a new job so quickly, if at all, but for those that played in the failed developmental league it at least provided some bonus playing time even if the experience so ended abruptly and awkwardly. (AP Photo/Rick Scuteri, File)

EAGAN, Minn. (AP) — Karter Schult and his Salt Lake Stallions teammates were assembled one day this spring for what began as a position group gathering for the defensive linemen when someone in the room glanced at his phone.

Their employer, the American Alliance of Football , was halting operations just two months into its first and only season.

"The coaches didn't know. Our general manager wasn't at the facility at the time," Schult said. "We were still skeptical. Then sure enough, we had a team meeting about 20 minutes later telling us that the league is gone."

The news, mostly met with shrugs or smirks among sports fans across the country if not unnoticed altogether, sent the players into quite the scramble, perhaps none more disrupted than Schult. The 25-year-old defensive end, who is currently with the Minnesota Vikings, the fourth NFL team that has had him on the roster, was a mere four days away from getting married when the announcement came.

Fortunately for Schult, a former FCS star at Northern Iowa, he wasn't going to be out of a job. His agent had a verbal agreement with the Vikings, who were already interested in signing him after the AAF season ended. The Vikings had a contract waiting for Schult, but he had to pass the requisite physical exam at headquarters first.

Even though the wedding was in Iowa, their home state, making it to Minnesota prior to the ceremony would have been too tight.

"We were trying to go home and set up the venue and stuff, and I didn't want to give my wife a heart attack," Schult said, "so I asked if they could move it back a week. The Vikings were gracious enough to wait."

Well, at least for a little while.

"My wife went on the honeymoon without me," Schult said, smiling.

As he joined his new teammates for offseason workouts, Schult's bride Marissa took the two-week trip to Italy with another family member. The newlyweds will wait for the next soft spot on the pro football calendar to take their official voyage as husband and wife.

"She's such a trooper," Schult said. "We've been married for a little more than four months now, and we haven't really lived together because she's back home in Iowa and I'm up here. It's tough at times, but she's great."

At the end of this week, more than 800 players around the NFL will be unemployed as teams reduce their rosters for the games that count. Most of them will return to the not-so-glamorous, reliably nomadic lifestyle of working out on their own, driven by the hope their agent will get another call from an NFL club.

Another developmental league will commence next year, the reprise of the XFL, which will try to avoid the fate of the AAF, the latest failed league to land on the scrap heap of alternatives to the NFL. That doesn't mean the experience was for naught, though, despite the rocky finish.

"In the offseason, what you want to do is right your wrongs," said Denver Broncos cornerback De'Vante Bausby, who played for the San Antonio Commanders. "So, what better way to right your wrongs than actually playing? That's how I looked at it."

Quarterback Logan Woodside, who's in line to be Tennessee's third stringer, returned to the Titans in April after spending time on their practice squad last fall. He sharpened his skills in the AAF with the Commanders, taking actual contact that never comes in NFL practices out of injury precaution.

"Guys can stand in there and slide and move and operate in the pocket," Titans coach Mike Vrabel said. "So, yeah, anytime a quarterback can be in a live situation, that can probably help."

Enduring the chaos and disappointment ought to serve these players for the better as long as their professional football career lasts. Running back Justin Stockton, who has been in camp with the Detroit Lions, wound up playing his last AAF game with the Arizona Hotshots in his hometown of San Antonio. He had just returned to Arizona, when the shutdown forced him and his family into the car for the 14-hour drive back to where he'd just been.

The experience Memphis Express players had was as rough as any, with some players purportedly stuck with hefty hotel bills when the AAF was suspended. Center Demetrius Rhaney, who signed with the Buffalo Bills earlier this month after spending time with the Express, wound up with an invoice for an MRI exam he had on his hand.

"They don't know who to get in contact with to pay it," Rhaney said. "So I might just bite the bullet."

When he picked up the mail, he was hoping it was one last paycheck.

"But it was a bill. The total opposite," Rhaney said. He added: "If that's the price I have to pay to get game film, it's well worth it."

That's the way it has to be for these dream chasers.

"You never know when your last opportunity will come about," Schult said, "and you'll play your last snap of football."