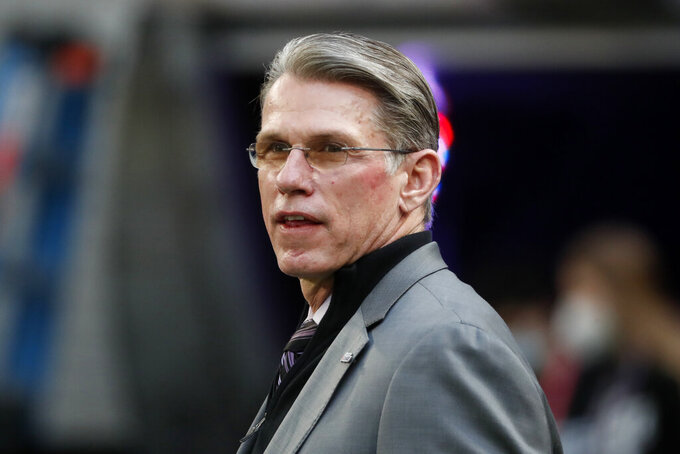 FILE - Minnesota Vikings general manager Rick Spielman stands on the field before an NFL football game against the Chicago Bears, Sunday, Jan. 9, 2022, in Minneapolis. The Minnesota Vikings fired general manager Rick Spielman and head coach Mike Zimmer on Monday, Jan. 10, 2022, according to a person with knowledge of the decision, after a second straight absence from the playoffs. The person spoke on condition of anonymity because the Vikings had not yet made the announcement.(AP Photo/Bruce Kluckhohn)

The Jaguars interviewed former Minnesota general manager Rick Spielman on Monday for an undisclosed front-office role, according to a person familiar with the process. The person spoke to The Associated Press on condition of anonymity because the team has kept details of its search private.

It's unclear what role Spielman could take on in Jacksonville. He could become an assistant GM under Trent Baalke. The 59-year-old Spielman spent the last 16 years in Minnesota, the past decade as the team's GM. He was fired following this season, the second straight year the Vikings missed the playoffs.

The 61-year-old Bisaccia, a longtime NFL special teams coordinator who also spent more than a decade in the college ranks, took over in Vegas after Jon Gruden resigned amid an email scandal in mid-October. The Raiders went 7-6 under Bisaccia, including a wild-card loss to Super Bowl-bound Cincinnati two weeks ago.

The Jaguars also would like to interview Los Angeles Rams offensive coordinator Kevin O’Connell but would have to wait until after the Super Bowl to do it. Under NFL rules, O’Connell can’t meet with Jacksonville until after the Super Bowl because the Jaguars didn’t have an initial interview with him during the final two weeks of the regular season or the first week of the postseason.

The 36-year-old O’Connell interviewed with Houston on Monday and has a second one scheduled with Minnesota this week.

Tampa Bay offensive coordinator Byron Leftwich remains a long-shot possibility in Jacksonville. He had a second interview with Khan, son Tony Khan and Baalke in person last week in Tampa, but discussions cooled the following day, presumably over Baalke’s status with the team.

Leftwich would prefer not to work with Baalke, according to another person with knowledge of the situation. Baalke has a less-than-stellar reputation around the league, evidenced by his last five seasons ending with a coaching change.

The 57-year-old Baalke remained in place after Khan fired Meyer in mid-December, a move that irked fans enough for them to organize a “clown out” protest for the season finale against Indianapolis. A few hundred fans showed up dressed in colorful wigs, oversized bowties and red noses.

But Khan appears committed to keeping Baalke even though the GM’s presence has proven to be a stumbling block in a coaching search that has stretched nearly 50 days.