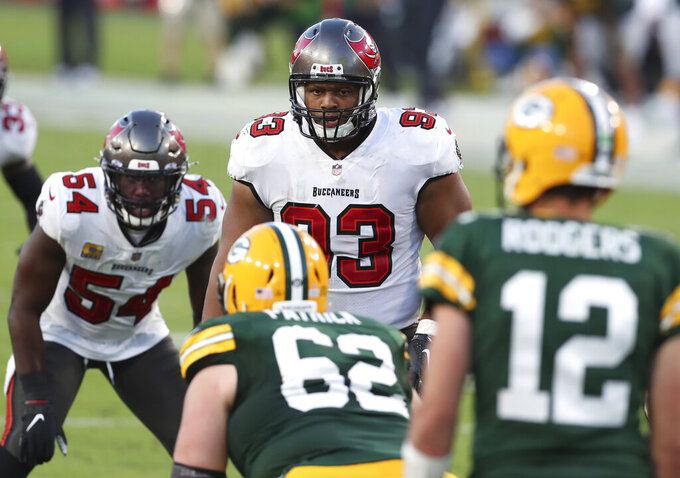 FILE - In this Oct. 18, 2020, file photo, Tampa Bay Buccaneers defensive end Ndamukong Suh (93) and inside linebacker Lavonte David (54) line up against the Green Bay Packers during the second half of an NFL football game in Tampa, Fla. Suh has agreed to a one-year contract worth $9 million to remain with the Super Bowl champion Buccaneers, a person familiar with the deal told The Associated Press. (AP Photo/Mark LoMoglio, File)

TAMPA, Fla. (AP) — Defensive lineman Ndamukong Suh has agreed to a one-year contract worth $9 million to remain with the Super Bowl champion Tampa Bay Buccaneers, a person familiar with the deal told The Associated Press.

The person spoke to the AP on condition of anonymity Wednesday because the agreement, as well as a salary-cap friendly extension given to offensive lineman Donovan Smith, had not been announced by the Bucs.

Smith, who was to earn $14.25 million in 2021, agreed to a two-year, $31 million extension that frees space under the salary cap as general manager Jason Licht continues the team's effort to keep as much of a championship roster together as possible.

The left tackle, who including playoffs started 19 of 20 games last season, joins Tom Brady in negotiating extensions that improve the prospects of keeping several high-profile players from leaving the team via free agency.

It’s the third straight winter Suh has agreed to a one-year deal with the Bucs, who’ve led the NFL in run defense each of the past two seasons. He earned $10 million in 2019 and $8.5 million in 2020.

The 34-year-old who was the No. 2 overall pick in the 2010 draft had six sacks last year, hiking his career total to 64½ in 11 seasons with the Bucs, Detroit Lions, Miami Dolphins and Los Angeles Rams. He had 1½ sacks in the Super Bowl, helping Tampa Bay slow down Patrick Mahomes during a 31-9 victory over the Kansas City Chiefs.

Suh’s deal ensures all 11 starters on defense will be under contract for next season. Linebackers Shaquil Barrett and Lavonte David signed new contracts rather than test free agency, and reserves Rakeem Nunez-Roches and Kevin Minter are staying, too.

Brown and Fournette both played for Tampa Bay on one-year deals in 2020.