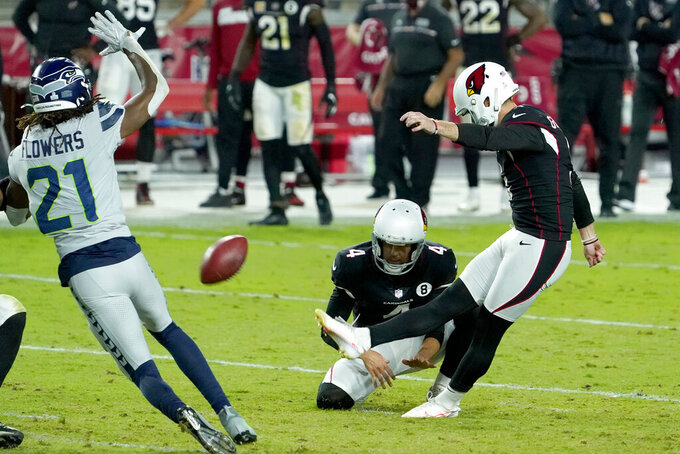 GLENDALE, Ariz. (AP) — The NFC West has a new challenger for the top that's won three straight games. The Arizona Cardinals earned a few style points with the way they pulled off this prime-time thriller, too.

Zane Gonzalez made a 48-yard field goal with 20 seconds left in overtime to give the Cardinals a 37-34 victory over the Seattle Seahawks in a Sunday night show that featured 1,091 total yards, huge plays, crucial mistakes and — finally — a winner.

“These are the games you honestly dream about,” Arizona quarterback Kyler Murray said.

Seattle led all of regulation until Gonzalez made a 44-yard field goal as time expired to tie it at 34. It meant an entertaining quarterback duel between Murray and Seattle’s Russell Wilson would continue.

And that’s when the crazy really got started.

The Cardinals stopped the Seahawks opening drive in overtime and then quickly moved downfield. On second-and-15, Arizona coach Kliff Kingsbury elected to go ahead and try for the field goal. Gonzalez made the 41-yarder, but Kingsbury called a timeout just before the snap because the play clock was winding down. Gonzalez missed wide left on the next attempt.

“That was pretty bad,” Kingsbury said of the sideline and clock management. “Pretty much a complete debacle. But luckily those guys bailed us out.”

Moments later, it appeared Seattle had won on the ensuing drive when DK Metcalf caught a 48-yard touchdown pass, but the play was called back because of holding on receiver David Moore. Wilson threw an interception on the next play. The pass was picked off by rookie Isaiah Simmons.

That gave Gonzalez the chance for redemption. He nailed the winner to knock off the previously undefeated Seahawks and set off a raucous celebration at midfield.

“I thought we played a great game except for those three plays, I mean honestly," Wilson said. "Those are my fault. There’s so much that we can do, and we have so much confidence. Our confidence is not going to waver. They’re a great football team too. We knew it was going to be a battle

Seattle's Carlos Hyde had a 24-yard touchdown run in the second quarter. Tyler Lockett caught three touchdowns passes and had a career-high 200 yards receiving on 15 catches.

The Cardinals pulled to 27-24 on Murray's 5-yard touchdown run in the third quarter. Arizona had a chance to take the lead early in the fourth after Wilson's pass was picked off by Patrick Peterson in the end zone.

But Murray threw an interception on the next play. The throw was intended for Andy Isabella but sailed way off target and was caught by a diving Quandre Diggs. That set up Lockett's third touchdown catch of the night and a 34-24 lead. He caught a 3-yard pass from Wilson, deftly dragging his feet in the end zone just before he fell out of bounds.

But the Cardinals (5-2) weren't done. Christian Kirk caught an 8-yard touchdown pass with 2:28 left to pull Arizona to 34-31. Seattle had to punt on the ensuing drive and the Cardinals needed just 52 seconds to move 54 yards and Gonzalez kicked the tying field goal.

“I don’t think I smiled all game,” Murray said. “It just felt like we had to keep our heads down and keep grinding. When you are playing against Russell, anything is possible. I think everybody saw that tonight."

The action-packed first half featured 377 yards of total offense from the Seahawks (5-1), who took a 27-17 lead into the break. They would score just seven points the rest of the game.

The Seahawks opened with a flawless first drive that featured a spectacular, one-handed catch by Tyler Lockett for a 34-yard gain on the game's opening play. Seattle cruised 75 yards in just six plays, finishing with a 6-yard touchdown pass from Wilson to Lockett.

Metcalf’s hustle play in the second quarter saved a touchdown. Wilson lofted an off-target pass at the goal line, Cardinals safety Budda Baker snagged it easily and looked like he would run untouched 98 yards for a game-changing pick-six.

But Metcalf never gave up on the play, accelerating over the final 20 yards to catch Baker from behind at the Seahawks 8. The Cardinals scored zero points on the ensuing drive after Murray’s fourth-down pass fell incomplete.

“It was one of the best football plays I’ve ever seen,” Carroll said. “It was just remarkable.”

Sunday's game was a showcase for short guys. Wilson's listed height is 5-foot-11, while Murray checks in at 5-10. According to NFL Research, it's the first game of the Super Bowl era in which two quarterbacks under 6 feet tall finished with more than 250 yards passing in a game.

Arizona wide receiver Larry Fitzgerald continues to add to his impressive career, catching a pass for a 250th consecutive game. His first catch Sunday, which came late in the second quarter, was the 1,400th of his career. That's the second-most in NFL history, trailing Hall of Famer Jerry Rice, who caught 1,549 passes.

Seahawks: Rookie RG Damien Lewis (knee) left the game in the second quarter. ... RB Chris Carson (foot) left the game just before halftime. ... CB Shaquill Griffin was evaluated for a concussion in the third quarter and did not return.

Cardinals: DE Zach Allen (ankle) left the game in the first quarter. He tried to return to for one play but then returned to the sideline and limped to the locker room. ... LB Isaiah Irving (neck) left the game on a stretcher after being injured on a special teams play late in the second quarter. ... DL Jordan Phillips (hamstring) left the game in the second half and didn't return. ... RB Kenyan Drake was hurt late in the fourth quarter after a 2-yard run and didn't return. The injury wasn't disclosed.

Seahawks: They'll face another NFC West opponent when they host the San Francisco 49ers on Sunday.

Cardinals: Arizona enters its bye week. The next game is on Nov. 8 at home against the Dolphins.