Back from bye, healthier Ravens await showdown with Patriots 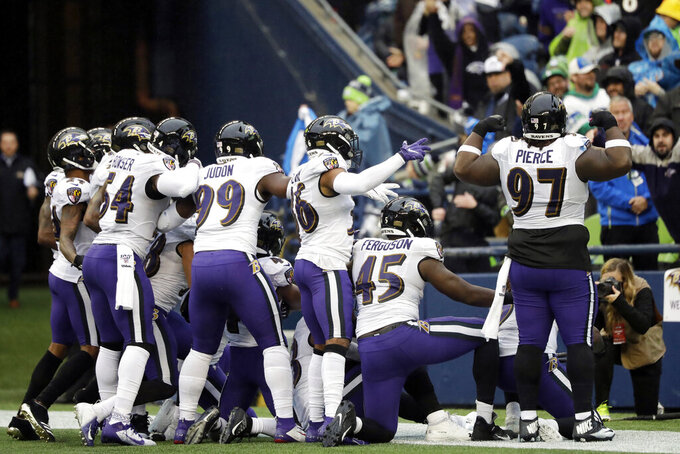 Baltimore Ravens players take part in a group photo touchdown celebration after cornerback Marlon Humphrey recovered a fumble and ran for a touchdown during the second half of an NFL football game against the Seattle Seahawks, Sunday, Oct. 20, 2019, in Seattle. (AP Photo/John Froschauer)

Smith hasn't played since leaving the season opener with a knee sprain against Miami. He will provide depth in a backfield that should be tested by Patriots quarterback Tom Brady.

"Getting Jimmy back, it's been a long time now," Harbaugh said. "He had a good training camp. If we can get him back, it would be huge for us. I'm excited about it. I hope it works out."

Now in his ninth year, Smith hasn't played a 16-game season since 2015. He will be a welcome addition to a defensive backfield that has lost Tony Jefferson, Tavon Young, DeShon Elliott to injury.

Looking to fortify a pass rush that has only 12 sacks, general manager Eric DeCosta signed defensive end Ufomba Kamalu off the Patriots practice squad. The 6-foot-6, 300-pounder has 12 tackles and three sacks in 15 games over his career but has not played this season.

Still, Harbaugh is counting on Kamalu to make an immediate impact.

"Big, strong player," the coach said. "He's kind of trying to find his way right now, but we thought he was a good fit in our system — the way he plays with his hand, he squares. He's a physical guy."

The Patriots (8-0) own the best record in the NFL and will surely serve as a test for the Ravens, who have won three straight and own a healthy lead in the AFC North.

"All the games are exciting, but this is even more exciting because you're playing the defending champs," Harbaugh said. "Obviously they're playing great. Very well-coached football team, always are. Very smart football team, tough football team. It gets you fired up. It's what you're in this business for."