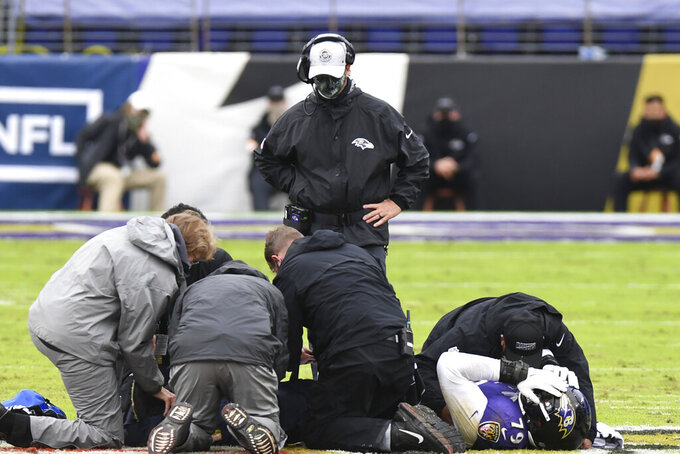 FILE - Baltimore Ravens offensive tackle Ronnie Stanley (79) reacts to first half injury against the Pittsburgh Steelers during an NFL football game, Sunday, Nov. 1, 2020, in Baltimore. DeCosta feels the Ravens have generally been pretty conservative in the draft when it comes to injuries. That's a relevant issue after a decimated Baltimore team dropped six straight at the end of last season to miss the playoffs. The Ravens will certainly hope for better luck in 2022. (AP Photo/Terrance Williams, File)

LAST SEASON: The Ravens lost six straight games to end the season as injuries — including to star quarterback Lamar Jackson — finally became too much to overcome. Jackson got off to an impressive start and looked like an MVP candidate early on, but he wasn’t available at the end because of ankle problems. Baltimore got a terrific season from tight end Mark Andrews, and Jackson put up good passing numbers for a while, but the secondary was depleted by the end of the season, and the Ravens finished last in the NFL against the pass. Baltimore replaced defensive coordinator Don Martindale after the season.

OUTLOOK: The Ravens used one of their two first-round picks last year on outside linebacker Odafe Oweh, and they may look for another defensive prospect this year. They certainly have room for improvement on that side of the ball, whether it’s adding another pass rusher, some help in the middle of the defensive line or some depth in the secondary after last season’s injury problems. The offensive line isn’t totally settled either, in light of Villanueva’s retirement and Ronnie Stanley’s injury problems. Baltimore has nine picks in the first four rounds, including five in the fourth. So the Ravens have flexibility to move around if they desire.