Barkley, Golladay among five players out for Giants 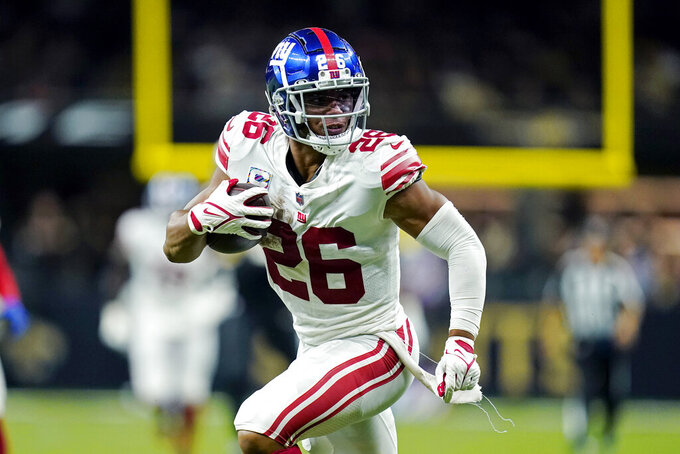 New York Giants running back Saquon Barkley (26) carries in the second half of an NFL football game against the New Orleans Saints in New Orleans, Sunday, Oct. 3, 2021. The Giants won in overtime 27-21. (AP Photo/Brett Duke)

Receivers Sterling Shepard and Kadarius Toney, who were inactive last week, are both listed as questionable with hamstring and ankle injuries, respectively. Tight end Kaden Smith (knee) is also questionable. Toney played one series against Rams two weeks ago before aggravating the ankle injury. He also missed the Panthers game and Shepard missed two games with a hamstring injury.

Coach Joe Judge still expressed caution when asked if he was optimistic Toney would play. The rookie wideout aggravated an ankle injury against the Rams and sat out last week's victory against Carolina.

“He’s got a little bit of extra time this week, obviously, with it being a Monday night game,” Judge said. “The plan is to bring him on the trip and see where he’s at.”