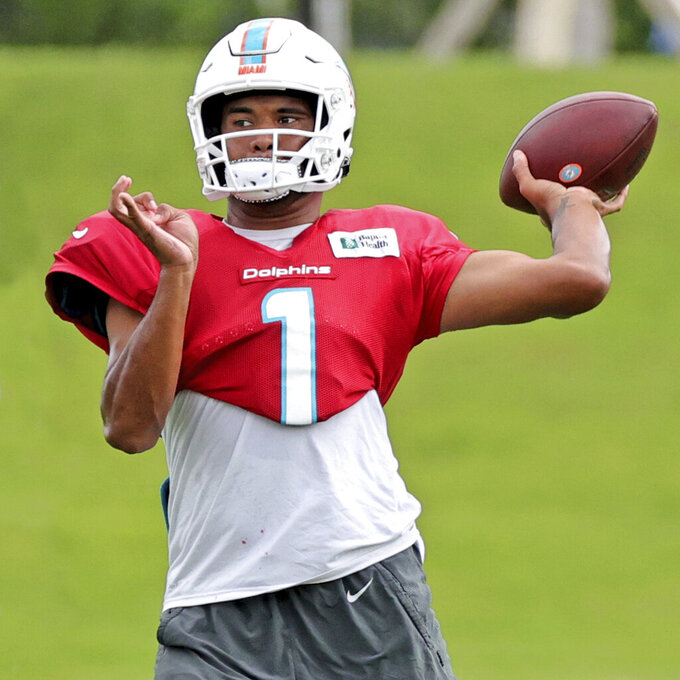 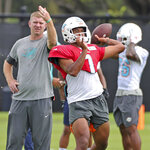 Barring a setback, Miami quarterback Tua Tagovailoa is ready for his comeback.

Tagovailoa returns to his starting role Sunday when the Dolphins play the Jacksonville Jaguars in London, after missing most of the last four games — all of them Miami losses — with fractured ribs.

Dolphins coach Brian Flores made the announcement Friday, a few hours after the team made the overnight flight from Miami to England.

Not all the injury news was good for Miami on Friday, though. The Dolphins ruled cornerback Xavien Howard (shoulder, groin) and wide receiver DeVante Parker (shoulder, hamstring) out for Sunday.

Tagovailoa being back sets up a rematch of the quarterbacks from the College Football Playoff national championship game from the 2018 season, when Clemson topped Tagovailoa and Alabama 44-16. Trevor Lawrence played quarterback for Clemson in that game; the No. 1 overall pick in this year's draft is in line to start for Jacksonville (0-5) on Sunday at Tottenham Hotspur Stadium.

He said this was his first trip out of the U.S.; one of his initial takeaways was how he'd never seen driving on what Americans would consider “the other" side of the road, as is done in England.

“It's awesome. It's different," Tagovailoa said.

The Dolphins can only hope his return brings different results, too.

All signs were pointing toward Tagovailoa's return to the lineup throughout the week, starting with the Dolphins designating him for a return off what was a three-week stint on injured reserve. He was hurt during the second series of Miami's Week 2 loss to Buffalo, fracturing the ribs on a first-quarter sack by A.J. Epenesa.

He practiced Wednesday and Thursday, without major issues, which put him in line for the start.

“Tua has stepped in and just been him," Dolphins wide receiver Jaylen Waddle said.

Jacoby Brissett started each of Miami's last three games while Tagovailoa was on injured reserve. The Dolphins beat New England in the season opener with Tagovailoa playing, and are 0-4 since — plummeting to near the bottom of the NFL in virtually every major offensive category.

“The way I kind of look at it, all 11 have to go out there and do our jobs," Tagovailoa said.