Bears' Nagy assumes decision on his fate comes after season 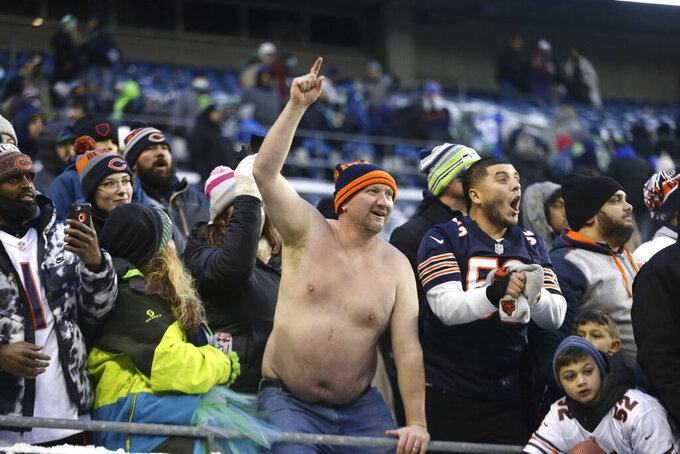 LAKE FOREST, Ill. (AP) — Matt Nagy is operating as though he’ll be the Chicago Bears' head coach at least through the end of this season.

It’s an assumption much easier to make, even with a 5-10 record, considering the way the Bears rallied under difficult conditions in Sunday’s 25-24 comeback win over the Seattle Seahawks.

They continue to play hard and coach as if there will be more after this season for the coaching staff, even if it looks bleak.

“So really, as we know going into these final two games, not being able to make the playoffs, we have an obligation to do that — that’s it, plain and simple,” Nagy said. "If I'm not doing that, then I’m letting someone else down on this team, whether it’s a player or coach. It’s just real simple; that’s not going to happen with me.

“I, and we, all owe that to each other for today and for this week with the Giants and finishing out this week on a high note trying to get a win and then doing it again in the final game of the season."

Without their top two quarterbacks and Nick Foles starting for the first time in a season and a half, and without key players such as wide receiver Allen Robinson, cornerback Jaylon Johnson and defensive end Akiem Hicks because of COVID-19, the Bears rallied in the fourth quarter to win.

Still, rumors about Nagy’s possible firing have persisted since the false report that he would be fired just after Thanksgiving.

He said he has regular communication with general manager Ryan Pace, board chairman George McCaskey and president Ted Phillips, but nothing has changed in this regard.

“We stay on the same path as far as the communication that we have with George, Ted, Ryan and myself; nothing’s changed there,” Nagy said.

The question the Bears face for this week is if they’ll have Foles back at quarterback after he threw for 250 yards on 24 of 35 without an interception, including a touchdown to Jimmy Graham to set up the winning points on a 2-point conversion pass to Damiere Byrd.

When they get ready to host the Giants in the next-to-last game Sunday, the Bears will have several players back from the reserve/COVID-19 list, including starting wide receiver Allen Robinson, cornerback Jaylon Johnson and safety Tashaun Gipson. All missed Sunday’s game, but were cleared Monday to return.

They also hope to get back quarterback Justin Fields, but his return from an ankle injury this week is uncertain. Nagy did say they didn’t plan to put Fields on season-ending injured reserve. He was injured in the Week 16 loss to Minnesota.

“We’re not going to put him at risk. And he knows that.”

Players did note a difference in having an experienced Super Bowl MVP at quarterback for the final touchdown drive against Seattle.

“When you've got somebody like, as seasoned as him, he knows what it looks like,” running back David Montgomery said. “When he’s calm, I mean, you can’t do anything else but be calm. He’s got the most pressure on him. He’s the quarterback. So to have him as calm and poised as he is, um, it’s special. So we just kind of follow his lead.”

The passing game. Whatever the statistics for Foles, the best thing he might have done or didn’t do was turn over the ball. Only one team has a worse turnover ratio (minus-13) than the Bears and only two have turned it over more than the 25 times they’ve done this. Foles had passes out in time and on target, allowing for what Nagy called their best yards after catch game of the year.

“That part, again, that’s effort,” Nagy said. “You’re not getting tackled for a catch/tackle for 1-yard gain. You’re getting extra yards. There was a lot of those plays.”

The running attack. A 20-yard run off left tackle by Khalil Herbert accounted for one of their touchdowns, but beyond that they had only 68 more yards rushing and averaged only 2.9 yards overall. The lack of a running game plagued them whenever they had Foles at quarterback last year and used a lot of shotgun formations as they did Sunday, rather than playing with the quarterback under center.

Foles. He was considered potential trade bait in the offseason and into the regular season, but nothing materialized. His effort Sunday called into question whether Chicago actually ever needed to make the free agent signing of QB Andy Dalton when they had a veteran who could play until Fields was ready.

Cornerback Thomas Graham Jr. After making his NFL debut with three pass breakups against Minnesota, Graham alternated at cornerback with Artie Burns back on the field and gave up a 41-yard touchdown pass from Russell Wilson to DK Metcalf.

Rookie LT Teven Jenkins suffered a shoulder injury and had to leave the game. Rookie backup RT Larry Borom replaced him and finished the game at the position. The Bears will be watching Jenkins’ injury, the one to Fields and also a groin strain suffered by Dalton as they begin preparations to face the Giants.

7 — The Bears converted half their 14 third-down plays Sunday, a major improvement considering they rank 30th in the league with a 34.6% conversion rate.