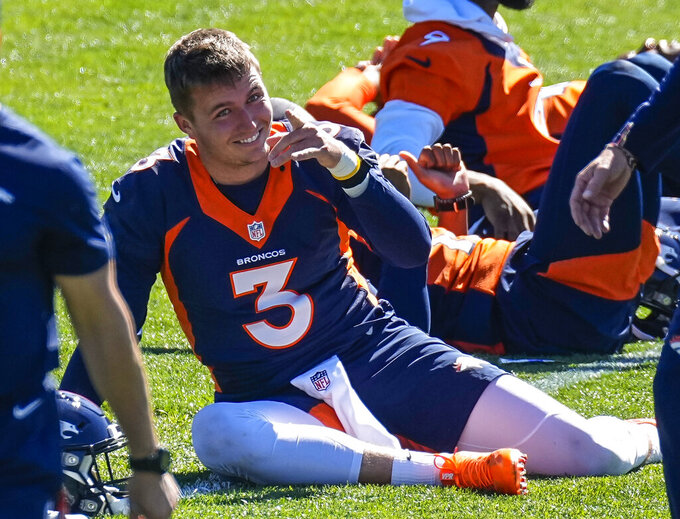 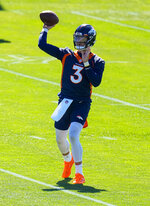 So, technically, Lock and Teddy Bridgewater were still competing one last time before summer break, just not in football.

And that was a sore point on the area airwaves filled with grumbling that a team coming off a 5-11 record, mired in a five-year playoff drought and immersed in a QB competition wasn't capitalizing on every snap it could get.

Former Broncos O-lineman Orlando Franklin, now a host on 104.3 The Fan radio station in Denver, noted that when Fangio scuttled his final minicamp practice for a field day in 2019, that decision followed an intense offseason program.

This time, Franklin noted, Fangio had already cut back on the intensity to appease players who boycotted the start of the voluntary offseason training program and only had them do 11-on-11 drills a handful of days.

Both quarterbacks who are seeking to make comebacks in 2021 said they planned to continue working with their receivers in the six weeks before training camp opens July 28.

Bridgewater added that Lock will join them.

“It’ll be fun,” Bridgewater said. “Whenever you can get around the guys that’s not always football, it creates and forms that bond and that camaraderie.”

Bridgewater, who was acquired from the Panthers on the eve of the NFL draft, and Lock have each have had their moments so far, but Fangio cautioned against jumping to any conclusions just yet.

“Coaches and everybody else likes to evaluate every day, but to me, the big evaluation will come more in camp,” Fangio said, adding that "the evaluation and comparing the two is 2% to 3% these last few weeks. The 97% to 98% of it has yet to come.”

Fangio plans on splitting the snaps at training camp and may not name his starting quarterback until after the third and final preseason game on Aug. 28.

Both Lock and Bridgewater are looking for bounce-backs in 2021.

Lock's 15 interceptions last season tied for the league lead. He threw 16 TD passes and went 4-9, missing time with a shoulder injury and for violating COVID-19 protocols.

Bridgewater's lone season in Carolina wasn't good, either. He went 4-11 with 15 TDs and 11 interceptions, and he acknowledged this week that he shouldn't have continuing playing after suffering a knee injury against the Buccaneers in Week 10.

Bridgewater completed 72% of his throws for 13 TDs, seven interceptions and a 98.7 passer rating before he got hurt. Afterward, his completion percentage dipped nine points and he threw just two TD passes to go with four interceptions and a 78.8 QB rating.

“I had something on the inside of my knee. I can’t even remember what it was. But it lingered for the rest of the season,” Bridgewater said, adding he didn’t shut it down because “I just love competing. I never take an opportunity to go out there and compete for granted.”

His knee is now healthy, he said.

Lock found himself competing for his job this offseason after George Paton succeeded John Elway as general manager and traded for Bridgewater.

Bridgewater arrived last month but his crash course in the offense was mitigated by his familiarity with offensive coordinator Pat Shurmur, whom he worked with in Minnesota early in his career.

As for Lock, he said "it's been a really fun offseason” working with Shurmur and finetuning details instead of focusing on the big picture like they had to last year after the pandemic-induced virtual offseason and cancellation of the preseason.

Lock said he and Shurmur have gotten much more comfortable with each other after finally clicking late last season.

“He’s been extremely cooperative with what I say I like or what I say I don’t like,” Lock said. "We’ve meshed really, really well this offseason and added a couple new things he thinks might fit the style of game that we play.”

And, Lock said, “I think the chemistry with the receivers is definitely taking strides forward.”

While quarterback competitions blunt the work the No. 1 offense gets with its leader during camp, Jerry Jeudy said the flip side of having two QBs means receivers can't get complacent.

These two are vastly different, too, Jeudy noted: whereas Lock throws a heater, Bridgewater throws “more of a floater.”

Bridgewater had a better description.