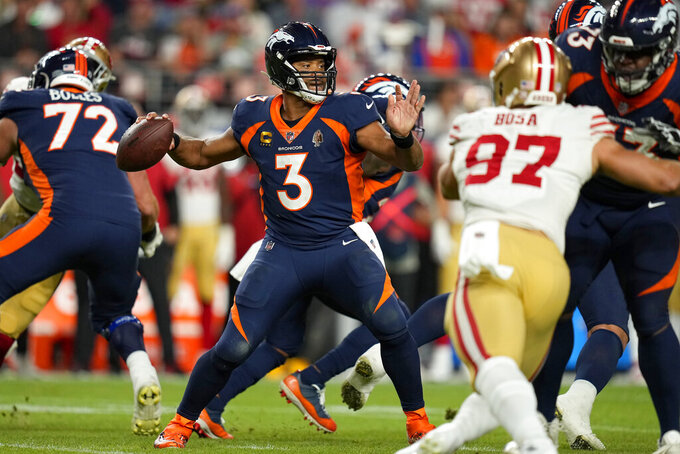 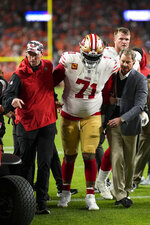 DENVER (AP) — Nine three-and-outs. No touchdown passes. Only 126 yards passing. It was one of the ugliest games of Russell Wilson's storied career.

To him, it was a thing of beauty.

“We're still learning each other as a whole new system,” Wilson said after the Broncos grinded out an 11-10 win over the San Francisco 49ers on Sunday night. “There's so much greatness in store, and I can't wait for it.

"But just watching our defense battle, battle, battle ... everyone believed in each other and that's what football is all about."

The Broncos are 2-1 atop the topsy-turvy AFC West after Melvin Gordon atoned for two fumbles with a late 1-yard touchdown run and safety Kareem Jackson recovered Jeff Wilson Jr.'s fumble with 1:05 left to preserve the hard-fought win.

“That’s a Super Bowl caliber football team on the other side,” said Russell Wilson, who improved to 17-4 against San Francisco and 9-2 against Kyle Shanahan.

The Broncos' only sustained drive was a 12-play, 80-yarder that included a 12-yard scramble by Wilson and a 19-yard dart to Courtland Sutton at the San Francisco 5.

“Really, in the fourth quarter I had to move my legs,” said Wilson, who didn't show much of his mobility in the first two weeks with his new team.

After Gordon scored with 4:10 remaining, Wilson's 2-point pass was batted down, leaving the Broncos clinging to a one-point lead.

Garoppolo, in his first start for the injured Trey Lance, who broke an ankle in Week 2, drove the 49ers to midfield but his pass to Deebo Samuel was tipped by Jackson and intercepted by linebacker Jonas Griffith at the Denver 42 just before the 2-minute warning.

The Broncos went three-and-out again and the Niners got the ball back at their 15 with 1:42 remaining after Ray-Ray McCloud recovered his own muffed punt.

Bradley Chubb sacked Garoppolo for a 12-yard loss to the San Francisco 3. Then, Jeff Wilson hauled in the pass and coughed up the football on a hit from P.J. Locke. Jackson scooped up the loose ball with 65 seconds left at the 49ers' 24.

Before Gordon's score, Garoppolo's 3-yard strike to Brandon Aiyuk in the first quarter stood as the only touchdown on the night.

Garoppolo and the 49ers may never have been happier for a safety, because he stepped out of the back of the end zone while tossing a pass that Chubb picked off at the 3 for what the Broncos thought was a pick-6 that would have erased their 7-3 deficit.

But it was a safety, leaving the 49ers clinging to a 7-5 lead in the third quarter.

“Wish he wouldn't have stepped out on that one," Broncos coach Nathaniel Hackett said.

Garoppolo isn’t the only NFL quarterback to lose track of where he was on the field and step out of the back of the end zone. It infamously happened to Dan Orlovsky on Oct. 12, 2008, while playing for the Detroit Lions. Orlovsky was trying to get away from Minnesota defensive end Jared Allen when he stepped out of bounds numerous times before the play was stopped.

San Francisco star left tackle Trent Williams injured an ankle on the play and was done for the night, replaced by Jaylon Moore.

“Trent's a warrior. Hopefully he bounces back fast," Garoppolo said. "It's always tough when you lose a guy like that.”

San Francisco was all set to trade Garoppolo away this spring, but he needed shoulder surgery in March which dampened any potential interest early in the offseason.

By the time Garoppolo was healthy there were no starting jobs available so he opted to stay in San Francisco on a reduced salary following an awkward training camp where he threw on his own on a side field and didn’t attend any meetings while the rest of the Niners prepared for the season.

That disconnection showed up Sunday night as the Niners converted just one third down out of 10.

“We were terrible today. I've just got to get on the same page with those guys. We have to convert those," Garoppolo said.

“Oh yeah, my arm is feeling it right now,” Garoppolo said. “I didn't really go through training camp. I'm not trying to make excuses or anything, but I've just got to get in game shape and get rolling.”

Linebacker Josey Jewell made his 2022 debut after missing two games with a calf injury and he recovered a fumble by Garoppolo at the 50-yard line early in the third quarter. He also had one of Denver's four sacks and one of the Broncos' three takeaways.

“That was awesome to get back out there with the guys,” said Jewell, who led Denver with nine tackles, including two for a loss.

The 49ers host the Rams on Monday night, Oct. 3, and the Broncos visit the Raiders on Sunday.