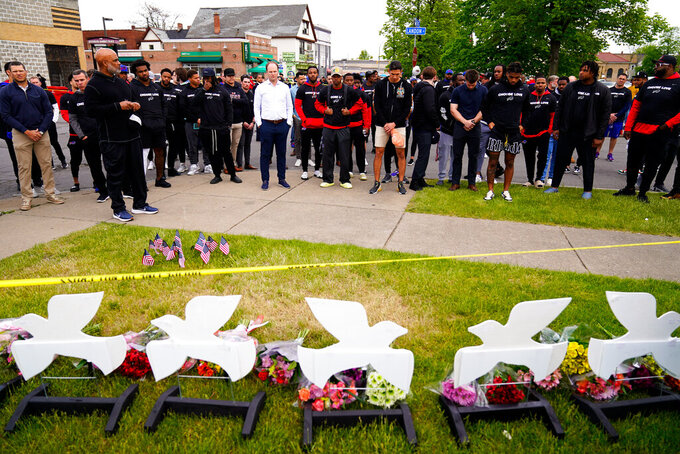 Members of the Buffalo Bills visit the scene of Saturday's shooting at a supermarket, in Buffalo, N.Y., Wednesday, May 18, 2022. (AP Photo/Matt Rourke)

BUFFALO, N.Y. (AP) — Buffalo resident Jamie Lash was giddy as Buffalo Bills player Josh Thomas draped his arm around her shoulder and smiled for a picture Wednesday. It was a rare moment of lightness in a week spent mourning the violent deaths of 10 people at the Tops supermarket where she used to work.

“It means unity. It means support,” Lash said, adjusting the Bills cap someone else from the team had placed on her head.

“We see the Bills mafia everywhere supporting us,” said Thomas, a defensive back on the team.

He was one of dozens of players and staff from the NFL team, the NHL's Buffalo Sabres and the Buffalo Bandits professional lacrosse team to emerge from four tour buses at the scene of Saturday's racist attack, where they laid flowers, dished out food and handed out groceries.

The first stop was a group visit to a memorial at the edge of the store's parking lot, where several players placed flowers in front of cut-outs of doves, each bearing the name of a victim.

“It’s real, going to the actual site and putting flowers down and seeing the people that were affected,” Bills tight end Dawson Knox said. “I still can’t truly wrap my mind around it, but it definitely hits differently actually being here.”

Like many in the group, Bills offensive lineman Dion Dawkins wore a shirt that said “Choose Love.”

After six years in Buffalo, “I am part of this community,” he said, calling the attack “a sad act.”

“Somebody planned an attack," Dawkins said, "did the demographic of this community, said ‘This is where they are at the most, let’s attack there,’ and that’s what they did," he said. “I see it more as a terrorist attack to a background of people.”

From behind tables, quarterback Josh Allen and other players served hot meals of chicken alfredo with broccoli and handed out lettuce, radishes and other produce to residents.

“This week has been terrible," said Shervon White, who lives near the store and came early to see the team. "Just seeing the community come together means so much. To see the Bills come here, it kind of lightened the spirit of the area.”

Twelve-year-old Christopher Boyd smiled at the turn his week had taken as he met players from the Bills team he loves.

“When it first happened I kind of felt unsafe in my home a little bit," he said.

“When I’m here today and I see the Bills,” Christopher said, "I just feel like they are giving back to the community. They are showing love as we show them when they’re playing on the field. It’s just one big happy family, community.”

The Buffalo Bills Foundation said it would donate $200,000 to relief efforts, an amount that will be matched by the NFL Foundation, the team said on Twitter.

“This is about just filling the gap that’s in our world today with love and bringing people together," Buffalo Bills Coach Sean McDermott said. "When you affect one person in our community, you affect all of us.”