Burrow leads Bengals to 1st win of season, 27-12 over Jets 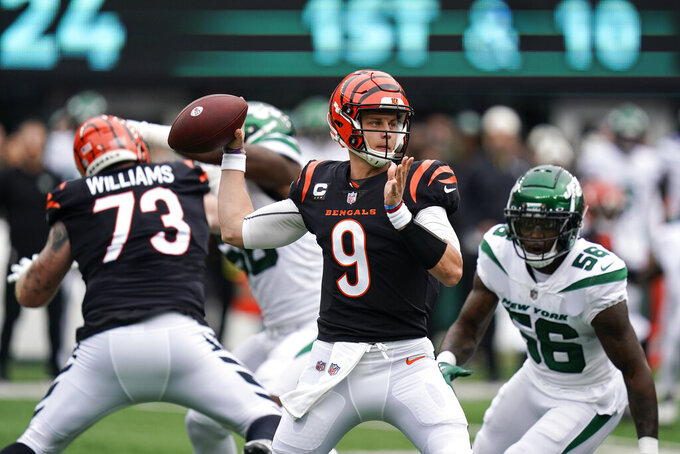 Cincinnati's quarterback then started rolling quickly and gave them something to cheer about.

Burrow threw three touchdown passes and the defending AFC champions got their first victory of the season, rolling past the New York Jets 27-12 on Sunday.

“We came out aggressive,” Burrow said, “and it paid off for us.”

After opening 0-2 with a pair of three-point losses during which they trailed by at least two TDs, the Bengals won the coin toss, took the ball and got going right away against the Jets — who fell flat after a stunning comeback win last week at Cleveland.

“We felt like we were a good team,” Bengals coach Zac Taylor said. “We weren’t changing anything about us internally. We just know that the season’s going to balance out. We’re going to start to gather steam and that’s what we did today.”

Burrow finished 23 of 36 for 275 yards with TD throws to Samaje Perine, Tyler Boyd and Ja'Marr Chase.

“The past two weeks, we weren’t being us, making mistakes, jumping off, false starts," said Tee Higgins, who had five catches for 93 yards. "This week, we locked in.”

Joe Flacco, who led the Jets' 13-point rally in the final 1:55 last Sunday, struggled against the Bengals in what will likely be his final start with the injured Zach Wilson expected to return next week. Wilson, injured in the preseason opener, is recovering from a bone bruise and arthroscopic surgery on his right knee.

Flacco was 28 of 52 for 285 yards and two interceptions, and was under pressure all game.

The fans at MetLife Stadium chanted a few times to play backup Mike White — who rallied the Jets to a 34-31 win over the Bengals last season.

Meanwhile, Burrow marched the Bengals (1-2) down the field on an 11-play opening drive, capped by Perine's 12-yard touchdown catch.

Burrow was 8 of 10 for 95 yards on the drive during which Cincinnati thought it got into the end zone two other times. Boyd had a 4-yard TD catch wiped out by a holding penalty on guard Cordell Volson. Two plays later, Higgins' acrobatic catch was ruled — and upheld by video review — out of bounds in the end zone.

“Finally, I can sit up here and say we started fast,” Taylor said. “We started clean. We got the ball in the end zone three times on that first drive. The third one counted.”

And the Jets (1-2), who got four field goals from Greg Zuerlein, couldn't muster much other than mistakes.

John Franklin-Myers was called for unnecessary roughness after landing on Burrow, whose third-down throw was incomplete. Given a new set of downs, the Bengals took advantage. Burrow threw to Boyd, who avoided a tackle by Jordan Whitehead and raced for a 56-yard touchdown to make it 14-6.

On Cincinnati's next drive, Burrow completed a 45-yard pass to Higgins, who took a helmet to the head from Lamarcus Joyner. The catch and unnecessary roughness penalty put Cincinnati at the New York 15, and Evan McPherson booted a 22-yarder moments later.

A poorly thrown pass by Flacco on the Jets' next possession was intercepted by Logan Wilson and resulted in McPherson's 43-yarder.

Trailing 20-9, the Jets opened the second half with yet another miscue. Trey Hendrickson had the first of his two strip-sacks of Flacco, B.J. Hill recovered and Burrow hit Chase for a 5-yard touchdown to make it 27-9.

“We just needed to get the first win,” Taylor said. “I didn’t really care what it looked like. I didn’t care if it was 3-0 or 49-3. We just needed to rip that Band-Aid off, get that first win. We’ve been a confident team all along.”

CBS cameras caught Jets defensive lineman Quinnen Williams and defensive line coach Aaron Whitecotton shouting at each other on the sideline at the start of the second quarter. The two were face to face for a moment before players quickly separated them.

Saleh said it was Williams “challenging” the coaches to let the defensive line rush four players instead of a seven-man rush to put pressure on Burrow after Boyd's long TD. “I love the fire,” Saleh said. “We don't need them jawing at each other, but he's being competitive. ... He's not wrong to challenge us."

The Jets inducted two-time All-Pro center Nick Mangold into their Ring of Honor. The seven-time Pro Bowl selection, who spent all 11 of his NFL seasons with New York, closed his halftime speech by cracking open a beer and toasting the fans.

Bengals: DT DJ Reader was ruled out late in the first half with an injured left knee.

Jets: LB Quincy Williams was carted off with a left ankle injury late in the third quarter. ... LT George Fant was replaced by Conor McDermott in the third quarter with a knee injury. ... Rookie WR Garrett Wilson left briefly after taking a shot to the ribs in the second quarter, but returned.

Jets: Complete their four-game swing through the AFC North by traveling to Pittsburgh to face the Steelers next Sunday.