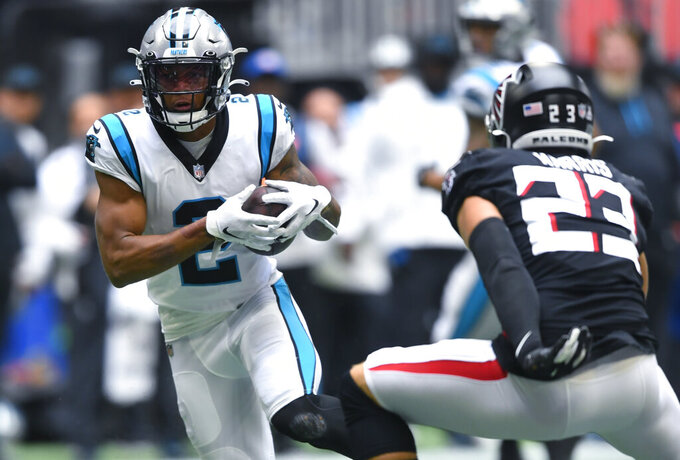 FILE - Carolina Panthers wide receiver D.J. Moore (2) runs against the Atlanta Falcons during the first half of an NFL football game Oct. 31, 2021, in Atlanta. The Panthers agreed to a three-year, $61.9 million contract extension with Moore on Friday, March 18, according to his agent Drew Rosenhaus. (AP Photo/John Amis, File)

CHARLOTTE, N.C. (AP) — The Carolina Panthers front office has been busy since being spurned by Deshaun Watson.

The Panthers agreed to a three-year, $61.9 million contract extension with No. 1 wide receiver D.J. Moore on Friday, according to his agent Drew Rosenhaus. The team also signed four other free agents one day after being informed by Watson’s camp on Thursday night that the QB was not waiving his no-trade clause for Carolina. Watson, the former Houston Texans quarterback, has since joined the Cleveland Browns via trade.

Moore received a contract extension through the 2025 season that included $41.6 million in guaranteed money, according to Rosenhaus.

Moore has 301 catches for 4,313 yards and 14 touchdowns in his four seasons with the Panthers. He's surpassed 1,000 yards in each of the last three seasons, joining Buffalo's Stefon Diggs as the only other wide receiver in the league to accomplish that feat. Moore is fourth on the team's all-time list in yards receiving behind only Steve Smith Sr.﻿, Muhsin Muhammad, and Greg Olsen.

The 6-foot-5, 325-pound Bozeman has started 48 of 49 games the last three seasons for the Ravens. He played left guard in 2019 and 2020 before moving to center in 2021. He's expected to compete for a starting job with Pat Elflein for a starting job at center.

Ioannidis played six seasons for the Commanders and also played under Panthers coach Matt Rhule at Temple. The 6-foot-3, 310-pound Ioannidis had 16 sacks and 27 quarterback hits for the Commanders in 2018 and 2019. However, his production has fallen off the last two seasons with four sacks and 15 QB hits. Ioannidis serves a potential replacement for defensive tackle DaQuan Jones, who signed with the Buffalo Bills.

Wilson﻿, 28, is a seven-year NFL veteran. He played four seasons with the Dallas Cowboys and two with Kansas City, winning a Super in 2019 with the Chiefs. He started 17 games for the Jaguars last season and had a career-high 106 tackles with three sacks, an interception and a forced fumble.